The NSW economy is set to suffer a $1 billion hit due to the shutdown of businesses in Victoria, but the negative effects will be offset to some extent as economic activity shifts to NSW because of restrictions south of the border.

Key economic sectors in Victoria, including retail, construction and manufacturing, will be severely limited under sweeping measures announced on Monday by Premier Daniel Andrews to try and contain the spread of coronavirus. 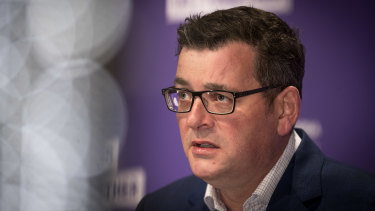 Terry Rawnsley, an expert in Australia’s regional economies, forecasts the cost of Victoria’s stage three and stage four restrictions imposed in response to its COVID-19 second wave will be between $20 and $25 billion during the September quarter.

He estimates the cost to the NSW economy, which is highly integrated with Victoria’s, is likely to be around $1 billion.

But the fallout for NSW will be ameliorated because some economic activity will be diverted from Victoria to other states.

"There is going to be a bit of whack to the NSW economy … because of a loss of trade," Mr Rawnsley said.

"But as some Victorian factories and other businesses are unable to fulfil orders, firms in NSW might actually pick up a bit of the slack."

Melbourne's rising COVID-19 caseload and death toll together with the new restrictions will sap consumer and business confidence across the nation.

ANZ economist Cherelle Murphy said the ANZ-Roy Morgan consumer confidence index for the whole of Australia dropped by almost 10 per cent between the end of May and the end of July.

"There is no doubt that turnaround reflected the worsening situation in Melbourne," she said.

"There will also be fiscal impacts for all, as the need to support Victorian households and businesses drains federal coffers and results in even larger fiscal deficits than the ones the government updated just two weeks ago."

Victoria accounts for about a quarter of Australia’s annual economic output.

Mr Rawnsley estimates the economic damage caused by the recent restrictions imposed in Victoria will reduce Australia’s gross domestic product by around 4 to 5 per cent in the September quarter.

"It’s going to be a definite drag on the national economy having the nation’s second-largest state economy put into what Daniel Andrews called 'pilot-light mode,'" he said.

Rawnsley estimates that 35 to 45 per cent of Victoria’s economy will be directly affected by the latest round of restrictions.

Greater Melbourne has been an important growth driver for the national economy in recent years.

Melbourne contributed almost 40 per cent to national GDP growth in 2018-19, which was the largest contribution of any Australian region and the highest share on record for the city.