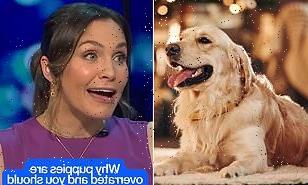 Thinking of adopting a dog this Christmas? Vet says this is the one type of pooch you should consider welcoming into your family

Aussies wanting to welcome a furry friend into their families this Christmas have been advised to consider adopting a senior dog over a puppy.

Veterinarian Dr Amelia Zakiewicz from the Animal Welfare League Queensland said there are many ‘rewarding’ benefits of taking on a senior pets but warns animals should never be purchased or adopted as a gift.

Former Bachelor star Laura Byrne told The Project she thinks puppies are ‘overrated’ and gushed about her senior pup Buster who she called the ‘best dog ever’. 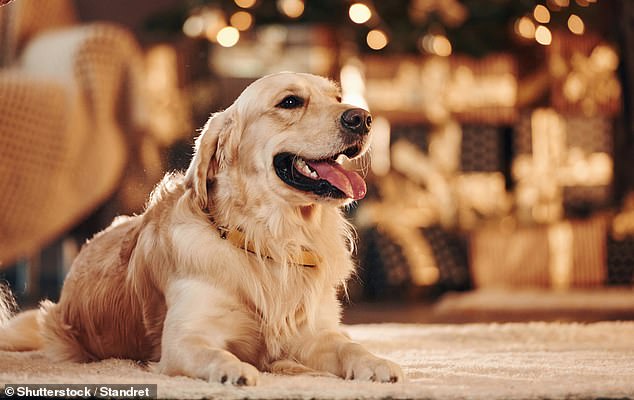 Dr Amelia said families who welcome old pets into their homes will ‘have the joy’ of making their new pet’s twilight years the best of their life.

‘Whether you’re looking for an active senior to go on walks with or a couch potato to help keep you company, plenty of older dogs and cats would love to be your new best friend,’ she told FEMAIL. 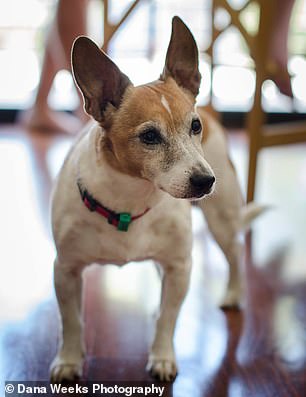 ‘Most senior pets have previously lived in a home environment, so they usually have great manners after acclimating to their new routine. They tend to fit right into their new home like they’ve been with you forever.’

The animal doctor said those looking to adopt a dog this festive season should consider their decision carefully and assess which pet would suit their lifestyle best throughout the year.

‘If people are looking to adopt at this time, then Animal Welfare League Queensland encourages the whole family to be involved in the decision-making process and advises that animals should never be purchased as gifts,’ Dr Amelia said.

‘It is also essential for your new furry family member to be gradually introduced to being left for extended periods. Ensure you do this before you return to work and school in the New Year; otherwise, the animal may suffer from separation anxiety.’

She added that older dogs are often ‘overlooked’ at shelters while on The Project The Lost Dogs Home spokesperson Suzana Talevski said many are in need of homes after many families have had to surrender their pets amid the rising cost of living.

Dr Amelia Zakiewicz: This is what you should consider when adopting a dog

First, consider what’s important to you in a companion animal.

Then, before you visit your local shelter, list what you want, what you don’t want, and what you can compromise on–before you even look.

A little pre-thought will go a long way to ensuring a good fit for both parties.

Whether you’re looking for an energetic canine companion to join you on your morning jog, or a laid-back feline friend to laze with you on the couch, it is essential to research what animal will suit your lifestyle.

Dogs, cats, and other animal companions want to be part of your family. They require daily food, water, exercise, care, and companionship.

Shelters often receive animals because their family don’t realise how much time it takes to care for them.

Many rental properties don’t allow pets; others usually have a 10 kg weight limit.

Make sure you know what they are before you adopt.

Nine-year-old shepherd-cross Kiki was surrendered to the organisation because her family could no longer afford to feed her but Suzana said demand for adult dogs is on the rise.

‘Now especially with the cost of living increasing we are seeing stories such a Kiki’s more and more,’ she said.

‘We’re really happy to say we’re seeing a trend in more older pets bring adopted. We think that’s because people now have a deeper appreciation of how wonderful these older animals are.’ 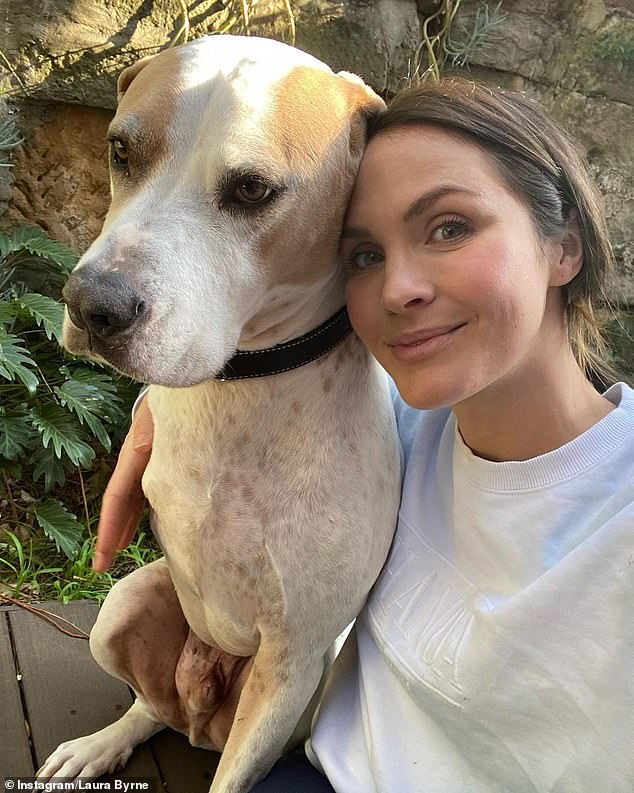 Former Bachelor star Laura Byrne (pictured) said puppies were ‘overrated’ and raved about her senior pooch, Buster, who she adopted eight years ago and said makes the perfect family pet

The podcaster and author caused a stir claiming puppies were ‘overrated’ after she adopted an adult three-legged pooch before her rise to fame on The Bachelor.

‘This is a controversial thing to say but I feel like puppies are overrated because they bark through the night, they pee on the floor, kind of like children, but at least with an older dog you know what you’re getting,’ she said.

Top four reasons to adopt an adult or senior dog

1. You know what you’re getting  As puppies and kittens grow, their temperament and behaviour changes as well as their size while there are generally fewer surprises with an older animal  – they can be a lot more predictable and a safer choice.

In additional to knowing what the adult will look like (especially their size and coat length) and what their personality is, any inherent health issues are likely to already be apparent and being managed effectively.

2. Puppies and kittens can be a real handful Young animals can be challenging at times, and require a lot of time and attention.

One of the benefits of adopting an adult or older pet is that a lot of the hard work has been done for you. They tend to be calmer, are already well-adjusted to family life, and have likely had at least some training.

3. Many older animals are young at heart  Older pets still love to play, and still need exercise and entertainment for their mental and physical wellbeing.

An adult dog will still have lots of energy, and can be a loving addition to your family for years to come; while a senior pet is likely to be a little slower and calmer, with plenty of wisdom and life experience.

4. It’s a feel-good choice Animal shelters have plenty of sweetly-tempered, beautifully-behaved, healthy and active adult and older animals that are there through no fault of their own, and who are regularly passed over for younger pets.

Giving a second chance to an adult or older pet can be a rewarding and valuable lesson to teach the younger members of the household. When you adopt an adult or older pet, you really are giving a home to an animal in need, and you’ve very likely found yourselves a dedicated friend for life.

‘We adopted a dog eight years ago now but he only had three legs and everybody overlooked him because they thought it would be such a complicated dog to have and he has been the best dog.’

The mum-of-two has previously spoken about the benefits of adopting senior dogs and called out the ‘stigma’ many have surrounding rescue pets.

‘I think people often think that rescue animals are damaged or that they’ve been through a lot of trauma and they are going to be difficult house pets but it is really not the case,’ she told the Herald Sun in 2020. 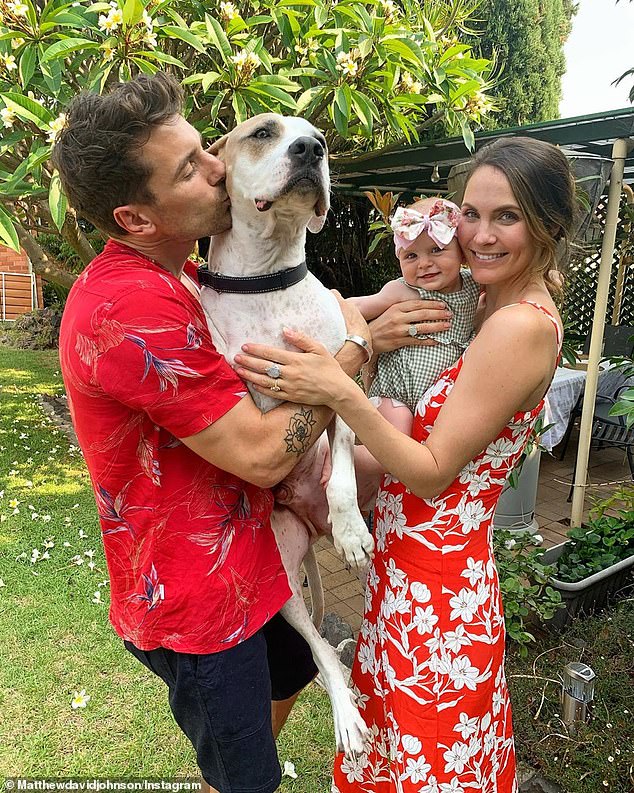 The Bachelor’s Laura Byrne (right)  and Matty ‘J’ Johnson (left) urged people to put aside the ‘stigma’ of adopting a rescue dog after welcoming their beloved three-legged pooch Buster. Pictured with their daughter Marlie Mae

Her fiancé Matthew ‘Matty J’ Johnson admitted to the publication that before dating Laura, he wouldn’t have considered a rescue dog as he believed they were ‘aggressive’.

‘I had that stigma so I am so glad that I met Buster and it has corrected the situation on rescue dogs and what they are actually like,’ he said.

He also explained anyone nervous about welcoming a pet into their home should take them on a ‘road test’ first.

‘What is great about rescue dogs is you have the ability to foster them before you actually commit,’ he said.