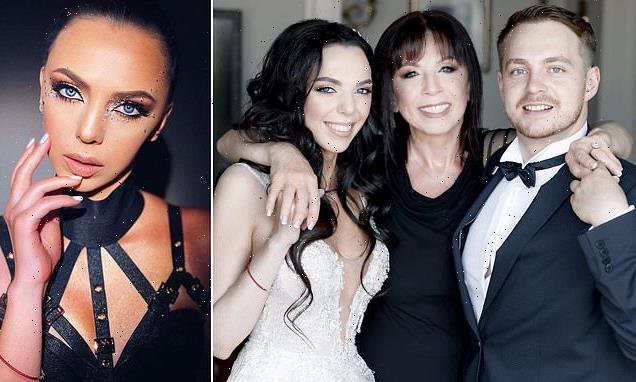 ‘We refuse to leave Ukrainian soil’: Singer who fled Kiev for the country’s west with her ice hockey player husband says they can’t find work and their life pre-war feels like ‘a dream’

A Ukrainian singer who has fled Kiev with her family has said her life before the war feels like ‘a dream’.

Sophia Khliabych-Petrova, 31, who goes by the stage name Sonya Kay, and her husband Oleg Petrov, an ice hockey player, fled their home in the capital ‘within minutes’ of Putin’s invasion on February 24.

They are now living in western Ukraine, which is less affected by the Russian invasion, but have struggled to find work. 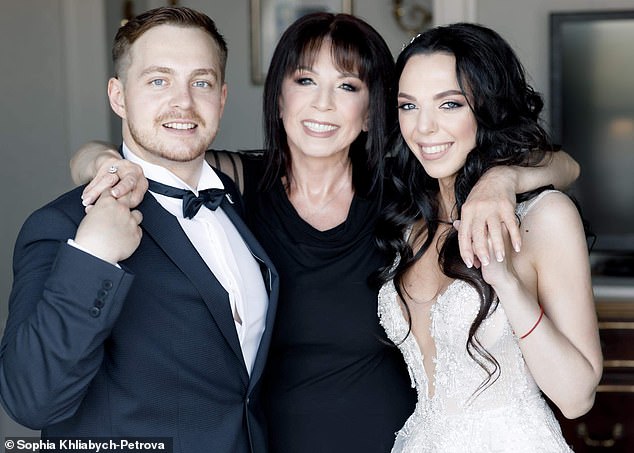 Sophia Khliabych-Petrova, 31, who goes by the stage name Sonya Kay, and her husband Oleg Petrov, an ice hockey player, fled their home in the capital ‘within minutes’ of Putin’s invasion on February 24. Pictured: Sophia and Oleg with Sophia’s mother (centre) 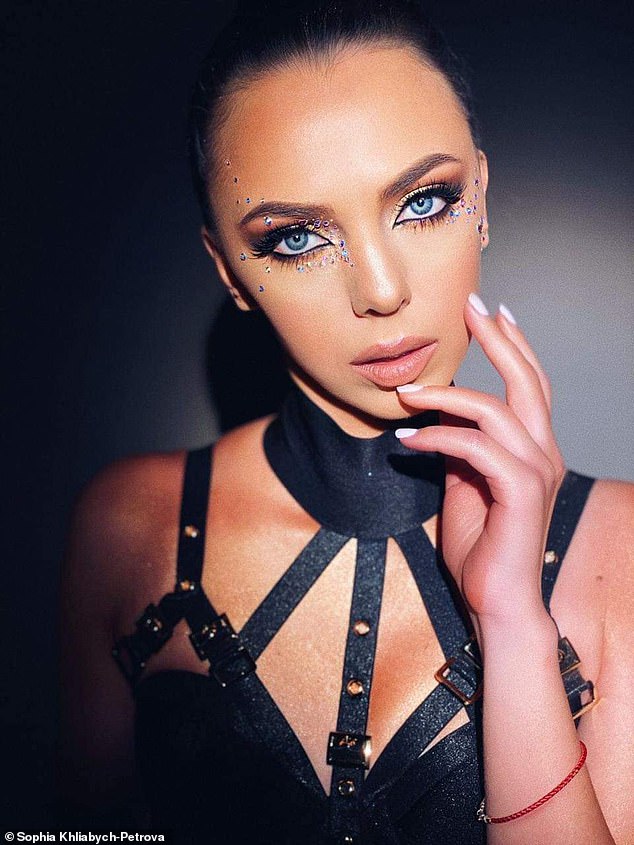 The singer (pictured) is no longer working and has fled her hometown of Kiev with seven family members. She says they are ‘safe for now’ but can hear the sound of sirens

Sophia, who has performed to crowds of thousands, said: ‘We now live very different lives and there is no opportunity to work, but so far we have refused to leave Ukrainian soil. We will stand again and we believe in the brave people of our country.

‘There is no bombing in this area so we are safe for now, and don’t see the point in leaving. We hope we can all go back to our home in Kiev and live our lives.

‘We had plans for the future to enjoy work and travel and now it is like living in a nightmare. We never expected this to happen to us, not in the modern world.’

Sophia and Oleg are with six other family members, including Sophia’s mother.

The singer wakes up to the haunting sound of sirens, but so far has escaped the devastation that’s raged through other parts of the country. 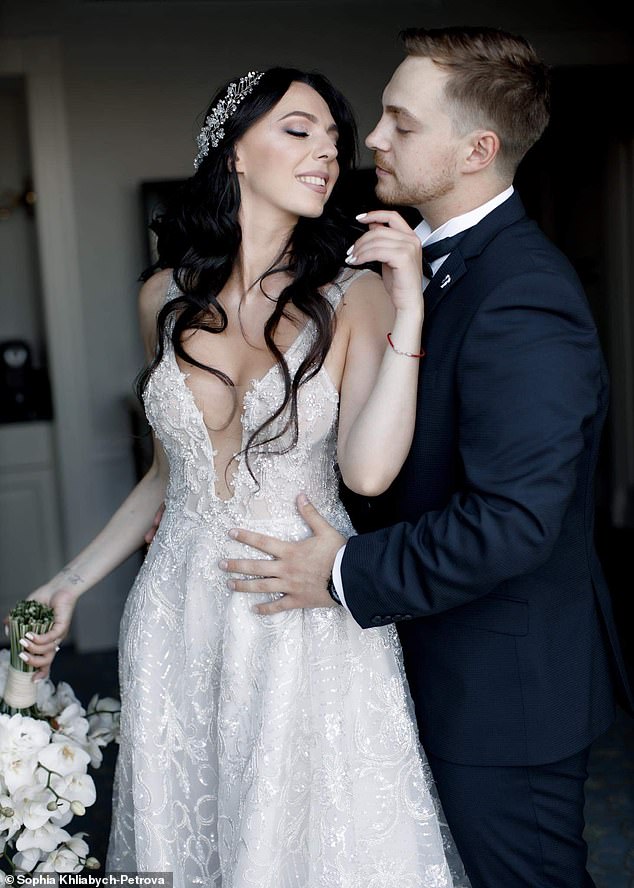 The couple, pictured, had plans for the future after their dream wedding and have been used to a normal lifestyle. They say they just want to ‘travel, explore and be at peace’ 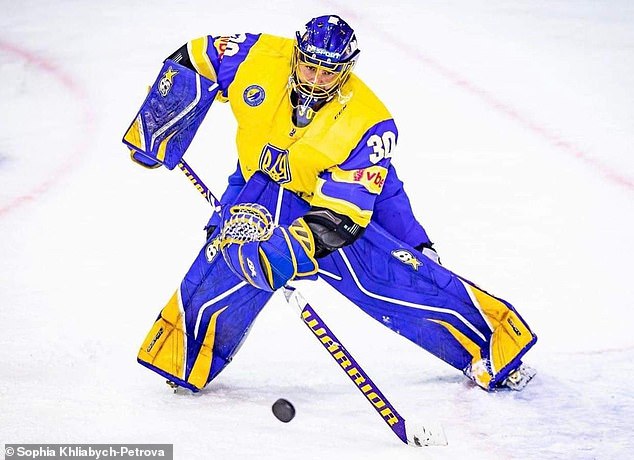 Oleg Petrov is a hockey player, he married Sophia in June 2020. He is now without work as the family shelters in safer western Ukraine

Sophia is best known for her hit Listen to Your Heart, which has racked up more than one million views on YouTube.

She said thinking back to date nights with her husband and trips to the cinema now feel like ‘a dream’.

Sophia is popular with her fans and is known for hits such as ‘Vidchuvaiu’ (Feel) which was released earlier this year, ‘Zaberi’ and ‘Krikhitka’ (Baby).

She has 51,7000 followers on Instagram, many of whom have flooded her feed with messages of support.

Sophia currently supports a charity called Ukraine SOS, where people can donate to help those stranded and displaced by the war, and can no longer work. 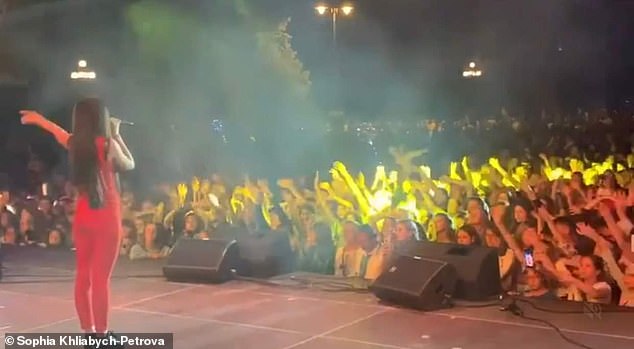 The singer, who goes by the stage name Sonya Kay, is used to performing for large crowds and has had many hit singles in Ukraine. She takes after her parents, who were also singers in the 80s

It comes as a Russian former spy and commander who was instrumental in starting the original conflict said Russia has virtually no hope of winning its war in Ukraine even if it manages to seize the whole of Donbas in the coming weeks.

Igor Girkin – who goes by the nom-de-guerre Igor Strelkov, meaning ‘shooter’ – has given a withering assessment of Putin’s war effort, saying that Russian units are suffering ‘huge losses’ by ‘banging their heads against’ deeply entrenched Ukrainian troops, and are being led by commanders who ‘leave much to be desired.’

Despite Russia making piecemeal gains on the Donbas front in recent days – capturing towns around Popansa and pushing to encircle Severodonetsk – Strelkov says Ukraine is fast-mobilising new troops, rearming using Western weapons, and digging into new defensive positions that will be hard to overrun. 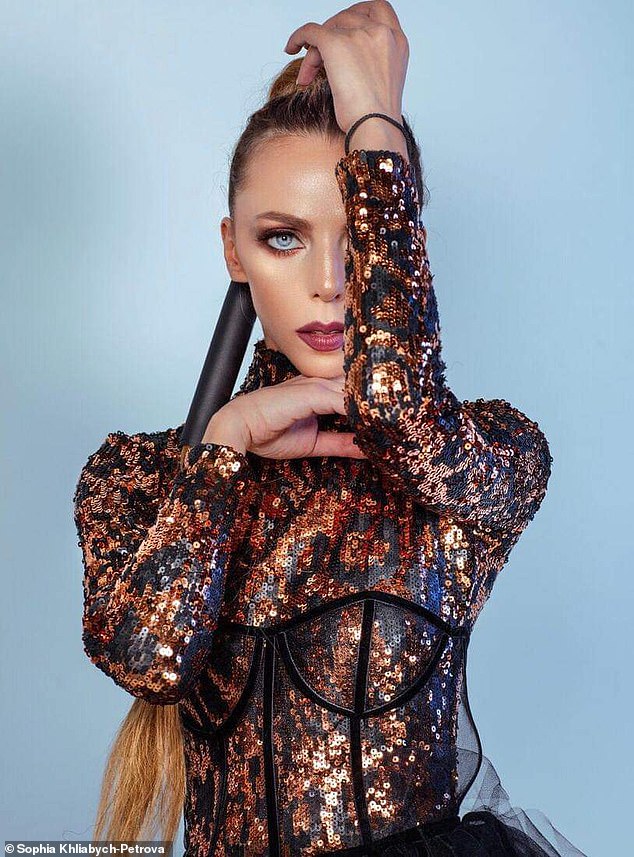 It is ‘meaningless to hope for victory’ without a general mobilisation of Russia’s army, Strelkov argues, which Putin refuses to do because he is being molly-coddled by his inner circle into believing victory is still possible. As long he remains shielded from reality nothing will change, and when it does change… it will be too late to do anything.’

Once the Russian offensive grinds to a halt – something Strelkov predicts could happen as soon as mid-June – Ukraine will then switch to counter attacks as it did around Kyiv and Kharkiv, forcing Putin’s commanders on to the back foot and likely pushing their badly-mauled units backwards – perhaps to their own borders.

But even if no counter-attacks come, Russia will be faced with the prospect of trying to hold a long front line against well-armed and newly-reinforced Ukrainian defenders who will refuse to give up the fight, all the while Russia’s economy will flatline under sanctions.