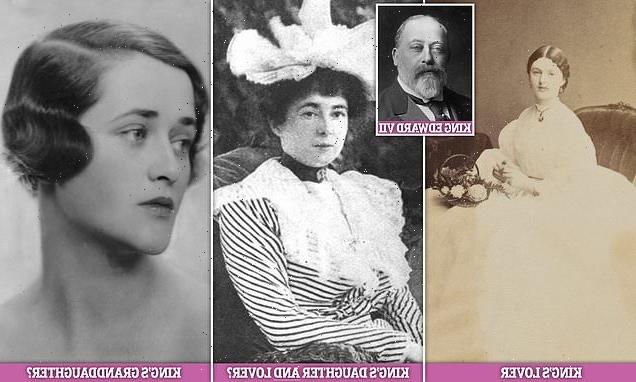 The sordid family history behind a socialite’s treasures: Antiques go up for sale belonging to Audrey Pleydell-Bouverie whose mother was King Edward VII’s mistress – despite rumour that she was also his DAUGHTER

While treasures going up for auction at Christie’s today tell the story of a life lived in the glittering aristocratic circles of 1920s society – behind Audrey Pleydell-Bouverie’s collection of riches lie rumours a sordid family history.

The young hostess was a renowned beauty and prominent member of transatlantic society – flitting between England, America and the continent entertaining a host of famous friends.

Her high-profile pals included Fred Astaire, Winston Churchill and the Queen mother – but Audrey herself was said to be the illegitimate granddaughter of Edward VII, the eldest son of Queen Victoria and Prince Albert.

Her mother, Evelyn Elizabeth Forbes, was rumoured to be both the secret daughter and mistress of King Edward Vll after Audrey’s grandmother, Helen Moncreiffe, had an illicit relationship with the monarch in the years before he met Evelyn.

King Edward VII married Alexandra of Denmark in 1863 but was rumoured to have had multiple affairs throughout his marriage. 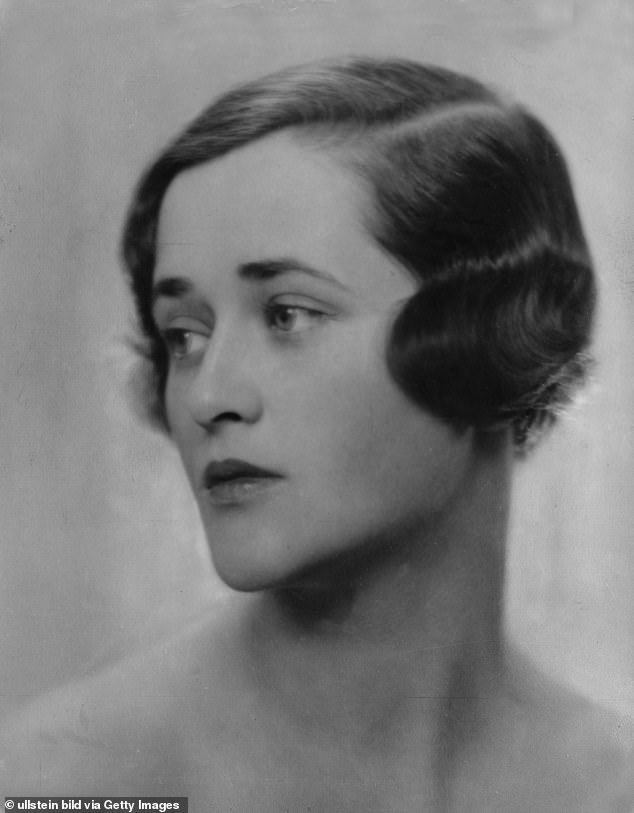 The treasures of transatlantic society hostess Audrey Pleydell-Bouverie, pictured in 1929, are set to go for sale at auction later this month. English socialite Audrey was said to be the illegitimate granddaughter of King Edward VII 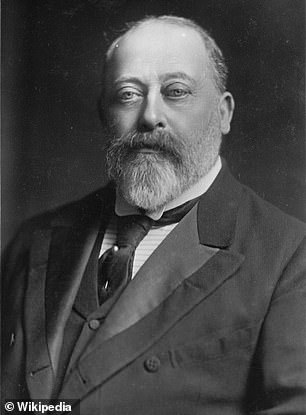 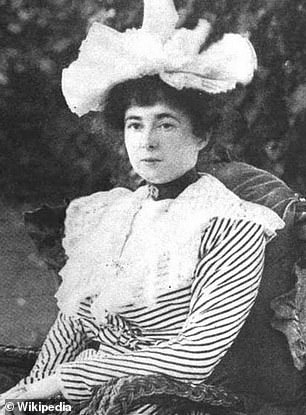 Audrey’s mother Evelyn Elizabeth Forbes (right) was rumoured to be both the secret daughter and mistress of King Edward Vll (left), after her own mother – Audrey’s grandmother – had an illicit relationship with the monarch in the years before they met 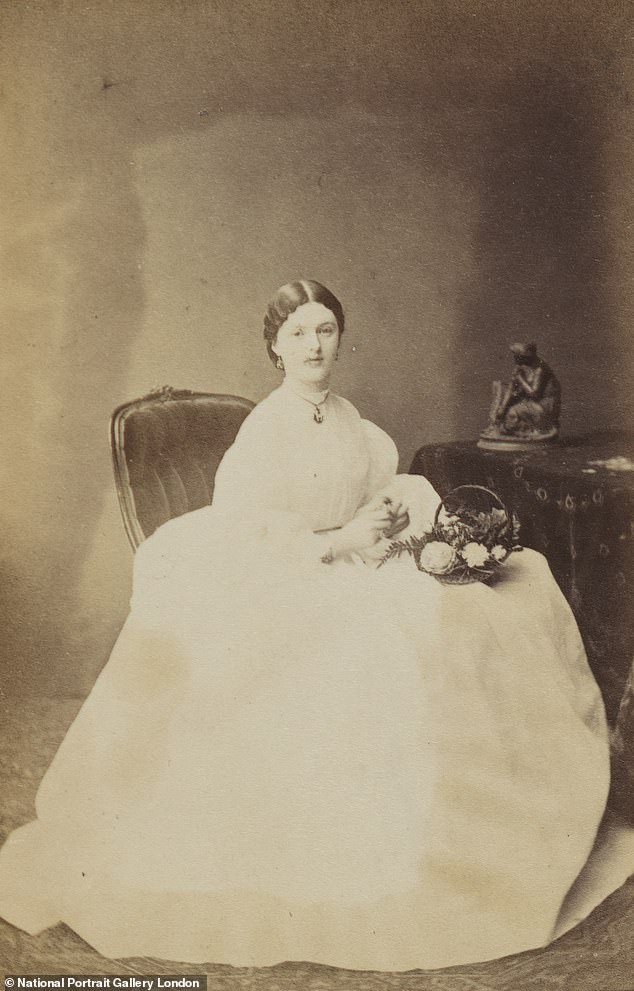 Audrey’s grandmother, Helen Moncreiffe (pictured) was said to have had an illicit relationship with King Edward Vll in the years before the monarch met her daughter Evelyn

Evelyn was known as one of the great hostesses of the Edwardian period, holding raucous, high-profile house parties – with King Edward becoming a regular in the early 1900s.

It’s widely presumed Evelyn embarked on an indiscreet affair with the monarch, supposedly resulting in the birth of her son and Audrey’s brother, Edward James – a renowned British poet and Surrealist.

A well-known ballad by British-French poet Hilaire Belloc mentions the amorous relationship between the socialite and the king, suggesting Evelyn would keep the monarch ‘entertained’ alongside his royal mistress.

However Evelyn’s son, Edward James, hinted that the monarch could in fact be both his father and grandfather, suggesting in his memoirs that the king had already had an affair with his grandmother. 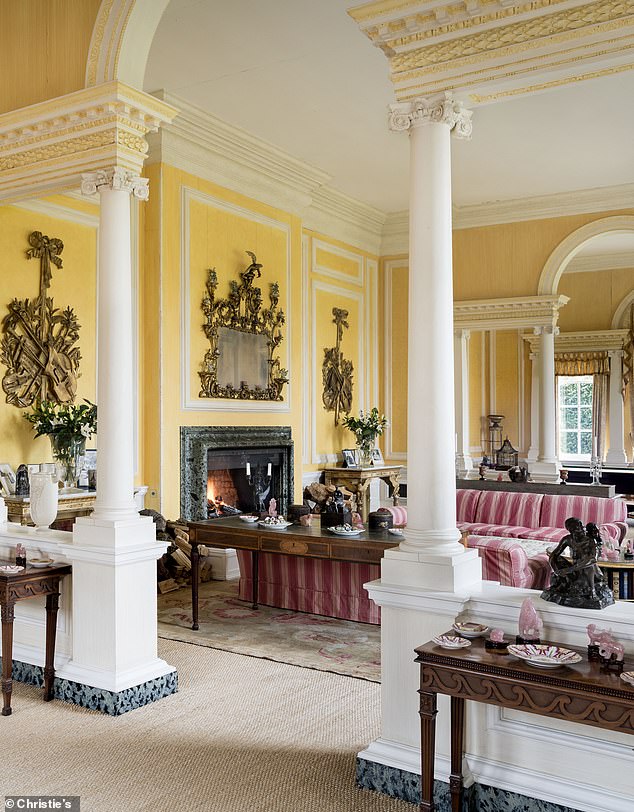 Audrey moved to manor house Julians Park in Hertfordshire from London two years after marrying her third husband. The Jacobean home was remodelled by Stéphane Boudin of Maison Jansen and her collection of artworks moved there. Pictured, the music room of Julians Park

In Swans Reflecting Elephants – My Early Years, James wrote: ‘I was not, I was, in fact, his grandson’ – suggesting that his grandmother also had an affair with the Prince of Wales, making Evelyn both his daughter and his mistress.

Items belonging to Audrey are set to be sold on June 8  at Christie’s in London with the collection including several Impressionist paintings from the society hostess’ personal collection.

Treasures acquired at the socialite’s Hertfordshire home, Julians Park, will lead an auction of seven collections from English country houses, to be offered in a two-part sale with estimates ranging from £150 to £250,000.

A pair of Queen Anne pier glasses, thought to have been made for the Duke of Queensberry, are estimated to fetch up to £120,000. 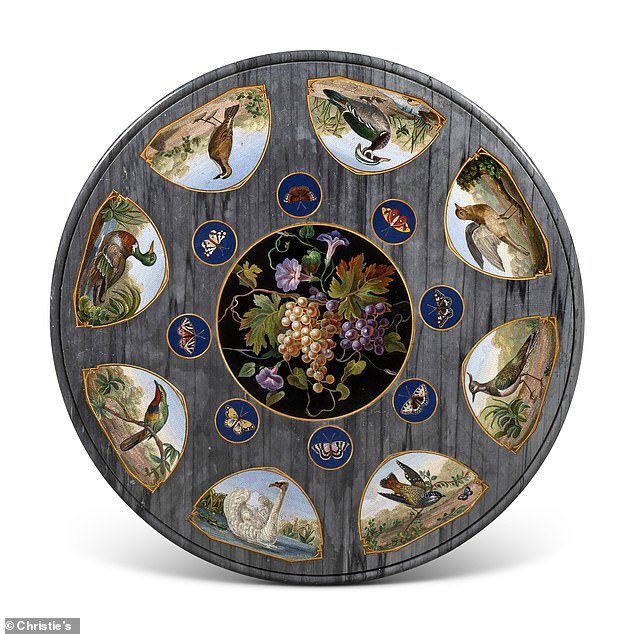 Up for auction is an Italian micromosaic and marble table top on an ormolu and white-painted base, the top attributed to Giacomo Rafaelli e Studio, Rome, circa 1830. It is estimated to fetch £70,000 – 100,000 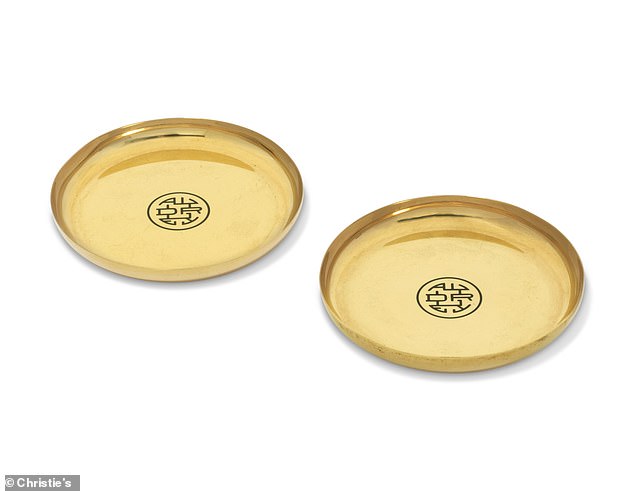 Among the treasures of transatlantic society hostess are a pair of Edward VIII gold ashtrays, by Cartier from 1936, estimated to fetch £2,000 – £3,000 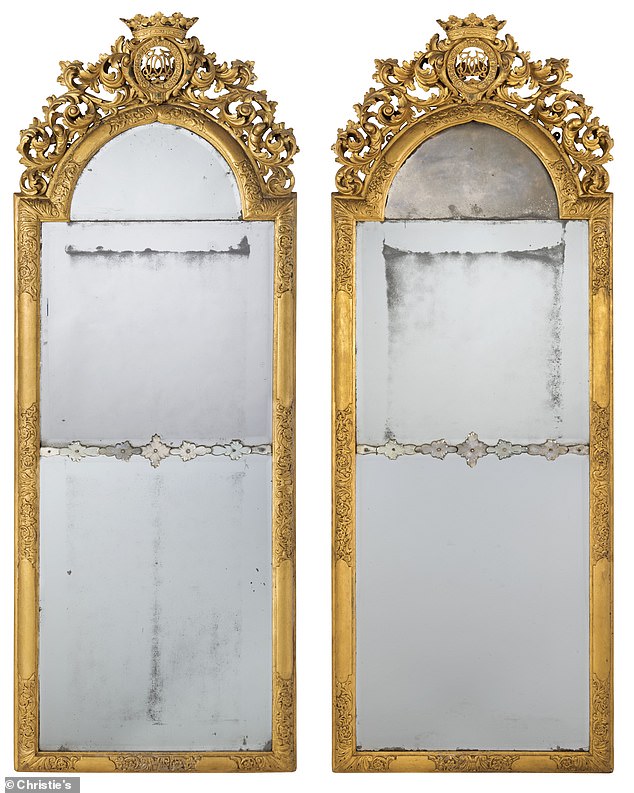 A pair of Queen Anne pier glasses, thought to have been made for the Duke of Queensberry, are estimated to fetch up to £120,000 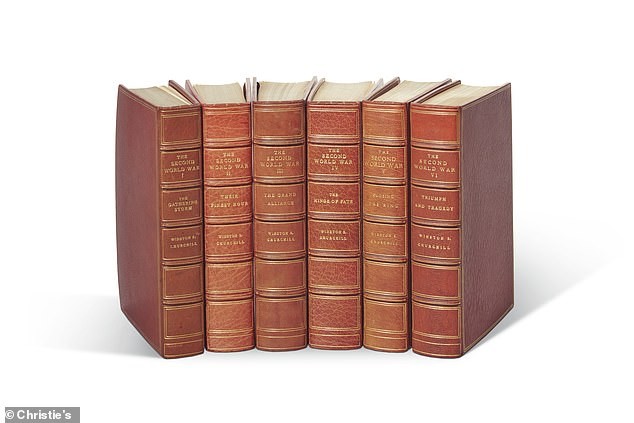 Winston Spencer-Churchill, The Second World War, 6 volumes which could earn up to £2,000. Winston and Clementine Churchill were good friends of the hostess

Other items include a pair of Edward VIII gold ashtrays, by Cartier estimated to be worth £2,000 – £3,000, a signed Horst print that could fetch as much as £4,000 and Winston Spencer-Churchill, The Second World War, 6 volumes which could earn up to £2,000.

Audrey grew up at West Dean in Sussex, officially the daughter of millionaire William Dodge James and Evelyn Elizabeth Forbes – although her real father was said to be Liberal politician Sir Edward Grey.

James was the son of a wealthy merchant while her mother was the eldest daughter of Moncreiffe and Sir Charles Forbes, 4th Baronet of Newe.

Audrey spent her childhood living in West Dean House on a 6,350 acre country estate and it wasn’t unusual for her and her four siblings to rub shoulders with members of high society, including royalty. 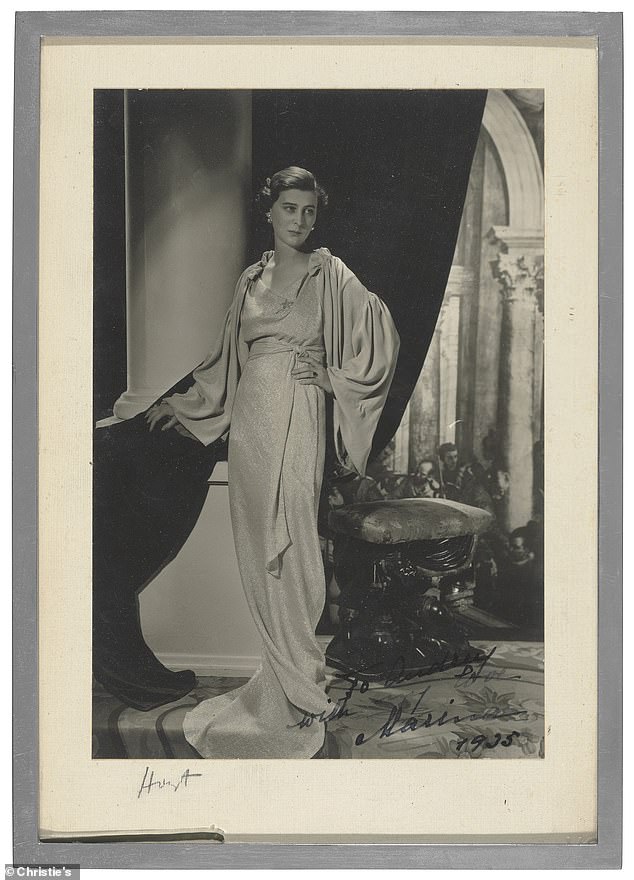 Up for sale is signed gelatin silver print by Horst of Princess Marina, Duchess of Kent estimated to make £2,000-4,000 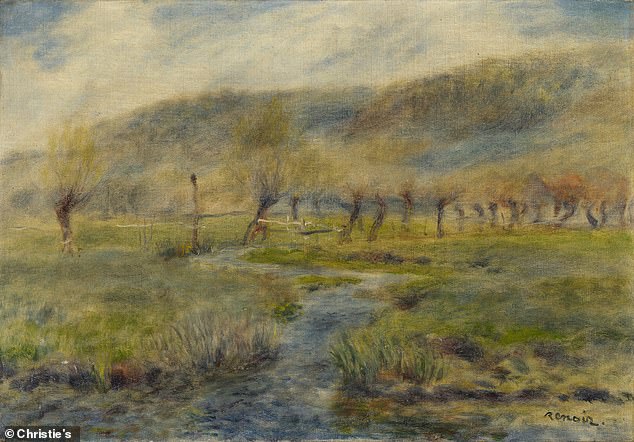 Pierre-Auguste Renoir’s La Prairie is up for sale and is expected to earn as much as £250,000. The hostess favoured Impressionist paintings of which she had an extensive collection

While her mother had a reputation as one of the great hostesses of the period, it was Bohemian Audrey’s own hedonistic antics which earned her a place among the Bright Young Things of 1920s London.

She attracted the attention of eligible bachelors such as Lord Mountbatten and Edward VIII, the Prince of Wales – but at the age of 20, Audrey married war hero Muir Dudley Coats.

He was the son of a British politician, and Audrey gave birth to son Peter in 1923 – who tragically died four days after birth.

Five years after marrying Coats, Audrey was widowed, and soon wed wealthy American department-store heir Marshall Field III – with whom she began to entertain upper echelons of society including politicians, artists and actors.

It was during her marriage to Coats that the new-found hostess met Cecil Beaton – who would later mention her Bohemian antics in The Book of Beauty, which inspired a number of writers, including Nancy Mitford.

Audrey bought and refurbished several homes throughout her life, often offering them to friends such as Mitford and Winston Churchill to borrow. 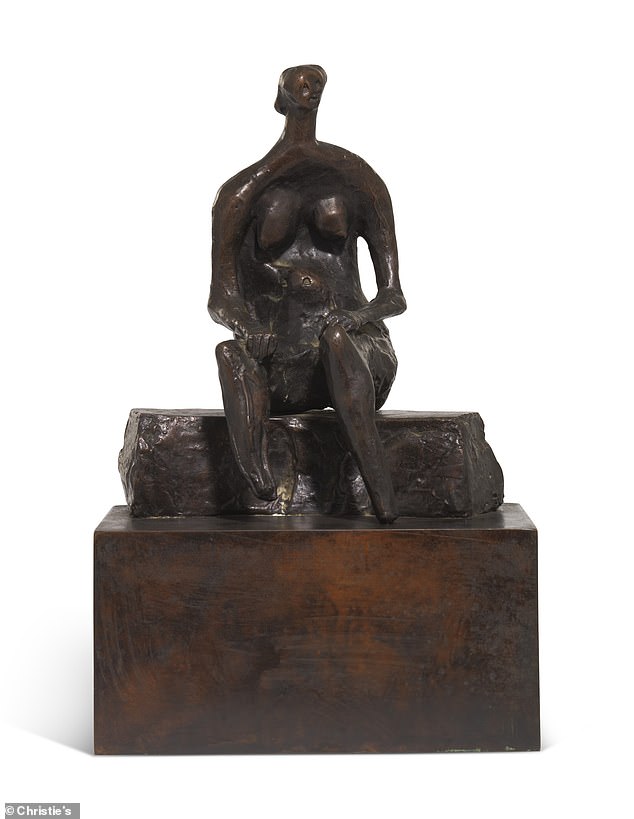 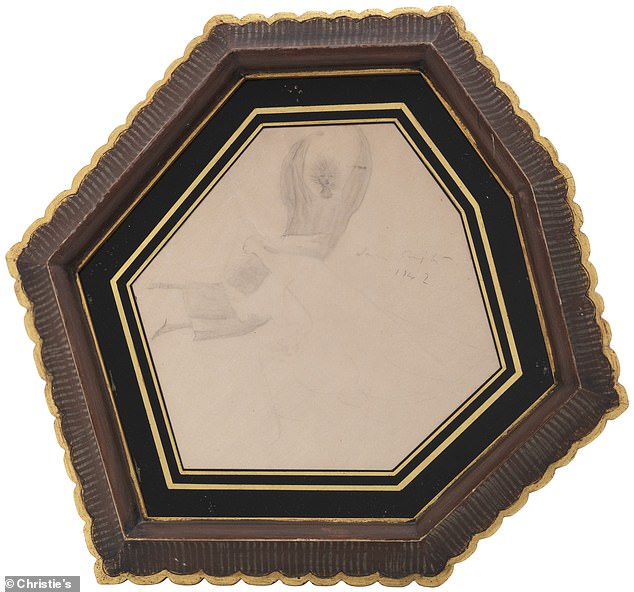 Leonora Carrington’s Surrealist painting Flying Figures expected to sell for up to £12,000. The socialite’s brother was a passionate supporter of the surrealist art movement and sponsored Salvador Dalí for the whole of 1938

In 1934, she and Field were divorced after an unhappy marriage and Audrey became the star of the London art scene. She entertained the likes of Elizabeth Bowes-Lyon, the wife of George VI and later the Queen Mother, at her Regent’s Park home.

The hostess favoured Impressionist paintings of which she had an extensive collection, while her brother was a passionate supporter of the surrealist art movement and sponsored Salvador Dalí for the whole of 1938.

Her brother had introduced her to the French avant-garde and she would often be found holidaying at the home of Coco Chanel on the French Riviera.

In 1938, she married Peter Pleydell-Bouverie, youngest son of the Earl of Radnor and when war broke out in 1939 remained in London working for the Red Cross and turned her home into a hostel for volunteers. 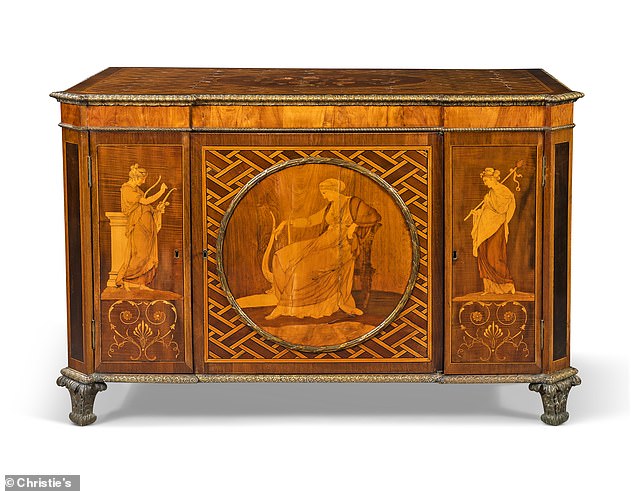 A George III Ormolu-mounted, mahogany, amaranth , harewood, marquetry and and parquetry breakfront cabinet circa 1775 expected to earn as much as £100,000 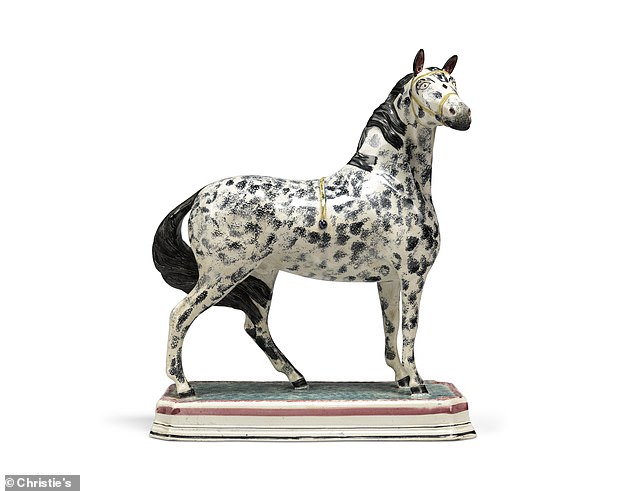 While in London she resided at The Holme, Regent’s Park, where Stéphane Boudin of Maison Jansen created ‘Vogue Regency’ interiors in a delicate palette of white, cream, gold, grey and pink, were specially designed to harmonise with her Impressionist art collection.

Two-years after marrying, Audrey moved to manor house Julians Park in Hertfordshire. The Jacobean home was remodelled by Boudin and her collection moved to Julians Park.

She loaned a number of her works to the Tate Gallery in her lifetime and before her death in 1968 left one of her best-loved paintings Azaleas and Pansies by Henri Fantin-Latour to the Queen Mother. It now sits in the Royal Collection.