Why men now have affairs for love while WOMEN do it for sex: Tracey Cox reveals how our reasons for cheating have completely reversed (and 10 reasons why YOUR partner’s infidelity had nothing to do with you!)

The gender orgasm gap remains – but the infidelity gap has all but closed.

Yet more research suggests women are cheating at least the same rates as men. Depending on the age group and behaviour, some women cheat even more often than men do.

And that’s not all.

The reasons why men and women cheat has done a complete about face: the ‘men cheat for sex and women for love’ expectation has reversed. 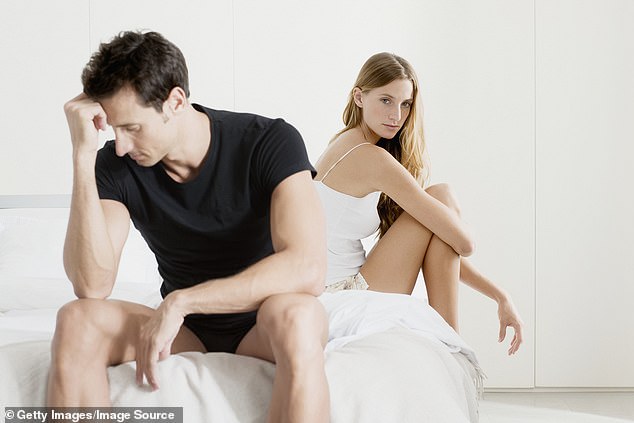 Tracey Cox reveals that the tables have turned and that men are increasingly having affairs because they crave intimacy and affection, while women want selfish sex without complications (stock image)

Why we cheated 20 years ago

Shirley Glass, a highly respected expert on fidelity in the early 2000s, found many men who loved their partners and had great sex at home, still never turned down an oppor­tunity to have a bit on the side.

Men cheated to satisfy sexual urges. They were opportunistic and – because it didn’t involve feelings or love –said affairs didn’t affect their primary relationship.

More than half the men Glass sampled who’d had affairs said their marriages were happy. Lots said they loved their partner, their sex life was great and they had no intention of ending their primary relationship.

Women in long-term marriages having affairs said quite the opposite.

Glass reported they had the lowest marital satisfaction of all and felt undesired, unheard and unhappy.

A continuing affair for a married woman nearly always meant she wasn’t having her emotional needs met – and hadn’t been for some time.

Her affair nearly always meant the marriage was at risk because she had strong feelings for the person she was sleeping with.

Fast forward to 2020 and the opposite is happening.

Women are having affairs for sex, men for love.

Men have affairs for love

Dr Tammy Nelson, author of ‘When You’re the One Who Cheats’, thinks men are more likely now to cheat for companionship and intimacy than sex.

1. Serial adulterers can’t do intimacy. It doesn’t matter who they end up with, they will always cheat because the alternative is to get too close to someone. This must be avoided at all costs because they might get hurt.

2. They’ve got other issues. Affairs are a great way to distract yourself from painful feelings you’ve never resolved.

3. They want to feel young again. They want to recapture parts of themselves that have been lost as well as check they’ve still ‘got it’.

5. They’re mourning missed opportunities. What if they’d chosen another path? Having an affair now could be them playing out the past.

6. They don’t like who they’ve become. Far easier to reinvent yourself with someone who doesn’t know the old you.

7. They want freedom. If you’ve been happily married for years but got together young, the affair could be their chance to explore the freedom they missed out on in their youth.

8. It’s in their genes. A Swedish study of 552 men suggested infidelity could be partly genetic: it’s in our DNA.

10. It’s a massive ego boost. Affairs are all about pin-point focus: you become the only two people in the world. Reality recedes and it’s as flattering as hell.

Today’s affairs for men happen when love and affection are lacking.

Wives aren’t at home baking cookies anymore, waiting for their man to come home. We’re busy, pursuing our own careers, sometimes out earning our husbands, less inclined to be 24/7 emotionally available.

‘I am the least important person in my wife’s life. My mistress makes me feel like I am the only person in the world who matters,’ one man, who’s been having an affair for two years, told me.

‘The sex is good but that’s not the motivation. It’s the attention.’

Mistresses idolise – they see the reflection in the pond. A wife sees the true him – under a microscope.

Not too many wives idealise their husbands, but most men love to be hero-worshipped.

Don’t get me wrong: some men still have sex-based affairs – but it’s usually when sex is being withheld from them, rather than the old-school lure of ‘fresh flesh’.

We’re tired of looking after our men and want selfish sex without complications.

Many women are serial cheaters, according to Wednesday Martin, the author of Untrue, a book that overturns the stereotype that says men are more sexual than women.

We marry the boring guy because he’s stable and reliable and would make a great Dad and have steamy sex on the side with the hot, bad ones.

That way we get the security, stability and companionship of long-term love but the excitement of sex on the side.

‘I can’t see how it’s damaging my marriage at all,’ said one 35-year-old woman who has been having sex with a work colleague for 18-months.

‘We’re friends but I have absolutely no desire to leave my husband for the man I’m sleeping with. In bed, he’s fantastic. Out of it, he’d bore me to death.

‘In bed, my husband bores me. Out of it, he’s my soul mate. I love him, just don’t lust after him. So long as no-one finds out and gets hurts, it’s a win-win.’

Female desire is very different than we thought

There are three myths about women and sex that the majority of people think are true.

The first is that men have a higher sex drive than women.

The second is that monogamy is harder for men than it is women, and the third is that men get bored with routine sex quicker than women do.

All of these statements are false.

Recent research suggests female desire is completely different to what we once thought. It doesn’t like tame, it likes risk. It doesn’t want romance, it wants lust.

Women aren’t having affairs for attention and cuddles. We’re having them for hot, adventurous, boundary-pushing sex.

‘Way more women are cheating than we think,’ says Alicia Walker, a professor of sociology and author of ‘The Secret Life of the Cheating Wife’.

Tracey’s new book, Great Sex Starts at 50, is available where all good books are sold. Check out traceycox.com for her products ranges and blog.