The top 10 places for buy-to-let have been revealed, with Rochdale, Greater Manchester topping the list with an impressive average return of nine per cent.

The list of best performing areas, according to research by property website Zoopla, only consists of towns in the North and Scotland.

It comes ahead of the third anniversary of the stamp duty changes, which saw a three per cent surcharge introduced on second homes and buy-to-properties. 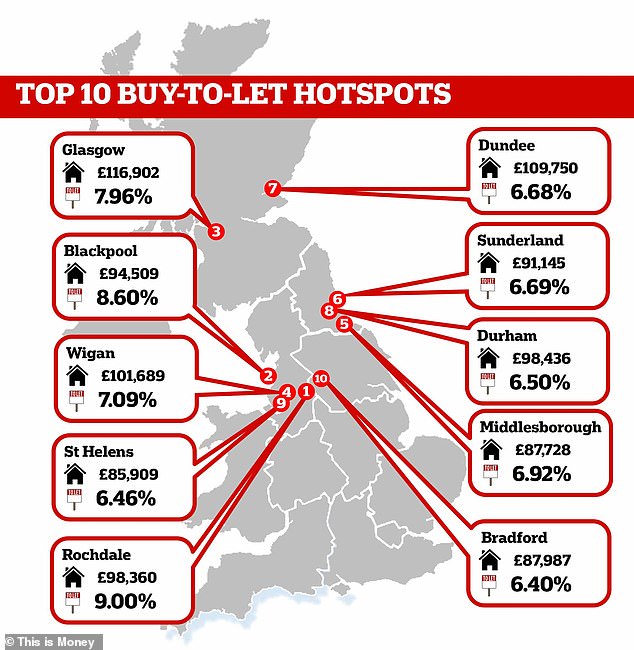 The research looked at the average rental yields of two-bedroom properties in towns with a minimum of 50,000 households.

It produced gross yields before tax, which were calculated with a basic calculation of multiplying the monthly rent by 12 and dividing this by the price of the property.

It was then multiplied by 100 to get a percentage.

However, this is only the yield if you’re buying the property outright and a more comprehensive calculation would take into account any mortgage on a property.

HOW THIS IS MONEY CAN HELP

The top town of Rochdale with a rental yield of nine per cent is based on an average asking price of £98,360 and an average monthly rent of £738.

House prices in the North tend to be cheaper than in the South, and it is these lower house prices that can produce a higher rental yield for landlords.

By contrast, towns in the South – specifically those in London’s commuter belt – are some of the worst-performing places to do buy-to-let.

Values in the South East tend to be higher, helping reduce the rental yields landlords can achieve.

St Albans, Hertfordshire is at the bottom of the table with an annual yield of 3.65 per cent, based on an average rent of £1,209 a month.

The best-performing areas were also identified in London, with Barking and Dagenham topping the list at 5.34 per cent.

At the opposite end, Hackney, East London has the lowest average yield of 3.32 per cent.

Annabel Dixon, of Zoopla, said: ‘This research shows landlords and potential landlords where there are still opportunities in the buy-to-let market.

‘Despite the challenges facing the sector, yields – particularly in North England and Scotland – match up well against other forms of investment.

‘It’s no surprise that towns further south provide lower yields. House prices growth has slowed, but property is still considerably more expensive in these locations, meaning that even with higher rents, the returns are more limited for landlords.’

The three per cent stamp duty surcharge was introduced three years ago on 1 April 2016 and applies to second homes and buy-to-let properties bought in England, Wales and Northern Ireland.