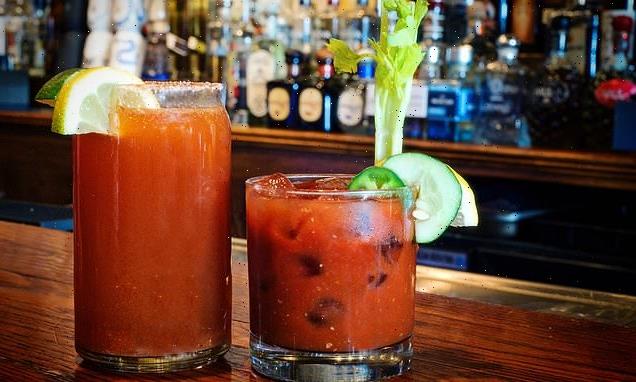 TOM UTLEY: Happy 100th birthday to the Bloody Mary – the only hangover cure I’ve found in my 68 years that works!

We can’t allow 2021 to pass without raising a glass to one of the great Frenchmen of the 20th century. A votre sante Fernand Petiot! Though you went to the eternal cocktail bar in the sky some 45 years ago, your contribution to civilisation here on Earth will live for ever.

Never heard of him? I have to admit that nor had I, until I read this week that Fernand ‘Pete’ Petiot was the genius mixologist at Harry’s New York Bar in Paris who is credited with having invented the Bloody Mary, exactly a century ago this year.

Indeed, last night in the French capital, some of the world’s most celebrated maestros of the cocktail shaker were descending on Harry’s Bar to pay homage to this greatest of the great.

I should make it clear from the outset that as a general rule, I’ve never been much of a one for cocktails. Give me an honest pint of bitter or a glass of red almost any day. Or if you’re pushed for ideas for my Christmas present, I don’t mind telling you that I do love the occasional treat of a single malt whisky, no water, no ice. 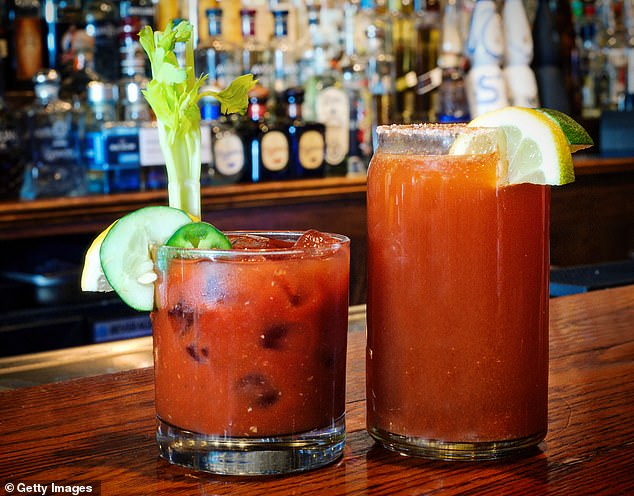 But a Bloody Mary? Now that’s something quite different. It’s the only cocktail I seriously enjoy — and the only hangover cure I’ve come across, in all my 68 years, that actually works. It’s every overindulging reveller’s friend, and never more so than at this time of year.

What’s more, we countless members of the Bloody Mary fan club are in pretty distinguished company. I think particularly of Ernest Hemingway, who was a regular at Harry’s Bar during his visits to Paris, along with such luminaries as Ava Gardner, Douglas Fairbanks Junior, Salvador Dali and Marilyn Monroe’s second husband, the baseball player Joe DiMaggio.

Indeed, some claim that the great American novelist himself gave the cocktail its name, in a barbed reference to his fourth and last wife, Mary Welsh Hemingway, who objected to his heavy drinking.

As for me, and I suspect for many others, I thought for many years that it was simply named after Mary Tudor, the Catholic daughter of Henry VIII and Catherine of Aragon, who earned the nickname Bloody Mary by ordering the torture and burning of Protestant martyrs.

But I now learn that this was not the explanation given by Petiot. Apparently, he testified to an American journalist that the first two customers for whom he made the drink were from Chicago, where there was a bar called the Bucket of Blood, which employed a waitress whom everybody called Bloody Mary.

‘One of the boys said the drink reminds him of Bloody Mary,’ he said. ‘And the name stuck.’

What is certainly true is that Hemingway claimed personal responsibility for introducing the drink to Hong Kong during his visit in 1941. After the war, he wrote: I believe it ‘did more than any other single factor, except perhaps the Japanese army, to precipitate the fall of that Crown Colony.’

Presumably, he meant that everyone in the British garrison was too sozzled to resist the Empire of the Sun.

Mind you, he may have had a good point if the bar staff looking after our troops in Hong Kong followed Petiot’s original recipe, as it appeared in the 1921 edition of Harry’s ABC Of Mixing Cocktails. For this stipulates equal measures of vodka and tomato juice — a trifle heavy on the spirits, even for an old soak like me.

In my book, we should aim for no more than one part vodka to two parts tomato juice — and even that’s pushing the alcohol content a bit. Otherwise, I reckon the great man’s recipe can hardly be improved upon, 100 years since he formulated it:

Juice of half a lemon

The only essential ingredient missing, if you ask me, is a dash or two of Tabasco — though if I had to pick nits, I’d say that my perfect recipe would specify celery salt, rather than the common-or-garden variety we sprinkle on our chips.

I would also spell out the need for lots of ice and a stick of fresh celery in the glass, to add that final touch.

Yes, I know, many will have other ideas about how to make the perfect Bloody Mary. Some swear by adding distilled vinegar or horseradish, or a dash of dry sherry to the mix, while others suggest garnishes of gherkins or even bacon (which sounds to me like last thing anyone would wish to tackle on Boxing Day morning, while nursing a murderous hangover). But chacun a son gout, as Petiot might have said.

Though tastes may differ, however, on one point we must surely agree that Hemingway had it plumb right. I’m thinking of his advice to his friend Bernard Peyton that ideally one should mix a whole jugful of Bloody Marys, because ‘any smaller amount is useless’.

Speaking for myself, I find it’s only after the second glass that I begin to feel halfway human after overindulging the night before.

He was right again, I reckon, when he added: ‘For combating a really terrific hangover, increase the amount of Worcestershire sauce — but don’t lose the lovely colour.’

I note, by the way, that the official reason Petiot gave for inventing the Bloody Mary was simply that he wanted to jazz up the bland taste of vodka, which had been introduced to Paris by Russian emigres fleeing from the Revolution.

But I wonder if he also suffered the occasional hangover himself, and recognised his brainchild’s potential as a cure.

I ask because his other claim to fame was that on June 15, 1925, he apparently set a record at a drinking contest in Paris by downing a two-litre glass of beer in 46.5 seconds flat. Don’t try this at home. I suspect it is not as easy as it sounds.

Whatever the truth, the Bloody Mary is much more than a mere hangover cure. For what sets it apart from any other spirit-based drink, I find, is that one can drink it in the morning without feeling guilty.

Indeed, I almost feel virtuous as I reflect that I’m getting at least one of my five-aday fruit and veg from the tomato juice — and another from the stick of celery that goes so beautifully with it. It’s a great deal healthier, anyway, than my usual breakfast of three cups of coffee and five cigarettes.

But as for every other cocktail ever invented — or at least those involving more than two ingredients — I’d cheerfully ban the lot.

Indeed, the one and only upside of Chris Whitty’s latest bout of scaremongering is that it seems to be keeping Christmas drinkers away from my local, with their maddening demands for Aperol Spritzes, Mojitos, Mai Tais and Pisco Sours.

If you have to order a cocktail in a British pub, I say, make it a Bloody Mary every time