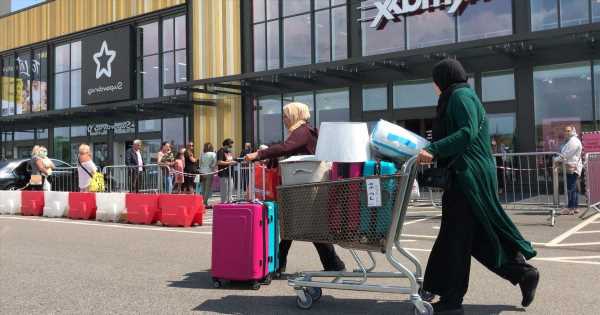 TK Maxx can be a treasure trove of designer goods for those willing to brave the shelves to find them.

Brits have bagged bargains from high end name brands and even shoes from top designers like Chloe.

But, there’s also plenty of clothes, shoes and skincare that leave you wondering whether you actually got a deal because you’ve never heard of them before.

Well, a former TK Maxx worker has recently opened up about the “secrets” staff know while working in the store on a new Channel 5 documentary which will show this weekend.

One of the major revelations was the use of “cheat codes” on tags.

Former senior merchandiser Daniel Baker, spoke up about the special numbers you might find on the labels.

He claimed that single digit numbers on tags and labels indicated whether you’re truly getting a bargain.

Daniel said: “The number that is really exciting to a customer is number two.”

If you spot the number “two” on a label then this indicates the item is “genuine excess stock” that was once sold at a much higher price elsewhere.

That means you’re getting a great deal.

Daniel added: ““The main three codes are one, two and seven. One means produced for TK Maxx.

“Two is ‘close-out buy’ — that is unsold from another brand.

“And seven is ‘packaway’, which means it’s been packed for a previous year, like Christmas crackers bought in January for the following December.”

So, now you know how to ensure you’re buying a genuine bargain item.

Plus, the merchandiser also revealed that the best stock is often at the back of the shop as it’s placed tactically.

Daniel noted: “A lot of the things people really want they put at the back of the store.”

This is because it makes the customer have to walk past racks of other items before reaching their goal.

And, that means they’re likely to spend more cash.

For more lifestyle stories, sign up to the free Hot Topics newsletter here.