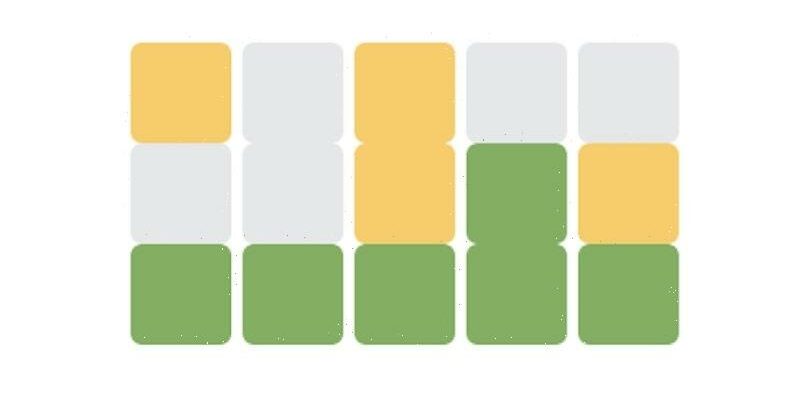 Boxing Day has nothing to do with Muhammad Ali or removalist vans. Or not this year. Even the tradition of Elizabethan gentry packing alms for the poor has been eclipsed in 2021 by a new box in town.

Wordle is a word-guessing game entailing 30 empty squares stacked into one big box, six rows of five squares, each row a virtual life in your bid to unveil the day’s mystery word.

For those late to the party, think hangman meets Mastermind, that 1970s parlour game where players waged war on a cribbage-like board. Using colours instead of letters, Mastermind relied on pegs to indicate how closely your opponent’s stabs matched the colour sequence you were hiding. 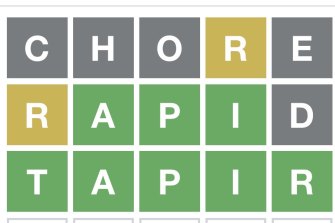 Wordle does likewise – but online and in vogue. Catchier still, the free software dishes up a new term every 24 hours, meaning every player around the world is seeking to unveil the same mystery solution.

HEART was my first guess, playing my maiden Wordle after Boxing Day. The phone screen blinked. Two green squares tinted my guess, telling me I had two correct letters in the right position: E and R. As for HAT, the remnant letters of HEART, they triggered grey squares, denoting their absence from the eventual answer.

What would your next guess be? WEIRD maybe. Would NEURO be kosher? NEHRU is surely a no-no. So runs the daily litany among countless Wordlers, innocent people hooked by this cute fetish.

Tips from an expert

Josh Wardle, a Reddit engineer, launched the gimmick in October. The premise was simple: six potential guesses to unmask one five-letter word. A green square says right letter in the right place. Gold means a right letter in the wrong place, while grey tells you what letters to ignore.

A century ago, the equivalent was Bulls and Cows. Jane Austen probably dabbled in the game, for want of Netflix or Candy Crush. Let’s imagine Jane’s mystery word was GHOST, while my gambit was STOCK. Weird as it sounds, Jane might reply, “Two cows, one bull.” This translates as two correct letters in the wrong spots (S and T here), while my bullseye O would qualify as a bull – right letter, right spot.

Wordle is a picnic in comparison, confirming which specific letters are correctly parked, or at least relevant to the solution. With HEART, I knew my HAT was redundant. So, I plumped for MERRY as guess Number 2, which was controversial.

Why? Because repeated letters were presumed by many to be forbidden, but maybe that’s the tormentor in me. As a crossword cluer, I brutalise citizens for a quid. Besides, MERRY seemed seasonal. Christmassy. True, but it was also wrong. Four green squares, however, said I was close, barring the grey initial of M.

Before revealing the answer, there’s a deeper question to plumb. Namely, the why behind the fad. What sees a souped-up lovechild of Jane Austen’s dalliance earn its place as the last whim of 2021?

The solution – like the Wordle grid itself – is multilayered. First, the game is free, awaiting your visit at powerlanguage.co.uk. Second, the rules are clear – the stink of #repeatgate aside – and the mental pursuit is pure. Zero timer preserves that vibe. Who needs more pressure in what’s been a stressful year? Take a spell. Engage in a brave new Wordle that doesn’t bite back.

A century ago, the equivalent was Bulls and Cows. Jane Austen probably dabbled in the game, for want of Netflix or Candy Crush.

Or quoting Angela Mary Claire, one keen Wordler who hushed the humbug chorus, “If the game gives people four minutes to disassociate each morning, and a flicker of connection with other people on Twitter, then I reckon that’s something worth shutting up about.”

As that’s the other Wordle asset. Back in October, the uptake was modest. A devoted band of nerds juggled the alphabet in relative peace. Until Wardle added a Share button, allowing users to display their colour-coded success without revealing what letters were picked to achieve that pattern. A non-spoiler teaser to highlight the game’s intrigue, on top of its in-crowd status.

Spelling BERRY as my third guess, I was expecting a bank of solid green. An emerald border to underline my humblebrag flag, but I was wrong. Again. See? It’s catchy.

Drip-feeding is the other smart move. HBO learnt that lesson with its time-locked Succession episodes, obliging the world to ride the Roy rollercoaster in sync. As with appointment TV, the Wordle wave is being surfed by thousands, in real-time, every player aboard the same damn FERRY (the answer).

Lastly, there’s the unvarnished fun of an old-fashioned game, a toy to dim the pandemic foreground. Give it time, like fidget-spinners or can-do capitalism, wordle will dwindle the way of every other meme. Or not, as one clairvoyant tweeted: “2022: you must show your daily Wordle solution for entry into shops and restaurants.” QR code – you’ve been warned.