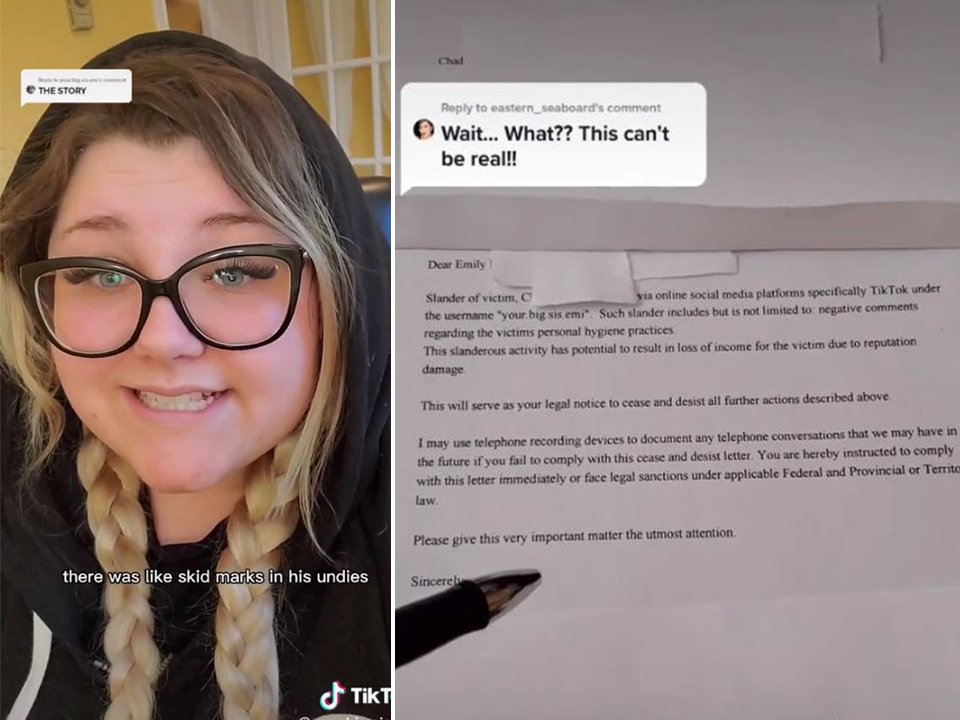 A woman has shared her ‘worst date’ story, and it’s safe to say she can beat even the cringiest ones of ours.

Emily Mackinnon, who posts as @authentically_emi, created a series of videos talking about her nightmare date, who had the perfect combination of bad hygiene and anger issues.

In one of her opening TikToks, Emily said: ‘So we matched on Tinder. He was a law student at the time. We went back to his place. It was implied that we were gonna hook up, but I never explicitly stated that.’

She explains that her date, who she calls Chad, took her to his home and they began kissing and undressing.

When he took off his underwear, though, everything went downhill quickly.

‘When I tell you it was a sight. It was a f***ing sight,’ Emily says on her podcast.

‘There was trails. There was a vague bad smell. I had to get the f*** out. Evacuate. Abort Mission.’

She continues in her video: ‘I was upwind and I still smelled something… There was, like, skid marks in his undies, and he had not washed in a long time.’

So, as you can imagine, and as is Emily’s right, she noped out of there, and forgot about the situation. That was until she was sent a letter accusing her of breaking a contract.’

She continued: ‘I left and a few days later, he had paid someone to serve me with papers to like sue me for breaking a verbal contract.

‘But it’s okay. I fixed it because he had spent a bunch of the time telling me about how his dad’s lawyer, so I made an appointment with his dad and just like told on him to his dad.’

Fast forward to now, and Chad is apparently a lawyer at his dad’s firm, but still hasn’t got over that time.

When Emily spoke about the incident on her podcast, Chad popped up again to serve her with a cease and desist letter accusing her of slander for doing so.

Despite the fact all identifying information about Chad is hidden – and that the incidents are allegedly true – he believed this could cause his ‘reputation damage.’

Emily took the letter to a lawyer just to be safe, in the hope Chad’s repeated efforts to take legal action may finally end.

‘The lawyer I talked to pretty much laughed at this,’ she wrote. ‘It’s very not legit so I’m not concerned in the least that it’s going to go anywhere.

‘I called his law firm and this was apparently something he did “on his own time” and should have had the law firm logo on it.’

Quite an own goal for Chad, as his colleagues who likely had no idea he was the subject of Emily’s videos will now know who she’s talking about thanks to his (mistakenly) litigious stance.

Remember, folks; consent can be withdrawn at any time, good hygiene is courteous to others, and when you get called out on your rubbish – don’t try to sue.