Los Angeles — Southern California utilities had cut power to tens of thousands of customers by Thursday morning to reduce the risk of sparking new wildfires, as new blazes popped up regardless, forcing hundreds to evacuate their homes. The power cuts, and many thousands more possible in the coming days, were aimed at reducing the fire threat as the region found itself whipped by Santa Ana winds that can turn sparks into catastrophes.

Red flag warnings of extreme fire danger were in place Thursday throughout much of the region because of low humidity, bone-dry brush and the winds, which sweep down from the interior with sustained speeds up to 35 mph and gusts of 50 to 70 mph, the National Weather Service said. 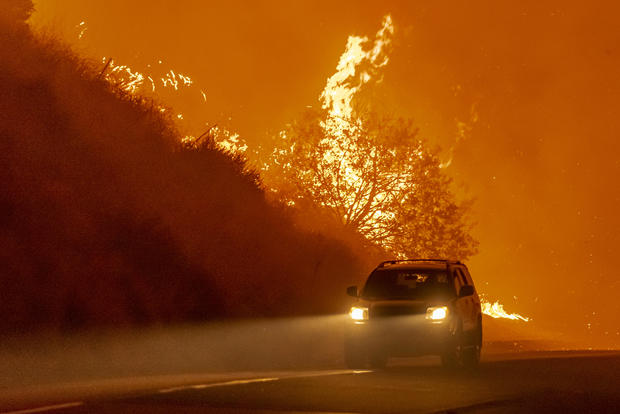 The warnings were set to remain in place into Saturday, with the winds at their greatest overnight and in early morning hours, the weather service said.

The Bond Fire, which was sparked by a house fire, broke out sometime before 11 p.m. in the 29400 block of Silverado Canyon Road. Early Thursday morning, there was still no containment of the blaze.

EVACUEES of #BondFire. You’re
strongly encouraged to seek safety with family/friends or in a hotel.
Due to COVID-19, no congregate shelter is offered. A temporary OC Red Cross evacuation point is at 8405 E. Chapman Ave, Orange. Info and restrooms available. pic.twitter.com/O6fiRmmYPX

Mandatory evacuations were issued overnight for Silverado Canyon, Williams Canyon and Modjeska Canyon, according to the Orange County Fire Authority, and CBS L.A. said at least 10 other communities were under evacuation advisories.

Utilities in the populous region began cutting power Wednesday to customers as a precaution to prevent gusts from blowing tree limbs into electrical equipment or knocking down power lines, which in recent years have sparked devastating wildfires.

Southern California Edison had cut power to almost 35,000 customers by early Thursday morning and was considering de-energizing lines serving a total of about 260,000 customers in seven counties throughout the windy period, which could last into Saturday. It was one of the utility’s largest precautionary blackouts.

San Diego Gas & Electric pulled the plug on about 24,000 customers by Wednesday night with another 73,000 in the crosshairs.

“We recognize losing power is disruptive, and we sincerely thank our customers for their patience and understanding,” the utility said.

A blaze on roughly 15 acres in in San Diego County threatened about 200 homes and officials were working to evacuate them, said Capt. Thomas Shoots with Cal Fire, California’s state firefighting agency. Nearby apartments were under evacuation advisories. The fire reported late Wednesday had damaged some homes, KGTV reported.

California already has experienced its worst-ever year for wildfires. More than 6,500 square miles have been scorched, a total larger than the combined area of Connecticut and Rhode Island. At least 31 people have been killed and 10,500 homes and other structures damaged or destroyed.

“Some years there’s some rain that tamps down the fire season. But not yet this year,” said meteorologist Adam Roser with the weather service in San Diego.

No rain is expected for Southern California for at least the next week and a half, he said.

Northern California, which has seen more precipitation this fall but not much recently, was expecting dry, windy weather starting this weekend.