With only a few days to go until Dec. 25, many are currently asking themselves that perennially popular question: Will there be a white Christmas in 2018? If you celebrate Christmas, there’s just something about a dusting — or deluge — of snow that can make the holiday that much cozier. But while we’ll of course have to wait until the day itself to find out whether it will really snow on Christmas, this White Christmas Calculator from Omni Calculator might help take some of the guesswork out of the whole thing. Using decades’ worth of climate data, it calculates the probability that there will be snow on the ground on Christmas day throughout North America. Neat, right?

Found in 2014 and based in Krakow, Poland, Omni Calculator is a small company that does one thing really well: They build calculators. Specifically, they build calculators meant to solve everyday math problems — the kinds of things people tend to encounter in their day-to-day lives. The idea, as the company puts it on their website, is to “[remove] barriers that prevent us from making more informed decisions” — that is, to “make getting from ‘I have no idea how many’ to ‘I need 42 of those’ easy, fast, and accessible.”

To that end, there are more than 680 calculators available on the Omni Calculator website that can calculate everything from an estimate of your gas usage and the costs you incur travelling by car to how much pizza you need to feed everyone coming to the party you’re throwing next Friday night.

The White Christmas Calculator was put together by Omni Calculator team members Filip Derma and Kacper Pawlik using 30 years’ worth of data from the National Oceanic and Atmospheric Administration (NOAA) — specifically, the climate normal from the years of 1981 up through 2010 — in the United States and, in Canada, data from Environment and Climate Change Canada (that’s the department of the Canadian government that oversees environmental policies and programs and works to preserve the natural environment and renewable resources). Using this data, the calculator predicts the probability that there will be snow on the ground on Dec. 25, 2018. The tool will also tell you the nearest cities to your own that have a 20 percent or greater chance of seeing snow on Christmas Day. To use it, all you have to do is select your city — or the city nearest to the town where you live — in the calculator’s drop-down menu, and voila: It spits out an easy-to-understand response.

Personally, I don’t need a calculator to tell me whether I’m going to experience a white Christmas this year; I’ll be in Southern California, so the odds of it snowing there in the next few days are, uh, slim. Indeed, if you set the calculator to Los Angeles, here’s what you see: 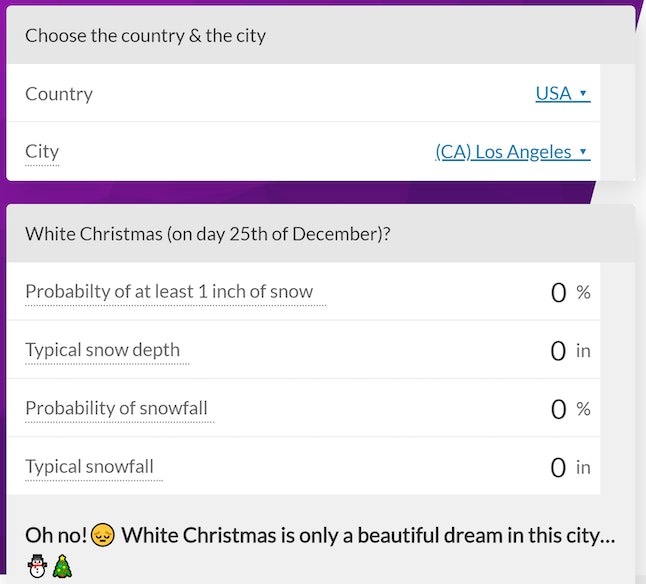 I’d also have to travel quite a ways away to get to the nearest place that might have a white Christmas; according to the calculator, the top five places closest to LA that will have at least a 20 percent chance of snow on Christmas are Reno, Nevada, which is 396 miles away; Provo and Salt Lake City, Utah, which are 572 and 589 miles away, respectively; and Boise City, Idaho, which is 687 miles away. Whomp, whomp.

I wouldn’t have much luck if I were staying where I currently live, either: 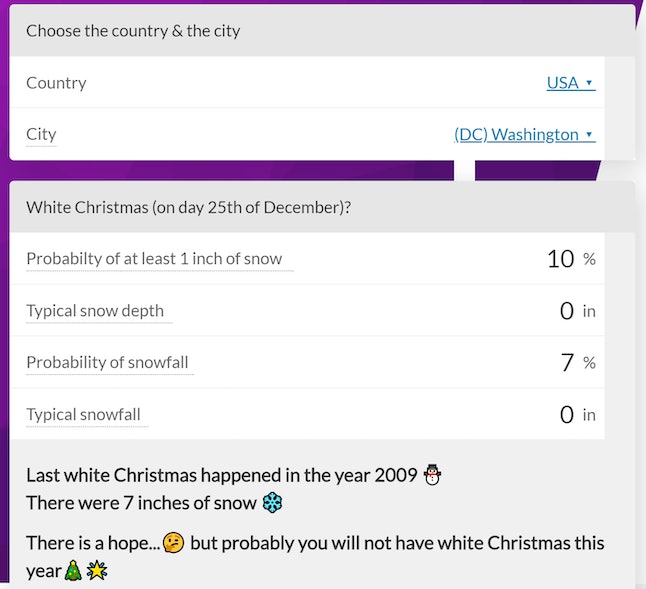 This is also not surprising. In DC, we get maybe one good snowstorm every year if we’re lucky — and even then, it usually doesn’t happen until January or February. Snowy Christmases? Not exactly the norm here. Apparently it’s been almost a decade since that happened.

If I still lived where I grew up, though? 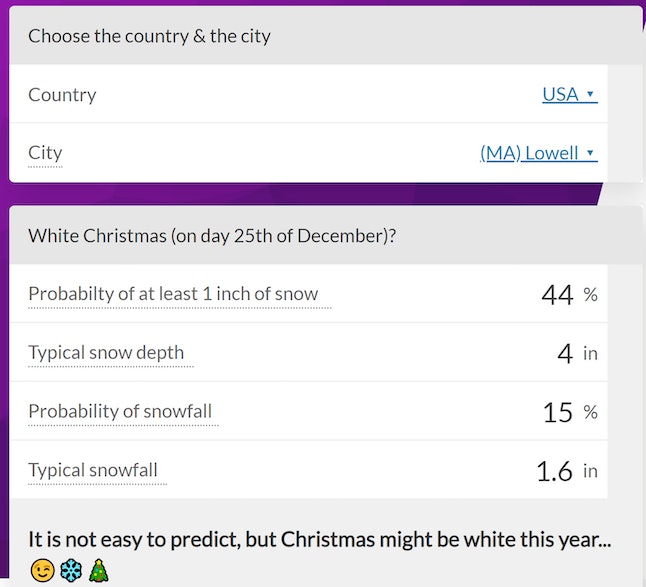 OK, so I didn’t actually grow up in Lowell — but there are only three cities in Massachusetts included in the calculator and Lowell is just barely the closest to my hometown, so let’s just roll with it. In any event, there’s a whopping 44 percent chance that this area of Massachusetts will see snow on Christmas this year. Do I kind of regret that I haven’t had a white Christmas since my childhood? Sure. Then again, though, I had plenty of white Christmases back then, so… I’m good.

The White Christmas Calculator has its limitations, of course; it’s only available in the United States and Canada, for one, and only for a few cities in each state or province within those two countries. Also, a prediction isn’t a guarantee — so even if the data suggests there’s a certain likelihood that you’ll experience a snowy Christmas wherever you are, it’s never a sure thing until it actually happens. The calculator is still fun to play with, though, even you live somewhere snow just… isn’t a thing.

Of course, the, uh, dark side of all of this is the fact that not too far in the future, white Christmases in certain regions might vanish all together. According to a report from the NOAA originally published in 2014 and updated in 2017, it’s become much less common since roughly 1960 to see snow on Christmas in areas like the Pacific Northwest, Montana, Nebraska, the lower Great Lakes, Alberta, and Saskatchewan in North America, which is a troubling trend indeed. Climate experts note that the trend is likely to continue, as well — and some have even begun asking the question of when the last white Christmas ever might occur.

Sorry to be a downer, but, well… it’s a real concern.

Anyway. Do what you can to stop climate change, enjoy your white Christmases while you have them, and find out whether one might be in the cards for you this year here.