Travis Scott is back at it again with the extravagant flowers for Kylie. Stomri’s mama posted a video of a new floral gift her rumored fiancé gifted her for Valentine’s Day, and the video of Travis Scott’s 2019 Valentine’s Day surprise for Kylie Jenner takes his flower gift game to the next level.

The couple, who just attended the Grammys together on Sunday, Feb. 10, just celebrated their daughter’s first birthday. The party was a play on Scott’s ASTROWORLD album and tour theme, in that it was a giant carnival that featured a giant inflatable Stormi Webster head, just like the ASTROWORLD cover art. First came the birthday party, then came the Grammys, and now, here we are with a big romantic gesture from Scott. It’s been a bit of a week for the Jenner/Webster fam!

Jenner posted one video of the epic gift to her Instagram story on Feb. 12, then posted another one on Feb. 13. Both videos show off the gift in different lighting, one more ~steamy~ than the other.

The gift itself is set up in what appears to be the entryway of Jenner’s California home. It’s a long, red, reflective runway that has multiple sets of hearts made of red roses going down the aisle. Yup! I said aisle!

Could this be a hint they’re getting married?! You know, cause Jenner has to walk down an aisle to get to the neon heart at the end?

"No, Kelli. That’s we call a stretch," I hear you say. And you know, you may be right. But until Jenner tells me otherwise, I’m going to continue to theorize that she and Scott are engaged, OK?! OK.

Here’s a shot of the gift again, but in the daylight. 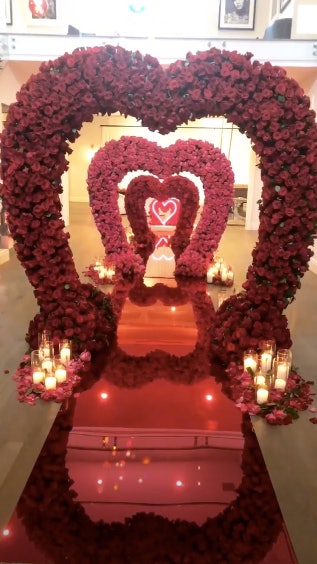 Candles and roses and hearts, oh my! Look, if I were Travis Scott and I had a history of gifting Jenner some epic bouquets of roses, you sure as hell bet I would go all the hell out and do an aisle-themed gift if were also secretly engaged. What else does he want us to think with this literal aisle Jenner is walking down?!

If you don’t believe the engagement rumors, allow me to convince you.

Scott said in a previous interview with Rolling Stone that he completely plans on proposing to Jenner, he just had to think of the best way to ask her. Lots of fans theorized that Scott was going to pop the question to her during the Super Bowl Halftime Show when he performed with Maroon 5, but that didn’t happen.

What did happen at the Super Bowl, however, was that Scott posted a picture of Jenner to his Instagram story, and she’s wearing a giant diamond ring in it.

Ladies and gentlemen of the jury, I present, Exhibit A. 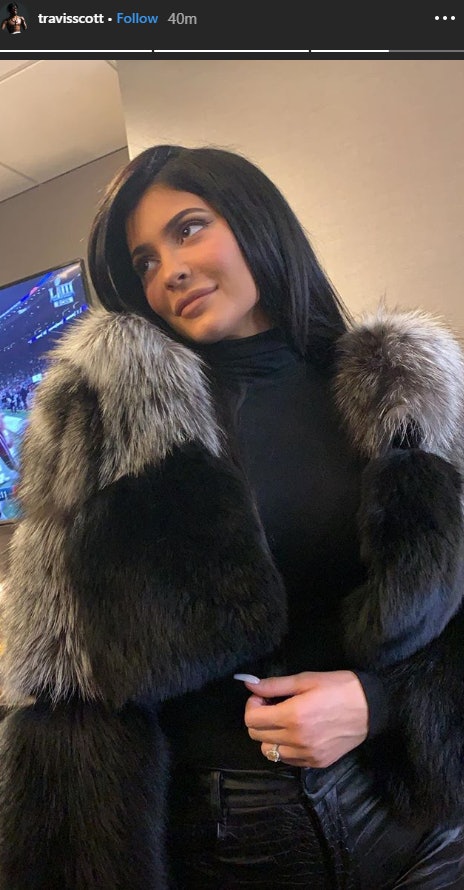 Look at that rock!!

She’s also wearing it in this picture she posted to Instagram on Feb. 3.

After posting that pic, she teased her followers about her and Scott being ready for baby No. 2.

She posted the above photo of her and Scott cuddling on the same staircase as the last photo and said, "baby #2?"