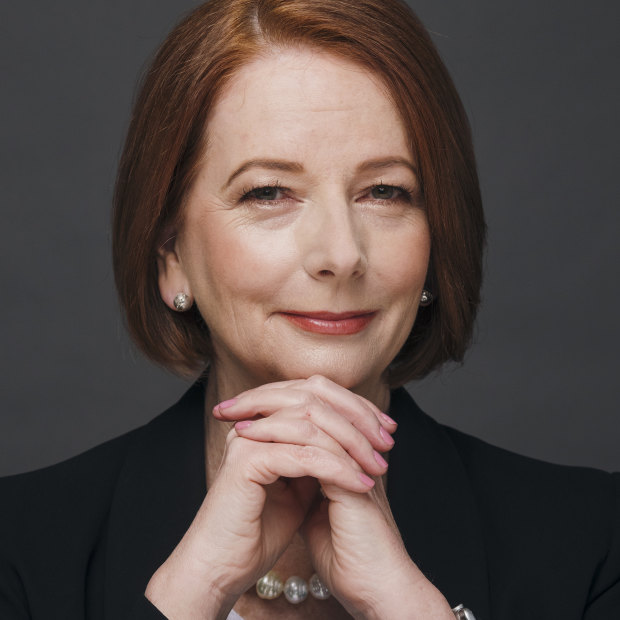 Julia Gillard has a mixed record when it comes to women.Credit:James Brickwood

Terese Edwards missed Julia Gillard’s famous misogyny speech. She was at Parliament House on October 9, 2012, but she was outside, on the parliament’s lawns, protesting against changes to the single-parenting payment passed into law that day by Gillard’s Labor government. 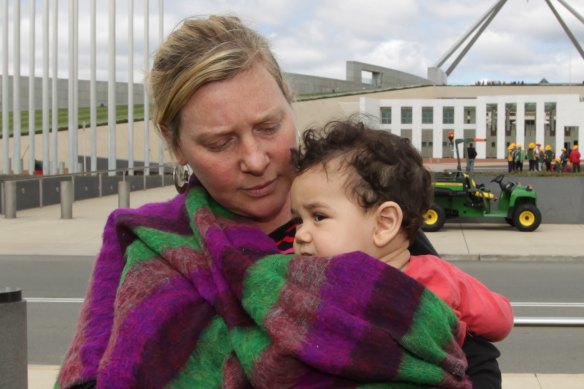 A single mother outside Parliament House in 2012 protesting against Labor’s cuts to the single parenting payment.Credit:Andrew Ellinghausen

Edwards, the chief executive of the National Council of Single Mothers and their Children, says those changes plunged tens of thousands of single mothers into poverty, and their effects are still being felt a decade later.

“I felt like there was this incredible party, but I never qualified for the tickets, so I missed out,” Edwards says of Gillard’s electrifying speech, calling out then-opposition leader Tony Abbott for misogyny.

“I wanted to clap and cheer and be part of that empowerment, but I couldn’t,” Edwards says.

“I was an inconvenient reality because I was saying: ‘This is not OK from our first female PM’.”

The Gillard government amendments, passed quietly into law that historic afternoon, pushed more than 80,000 single parents off the parenting payment and onto the lower Newstart payment, leaving some up to $110 a week worse off.

The decision ended the grandfathering arrangement put into place by prime minister John Howard in July 2006, when he stopped parents claiming the parenting payment when their youngest child turned eight. 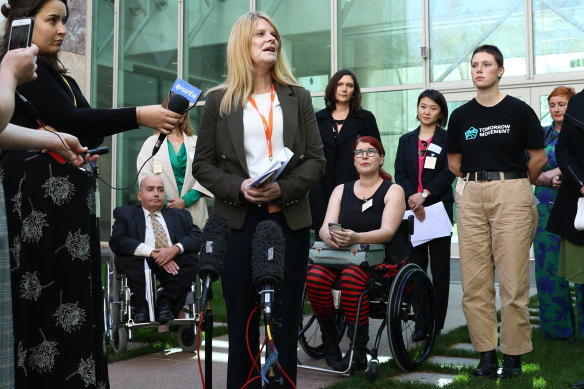 Terese Edwards (centre) was an inconvenient reminder that the Gillard agenda was hurting single parents.Credit:Dominic Lorrimer

Those who were already on the payment in July 2006 were allowed to keep it until their youngest turned 16, meaning subsequent siblings were also covered.

The Gillard government decision to end the Howard-era grandfathering arrangements was defended as a necessary budget cut.

It saved $728 million over four years, and a 2020 Parliamentary Budget Office analysis found the Howard and Gillard changes combined had saved taxpayers $5 billion.

Gillard also said it was a fairness measure – the grandfathering provisions meant some single-parent families received more than others in the same position.

“It was a policy adopted by the Howard government, basically because the evidence shows that it is in the interests of children to be in a household with a parent who works, so it was a welfare-to-work measure,” Gillard told the ABC’s Q&A program in 2020. “We didn’t do it from some impulse that was anti-single parents or children.”

But Peter Davidson, principal adviser with the Australian Council of Social Service, disputes the cut was a welfare-to-work measure.

Parents on the single parenting payment were already required to look for work, and to accept part-time employment if their youngest child was six years or over. 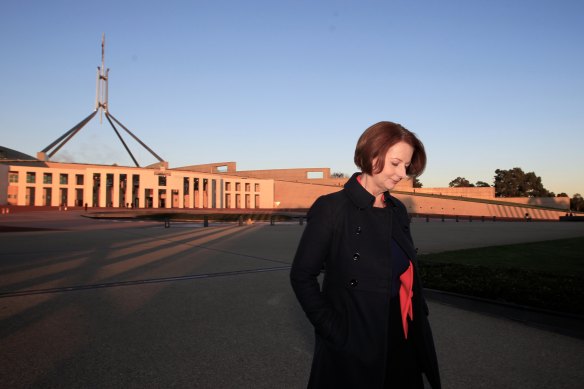 Julia Gillard continues to defend the changes to the parenting payment her government made.Credit:Andrew Meares

“It had absolutely nothing to do with assisting or requiring those parents to take up part-time employment,” he says.

“It was an appalling policy. It was a cost-saving at the expense of families and children in the deepest poverty.”

The Poverty in Australia report 2018, conducted by ACOSS and the University of NSW, charted the impact of the policy, with the data showing a “sharp rise in poverty among households with sole parents who were unemployed, from 35 per cent in 2013 to 59 per cent in 2015”.

Anthony Albanese, Bill Shorten and Jenny Macklin, who was the community services minister when the cuts were made, later disowned the policy and said it should never have been implemented.

In 2014, Macklin told a group of single mothers the change was “too hard, too blunt”. Shorten said in 2013 that “there are legitimate grievances that have emerged from the policy” and Albanese said single parents he spoke to felt the policy indicated a lack of respect. (The Albanese government has indicated no plans to reverse the cut.)

Gillard is alone in still defending it. She told Q&A that a “fair weighing” of all the measures her government took to support disadvantaged families, particularly when it came to education, would show “we made a real difference”.

In the 10 years since Gillard’s famous misogyny speech, there has been a national reckoning over the rank sexism and vile gender-based abuse she faced as Australia’s first female prime minister. Unlike other former prime ministers, Gillard has kept aloof from domestic politics, and has built an impressive international career promoting the rights of girls and women.

Was she so hamstrung by accusations she was “playing the woman card” that she failed to promote policies addressing gender inequity? (Gillard has recently said she made a “big error” not calling out earlier the sexism she faced.)

Emeritus Professor Marian Sawer, of the Australian National University, is a political scientist with an expertise in women’s policy. She points to a “few negatives” when assessing Gillard’s feminist legacy.

She mentions the single-parent policy, and also the fact that Gillard went to the 2010 election without a proper women’s policy.

“It was released the day before the election without telling anybody, and was not included in the policies on the ALP’s campaign website,” Sawer says. 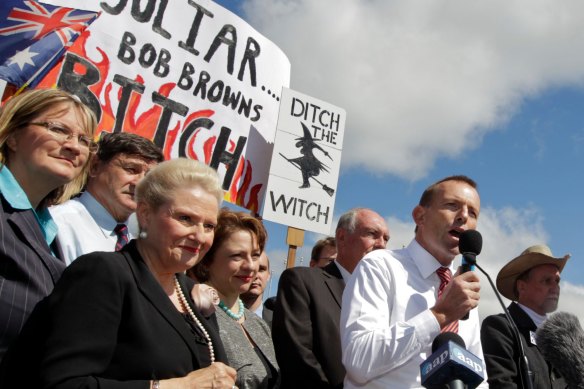 Julia Gillard concedes she made a mistake not calling out the sexism she faced while in power.Credit:Andrew Meares

She also notes Gillard’s decision to leave the Office for Women within the Department of Families, Housing, Community Services and Indigenous Affairs.

Howard had moved the Office for Women into that department because he thought it belonged with families.

Women’s policy experts objected to this, seeing it as a relegation — the office had usually been within the Department of Prime Minister and Cabinet, ensuring greater prominence within cabinet.

Gillard kept the Howard government arrangements, and while she had a minister for women in her government, only the last person to serve in that role, Julie Collins, was in cabinet.

On the other hand, says Sawer, Gillard “made big investments in the care economy”, which largely employs women.

Her government established the National Disability Insurance Scheme and allocated billions in funding to it. At least 80 per cent of community service workers are female.

“When the Australian Services Union brought a successful case under the new Fair Work Act, the Gillard government announced $2 billion in funding to help pay for the increases,” Sawer says. 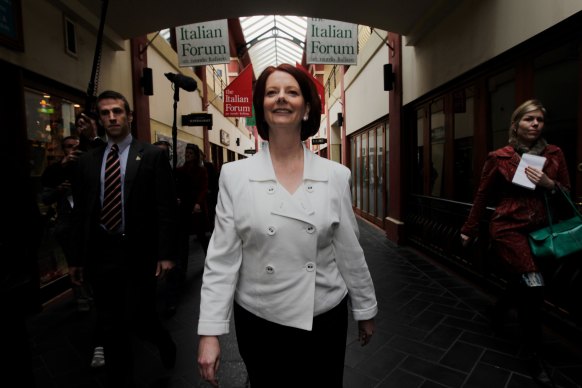 Julia Gillard on the hustings in 2010.Credit:Andrew Meares

One charge sometimes laid against Gillard is hypocrisy – this has to do with the unique and rather sordid context for her famous misogyny speech.

They included one in which Slipper referred to female genitalia as looking like mussels.

“Look at a bottle of mussel meat. Salty c–ts in brine,” read the text message from Speaker to staffer.

The texts were shocking – a window into an unprofessional, sexualised workplace culture in Parliament House, a culture that has come under intense scrutiny in recent years.

Since 1993, Slipper had been the LNP member for the Queensland seat of Fisher but in 2011, he was facing disendorsement in favour of rival Mal Brough, a former Howard government minister. The Gillard government, seeing an opportunity, lured Slipper to the Speaker’s job in November. Slipper left the LNP, and took the (highly paid) job. 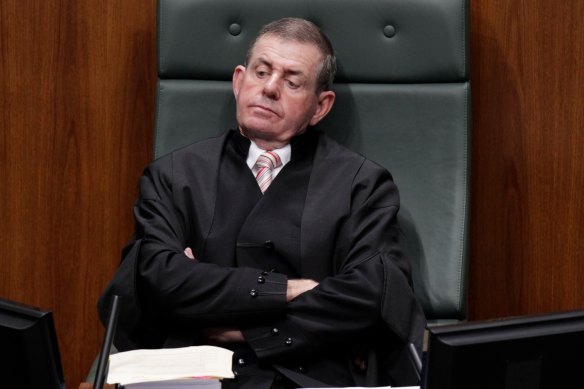 Peter Slipper came under fire for his off-colour remarks about women’s genitalia.Credit:Andrew Meares

This manoeuvre meant Gillard could return the outgoing Labor Speaker, Harry Jenkins, to the floor of the House of Representatives, and shore up her fragile minority government.

But a political scandal erupted in April 2012 when Ashby filed a lawsuit against Slipper, alleging the Speaker had sexually harassed him (those proceedings were eventually discontinued after a settlement was reached, and Ashby’s application to have his legal costs covered by the Commonwealth was rejected).

Slipper’s text messages were leaked to the media, and Gillard came under sustained pressure from opposition leader Tony Abbott, who said the texts were “obscenely offensive … what female Labor members would describe as sexist and misogynist if anyone else had uttered them”.

On the day of October 9, Gillard and Abbott traded insults across the Despatch Box, with the conflict building as question time wore on.

Among other things, Abbott said Gillard’s government should have “died of shame”, a horrible echo of broadcaster Alan Jones’ previously reported remark about Gillard’s recently deceased father having “died of shame” over his daughter.

“This is a government which is only too ready to detect sexism, to detect misogyny, no less, until they find it in one of their own supporters,” Abbott thundered at Gillard.

He then moved a motion of no confidence in the Speaker.

These accusations of sexism, from a man who had a decades-long public history of his own sexist comments, including those directed at her, were too much for Gillard. 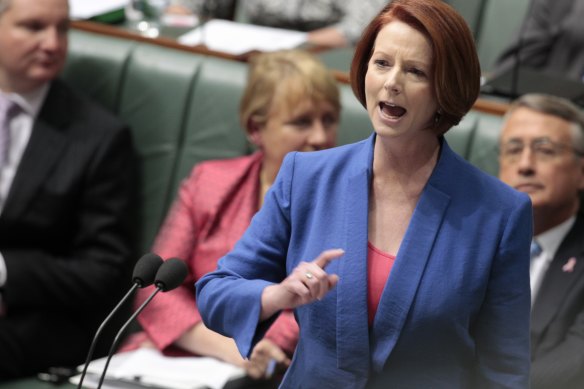 She let loose in her response opposing Abbott’s motion.

It was a political speech, but the motivation was also personal: she’d had enough.

The famous speech marked the first time a moment in Australian politics had gone truly “viral”.

Within a week, the YouTube video of the speech had 1 million views. It was reported around the world. In 2020, a Guardian readers’ poll named it the No.1 most unforgettable moment in Australian TV history. Gillard has said she was reconciled to the fact that it has probably over-shadowed her achievements in office.

“Even by the time I’d walked back to my office from the chamber … there were starting to be calls and a reaction beyond Canberra,” Gillard told News Corp last week.

“I think its power has been that there are millions of women – and I feel like I’ve met millions of them – who have lived through sexist experiences, misogynistic experiences. 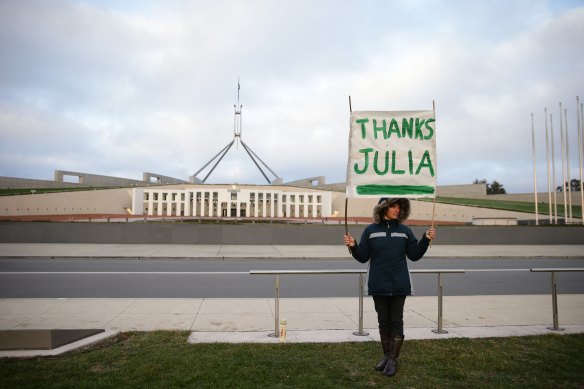 “And at 3am, they’re going, ‘Oh, I wish I’d said that, I should have given it back to him, I shouldn’t have taken it.’ And it’s a speech that helps capture the frustrations of those moments.”

(Abbott told The Sydney Morning Herald and The Age this week: “There’s no doubt that it was a considerable coup de théâtre, but let’s not forget that its purpose was to get her off a hook of her own making, namely defending her [pick for Speaker] against highly credible sexual harassment claims plus references to women by that same Speaker that should never have been defended.”)

Slipper resigned a few hours later, but by then the story had moved past its immediate context, and Gillard’s oratory had earned her a place in history.

For many women in Australia and across the world, it is an eloquent howl of female anger, exhilarating and cool in equal measure.

It has taken on new life on TikTok, with Zoomers miming the speech affectionately in videos, to the backing of remixed music.

This trend caught the eye of Gillard herself – she appeared in one mimed by young feminist activist Chanel Contos.

Gillard pops up right at the end, arms crossed, smiling, dressed in one her famous jackets – the jackets which were so heavily scrutinised in the sexist commentary she faced as prime minister.

Its colour is suffragette white.