Spoilers ahead for Outlander Season 4, Episode 6. While Outlander fans are anxiously waiting to see how Jamie’s relationship with Brianna will play out, "Blood of My Blood" gave Jamie another fatherly moment. Jamie and his son William reunite on Outlander when Lord John Grey comes to visit Fraser’s Ridge. As shown in the Season 3 episode, "Of Lost Things," William was born after Geneva Dunsany blackmailed Jamie into having sex with her. The true identity of Willie’s paternity has been kept a secret from the young boy, but after all these years, Jamie has the rare opportunity to bond with his son and it further highlights Jamie’s complicated status as a father.

Without any forewarning, Lord John Grey arrives at Jamie and Claire’s home in North Carolina in "Blood of My Blood" on his way to Virginia. He and his wife Isobel (Geneva’s sister) took custody of Willie after Geneva died during childbirth. Now, Isobel has died and Willie is mourning the loss of the only mother he ever knew and struggling to adjust to traveling in this foreign land. So, when John gets sick with the measles and William is forced to hang out with Jamie in the North Carolina wilderness, he’s not too pleased. However, William does have fond memories of Jamie from when he was a child, and Jamie’s mastery of the outdoors gives William enlightening new experiences. 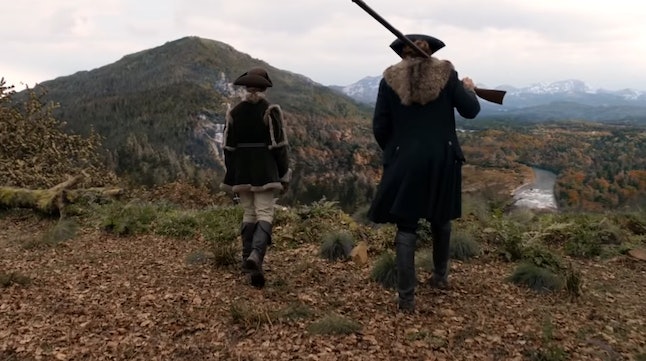 William still doesn’t know Jamie is really his biological father, but their little jaunt in the woods is still a significant father-son bonding moment. Jamie can’t help but express some fondness for the boy, but luckily, William doesn’t suspect the nature of their true connection. And Jamie gives William some valuable life lessons that the wealthy and pampered child would probably never learn from John Grey. But Jamie still has to hold back from showing how much he really does care for his son and how it hurts that Willie will never see him as the true father figure he is.

Besides when Jamie confesses his relationship to Willie to Murtagh (why would you admit that so close to the house?!), the closest that William gets to finding out the truth is when he steals a fish from the Cherokee. William crosses over the line that divides the British territory from the Native Americans’ land and some Cherokee men angrily approach them. To spare William from being hurt, Jamie correctly claims that the boy is his son. "His blood is my blood. Take mine instead," Jamie says. But William only recognizes that Jamie is trying to save him, not that his words are true. 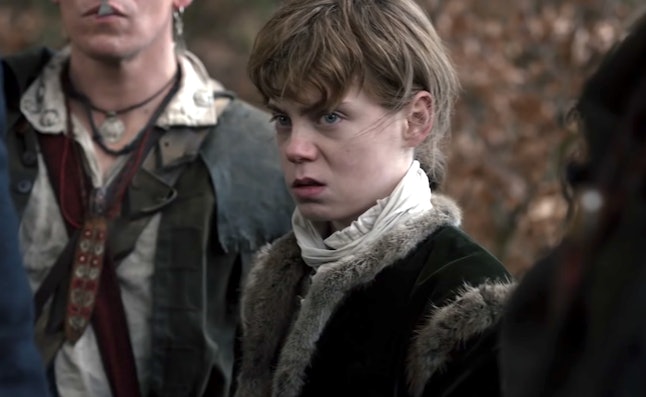 Still, this moment allows Jamie to be proud of the young man that his son is becoming. William tells the Cherokee that he’s solely responsible for stealing the fish. The Native Americans let Jamie and William go and Jamie claims it’s because of the courage Willie showed. Even though John Grey can’t teach William the rugged lessons of a Highlander, he is raising Jamie’s son to be a good and decent person.

Meanwhile, John and Claire are dealing with their own loaded dynamic, since John still has romantic feelings for Jamie. But Claire puts her emotions aside when Jamie returns with William, not only because she and John come to an understanding, but because she knows that her issues take a backseat to what Jamie is experiencing. Both of Jamie’s biological children have been raised by other men, and it’s heartbreaking when Jamie tells John, "You’re a good father," since Jamie would have liked to have been a father to his only son. 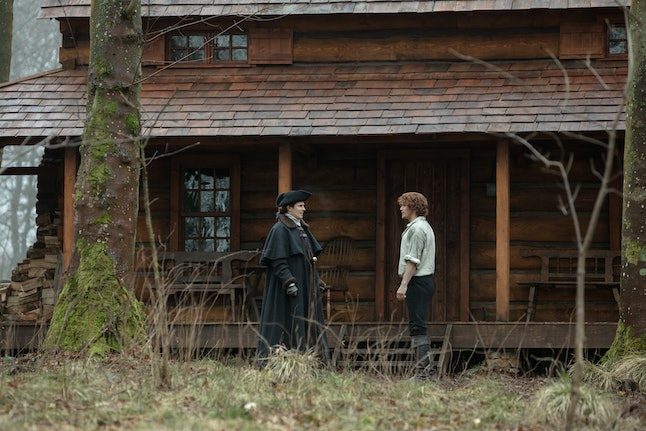 Of course, Jamie is eternally grateful that William is being raised by John, but with the chance to be a father stripped from him not once, but twice, it’s no wonder that Jamie and Brianna are going to have issues when she gets to the past. "It’s very difficult for Jamie because he wants so much to be a parent, and to be a parent to Brianna. But when she arrives in his life, she’s an adult," Caitriona Balfe told Bustle at New York Comic Con. "As much as he wants to be a father, the needs of an adult are very different from the needs of a child. That’s a very difficult balance for him to be able to strike."

In that way, "Blood of My Blood" serves as a reminder of what’s been taken from Jamie before Brianna arrives. His behavior is bound to be frustrating if he’s trying to parent and control Brianna, but his relationship with William (or lack thereof) highlights why viewers should have some empathy for him. And while William will be outraged if he ever finds out who Jamie really is to him, "Blood of My Blood" allows this son and father to bond in a glimpse of what could have been.