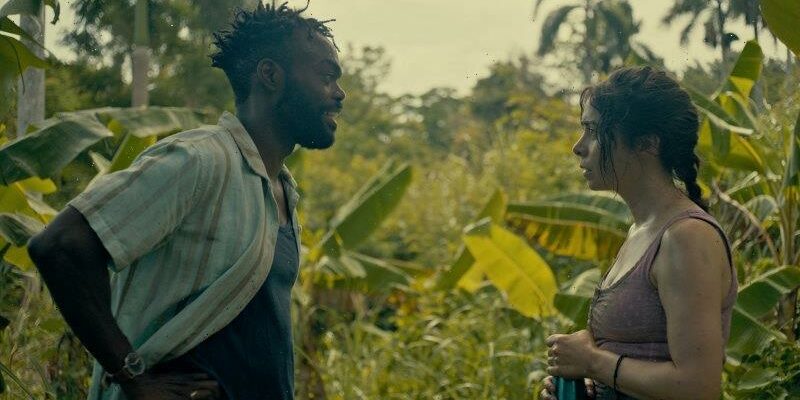 This article contains spoilers for the first three episodes of The Resort.

Given we’re knee-deep in obnoxious holiday season, with vast swathes of Australians flocking overseas to warmer climates and clogging up your Instagram feed, the arrival of The Resort on Stan* feels rather timely. 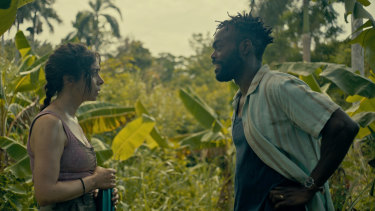 Emma (Cristin Miloti) and Noah (William Jackson Harper) end up on the holiday from hell in The Resort.Credit:Stan

The eight-part drama is set on the Riviera Maya, the glorious stretch of the Caribbean coastline on Mexico’s northeastern Yucatan Peninsula.

But not all is as it seems on the idyllic Riviera, and it soon becomes clear that The Resort is the latest TV series to slot neatly into the “holiday from hell” genre.

Last year HBO found great success with The White Lotus (available here on Binge), a series that used a stunning backdrop – in that case, the Four Seasons resort in Maui, Hawaii – to explore the dark side of who we are on holidays. The White Lotus became one of the most talked about shows of the year and was rewarded with a whopping 20 Emmy nominations.

The Resort shares much in common with The White Lotus, even down to its opening few frames.

Who’s who in The Resort?
The show begins with holidaymakers Noah (William Jackson Harper) and Emma (Cristin Milioti) arriving at their five-star resort, greeted by overly enthusiastic resort employees.

“How was your flight?” asks Luna (Gabriela Cartol), the resort’s concierge. “Turbulent,” deadpans Emma. Turbulent is an apt description for what is to follow, as it becomes apparent something is off.

The sun is too bright, the cocktails are too fruity, and Emma is clearly unhappy. Where Noah is overjoyed at the hotel’s all-inclusive policy (we don’t have to leave the resort for any meals!), Emma feels trapped (but what if we want to?). 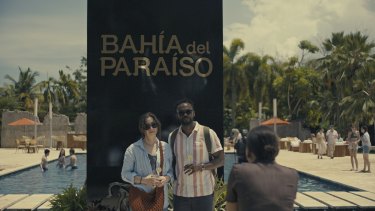 Not so happily ever after. Rather than address the problems in their marriage, Emma and Noah throw themselves into solving a missing persons case.Credit:STAN

When Noah falls asleep on the first night of their romantic getaway, Emma takes a bottle of booze to the hot tub and fires up an online quiz titled, “How do I know if I should leave my relationship?”

Emma’s marital malaise presents The Resort’s first major curveball and a clue that perhaps this island holds dark secrets. During an ATV jungle tour, Emma comes crashing off her four-wheeler and stumbles across an old mobile phone.

Side note: The antique phone is actually a Motorola Razr, the flip phone of choice for everyone in the mid-2000s.

After firing the phone up, Emma learns it belonged to teenager Sam (Skyler Gisondo), who went missing on the island in 2007. This leads her down a Google rabbit hole where she discovers that in 2007 the area was hit by a freak hurricane that levelled one of the island’s most prominent hotels, the Oceana Vista resort, but also resulted in a man’s body washing up on the beach. 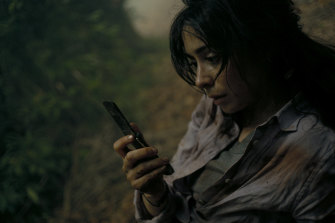 Bring back the Motorola RAZR. The popular flip phone might hold the key to The Resort’s biggest mystery.Credit:STAN

On the same night as the hurricane, December 26, two people were reported missing: Sam and another young woman, Violet (Nina Bloomgarden). And this is where The Resort starts to resemble another famously creepy island show: Lost.

What’s going on with the timelines?
Emma’s discovery is followed by a flashback, and so begins The Resort’s multiple timeline shifts.

He experiences his first taste of teenage heartbreak when he flips open his girlfriend’s pink Motorola Razr (seriously, they were everywhere back then) and spies graphic messages from her professor. A devastated Sam strikes up a relationship with Violet, who is holidaying with her father, Murray (Nick Offerman). 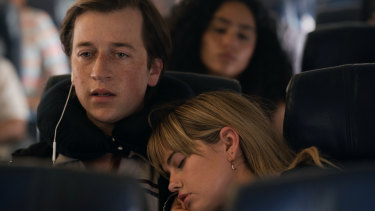 Sam (Skyler Gisondo) and his girlfriend, Hannah (Debby Ryan) in The Resort.Credit:STAN

The pair hit it off, and Violet invites Sam to a private staff party at the Oceana Vista resort, hosted by the mysterious head of security Baltasar Frias (Luis Gerardo Mendez), whose family runs the Vista.

Just to make things more confusing, we’re also treated to scenes of Emma and Noah meeting for the first time in 2007, long before Emma was drunkenly leaving the fate of her marriage in the hands of a Buzzfeed quiz.

Meanwhile, in the present day, Emma and Noah begin looking into what happened to Sam on December 26, investing all their energy into the mystery rather than, say, fixing their broken marriage.

Right, OK, so who are the bad guys in this story?
All signs point to Baltasar Frias. 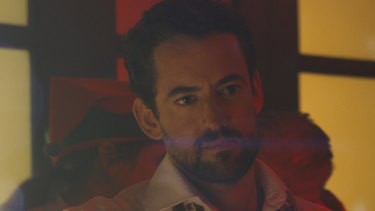 As a result of Emma and Noah’s real-time investigation, they’ve figured out that Baltasar was the man in charge of the Oceana Vista when Sam and Violet went missing. They ask around the island, but responses are mixed; some say that Baltasar is dead, while others claim he changed his identity.

They also ask Luna (remember the friendly concierge from the beginning?) about Baltasar, but she feigns ignorance. In the next scene, however, we see Luna visiting Baltasar, telling him that two tourists are asking questions about him after finding Sam’s mobile. It turns out Luna might not be so friendly after all.

Did you mention The Resort had a little Lost energy?
Yes. So far, we’ve seen hints that time travel, or at least the blurring of timelines, seems to be a theme in The Resort.

The show opens with a quote that appears to foreshadow what to expect: “The pursuit to recapture your past is a waste of time. The past lives in the past and is therefore non-existent in the present. Time travel has not been invented.”

These words are attributed to (the totally made up) author Ilan Ibera from his (totally made up) 1978 book El Espejo, or The Mirror, which itself also hints at some kind of duplication of time. This is also the same book we see Violet lugging around (a gift from her late mother).

It already feels like something cosmic is at play on the Riviera Maya, so perhaps Emma and Noah’s investigation will lead them to another time and place?

Should you stick with The Resort?
Any show best described as The White Lotus meets Lost is worth persevering with, even if the first three episodes are a bit head-scratching. Between Emma and Noah’s misfiring marriage and figuring out what happened to Sam and Violet, there’s more than enough to keep you coming back for more.

The first three episodes of The Resort are available on Stan now. New episodes every Friday. Stan is owned by Nine, the publisher of this masthead.