Jennifer Aniston and Reese Witherspoon showed off their journalism skills at the anchor desk on “Good Morning America” Monday ahead of their new series, “The Morning Show.” 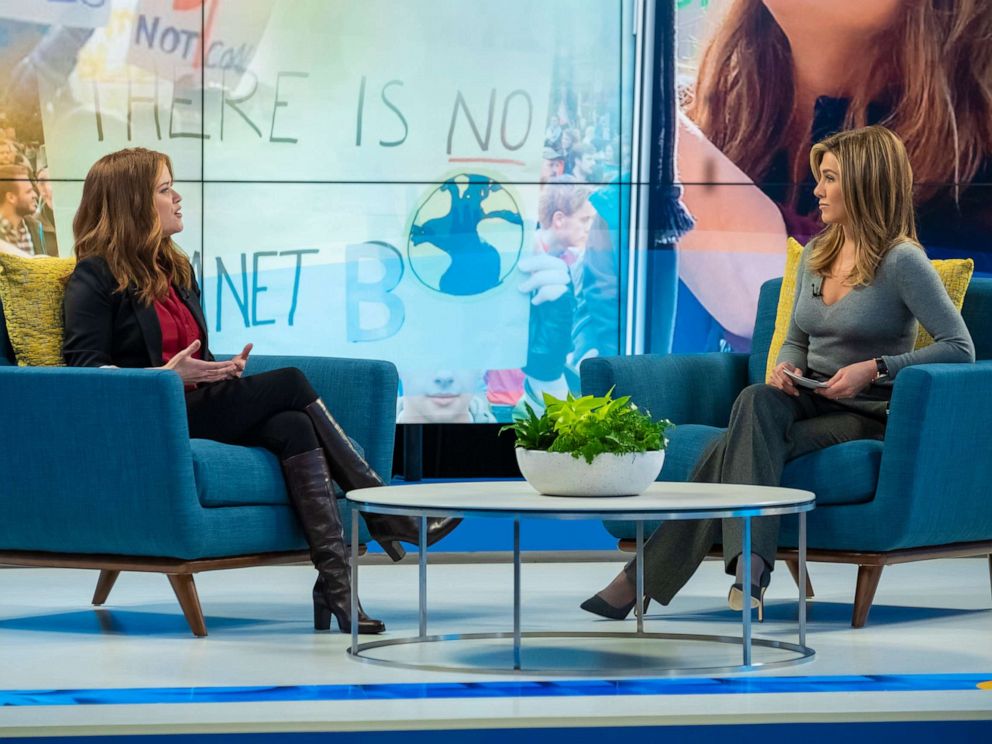 The pair, who first co-starred in “Friends” as sisters Rachel and Jill Green nearly 20 years ago, said they’ve been waiting for the right project to reunite ever since.

“We’ve been talking over the years. We wanted to do something and then this project came along and I called you or you called me and we were like, this is it,” Witherspoon said.

She still remembered the call to appear on the hit sitcom just after she had her daughter, Ava.

“I just had a baby so I was watching ‘Friends’ all the time,” Witherspoon recalled. “I was sitting the couch thinking I wish I could be on ‘Friends.’ Then one day my publicist said, ‘Do you want to be Jen Aniston’s sister?’ And I said ‘Yes.'”

She continued, “I got there and Jen was so sweet. I was so nervous. She was like, ‘Don’t worry, they like when you mess up.'”

“But she didn’t,” Aniston chimed in.

Now, the two women are executive producers and stars of the new Apple TV plus drama series that explores the cutthroat world of morning news, as they work to navigate the minefield of high-octane jobs while facing crises in both their personal and professional lives.

Aniston, who spent time on the set of “Good Morning America” to better understand the world of morning television, said she was most surprised by “the insanity that takes place from 5 in the morning until 7.” 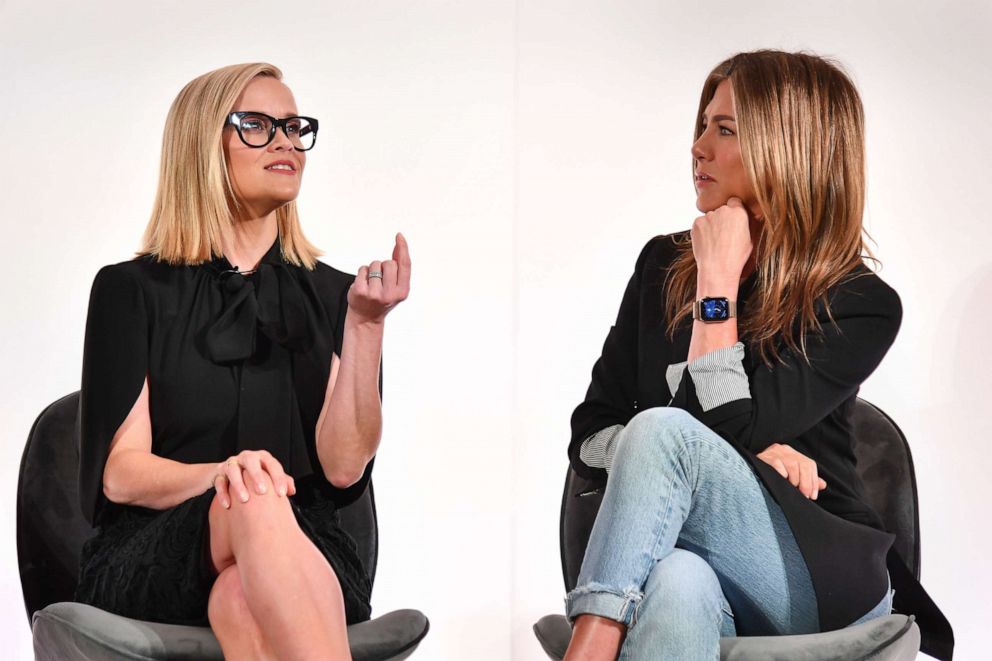 “It’s very quiet still, you know the halls are kind of just slowly starting to buzz and then [it’s] this engine that just starts to go, go, go,” she said. “It’s just brilliant — lots of respect to all of you.”

Both actresses agreed that this series gave them an opportunity to incorporate the Me Too movement from a unique point of view.

“It’s what our show was about,” Aniston said. “That’s what was happening in the world. So we took pause and figured out how to, you know, incorporate it into the perfect tone that we wanted to — which was sort of not black and white — allowing people to have a perspective because everyone was trying to figure out what is this new normal.”

“Its just added a whole other layer to the show,” Aniston added.

“He’s a human being, things are happening to him but he has a wife, he has children, but he has to figure out his career. I think our writer Kerry Aaron did a great job of making everyone fleshed out and very real,” Witherspoon said. 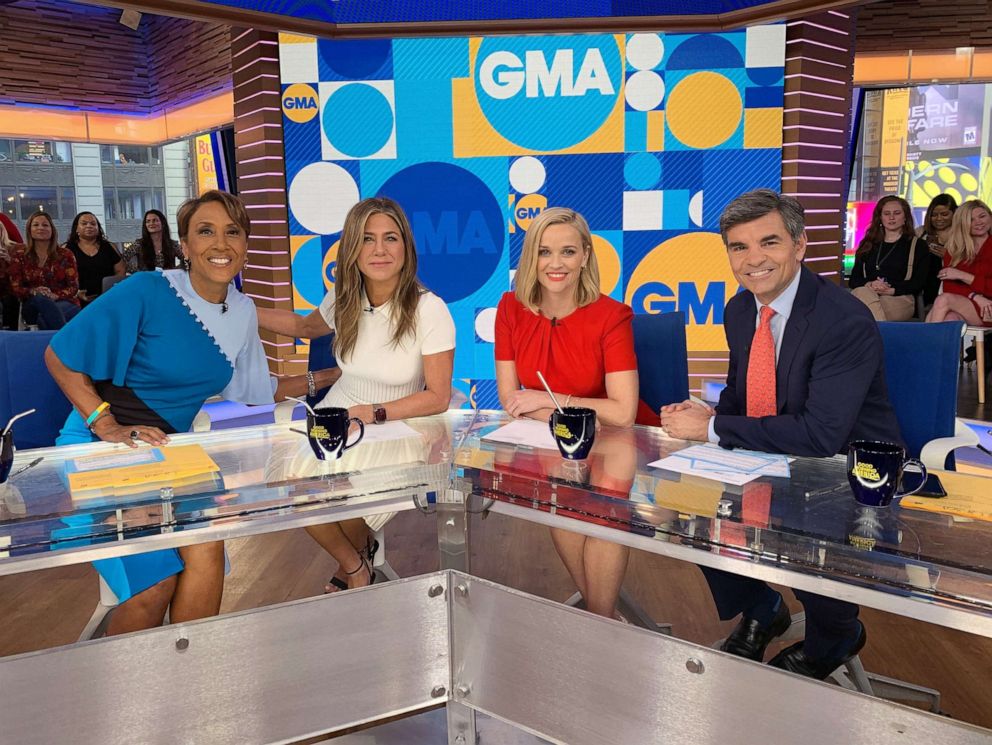 Although both Aniston and Witherspoon fit the morning newsdesk like naturals, neither one ever considered being TV anchors.

“I wanted to be a country music singer. It didn’t work out, but I’m OK,” Witherspoon said with a laugh, adding, “It’s been fun learning about journalism and the way its evolving so much.

“The fact that you have to digest all this information on a daily basis — it takes a lot,” Aniston said.

Aniston’s character on the show says, “sometimes women can’t ask for control, so they have to take it,” which reverberates as a central theme for strong women.

“The world didn’t tell us that we were supposed to be leaders, we never thought those opportunities would come and now here we are,” Witherspoon explained. “I think a lot of women are stepping up or being asked to step up and I think its fantastic.”

She went on, “Jen and I talk about it, even seven years ago the idea of us being producers was thought of as cute — but this has been an amazing experience because we go into big rooms of lots of creative executives and they actually listen to what we have to say.”

Duplass, who plays the show’s executive producer, equated the experience to stressors like holidays with the family.

“I did a little bit of research and shadowed some people and it’s a lot like being this sort of like stressed out Captain Kirk trying to keep the whole thing from crashing,” he said. “It feels like you are at a holiday with your family where as long as you’re in the kitchen you’ve got to be smiling. As soon as you leave the kitchen, all bets are off.”

Crudup said he enjoyed acting as a top network executive, a character he called “an opportunist” amid the chaos.

“He’s looking for the weakest link. He’s going to get them out of there and looking for the most powerful and going to take them over,” Crudup explained. “it’s nice to play somebody with that level of confidence.”

Pittman, who plays Witherspoon’s on-screen producer, said she helps Witherspoon navigate the uncharted waters of being an anchor.

“Bradley Jackson is kind of a fish-out-of-water and she’s strong and an opinionated woman and how she gets to be the lead anchor on the morning show, there’s a couple tricks to it and my character helps her figure that out,” she revealed.

Aniston and Witherspoon will have the first show on Apple’s new streaming platform and said the group have been “incredible partners” and “great collaborators.”