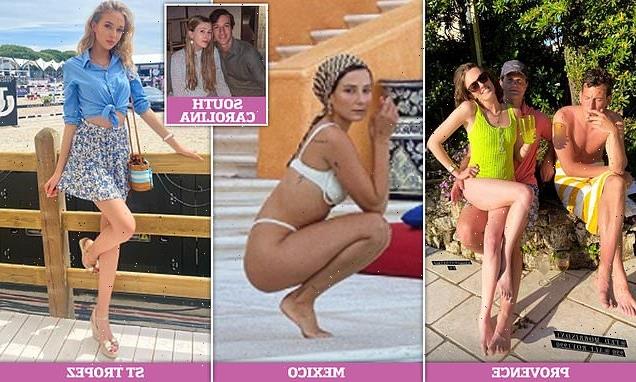 The start of a high society summer! Belvoir Castle’s Lady Violet Manners leads the glamorous aristocrats and fashionistas jetting off to VERY stylish hotspots including St Tropez and a five-star Mexican eco-resort

The start of June marks the beginning of summer – and socialites and fashionistas have wasted no time in heading to some of the world’s chicest holiday destinations in search of that first taste of sunshine.

From St Tropez to Mexico, the global jet set have been sharing snaps of their enviably stylish getaways as they make the most of long weekends in both the US and the UK.

British society beauties Hum Fleming, the great-niece of James Bond creator Ian, and Lady Violet Manners, of The Crown’s Belvoir Castle, jetted out together to Roquefort-les-Pins, in the south of France, just along the coast from where Prince Charles’s goddaughter India Hicks spent the weekend.

Between them, in the ever-popular St Tropez, are sisters Princess Chiara and Princess Carolina di Bourbone, who were dressed in their finery for a showjumping competition.

Elsewhere LVMH scion Alexandre Arnault is taking in the sights in Charlestone, South Carolina, with his fiancée Geraldine Guyot, while US-based fashion writer and influencer Alyssa Coscarelli has headed to Mexico. 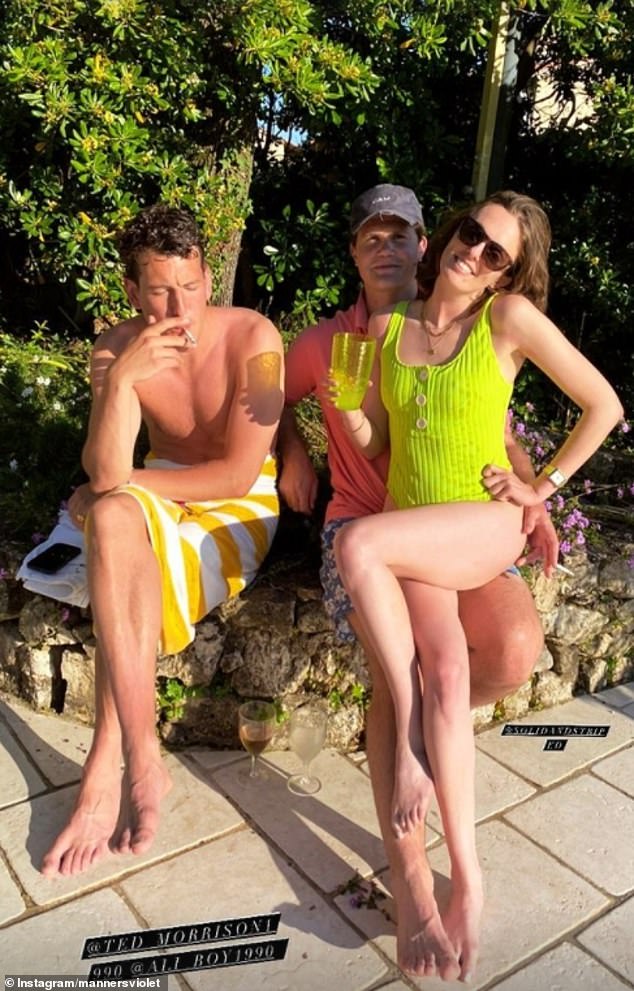 Fun in the sun! Lady Violet Manners, of The Crown’s Belvoir Castle, has jetted off to Roquefort-les-Pines, in the south of France, where she is spending time with friends (pictured) 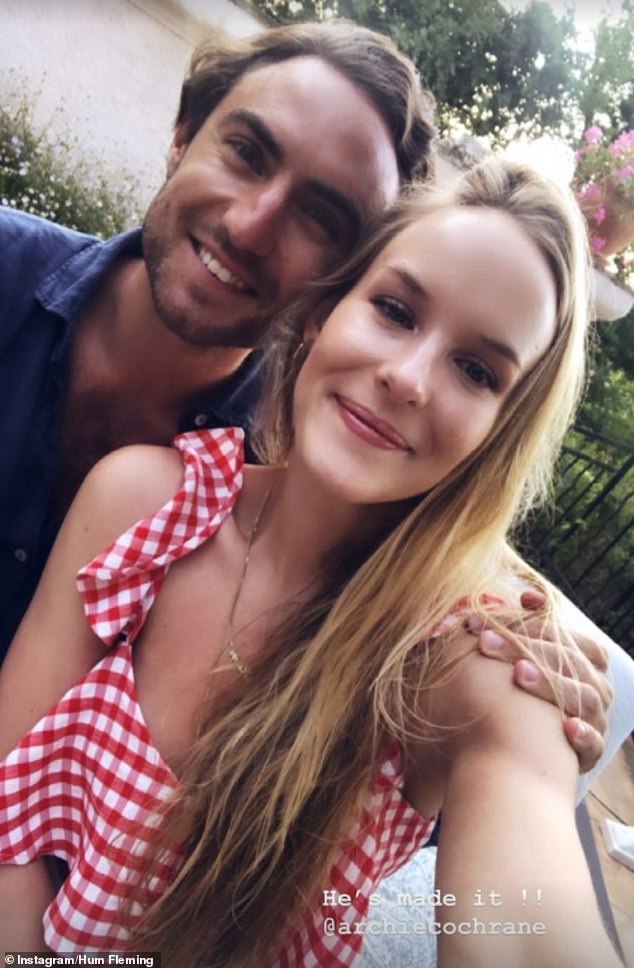 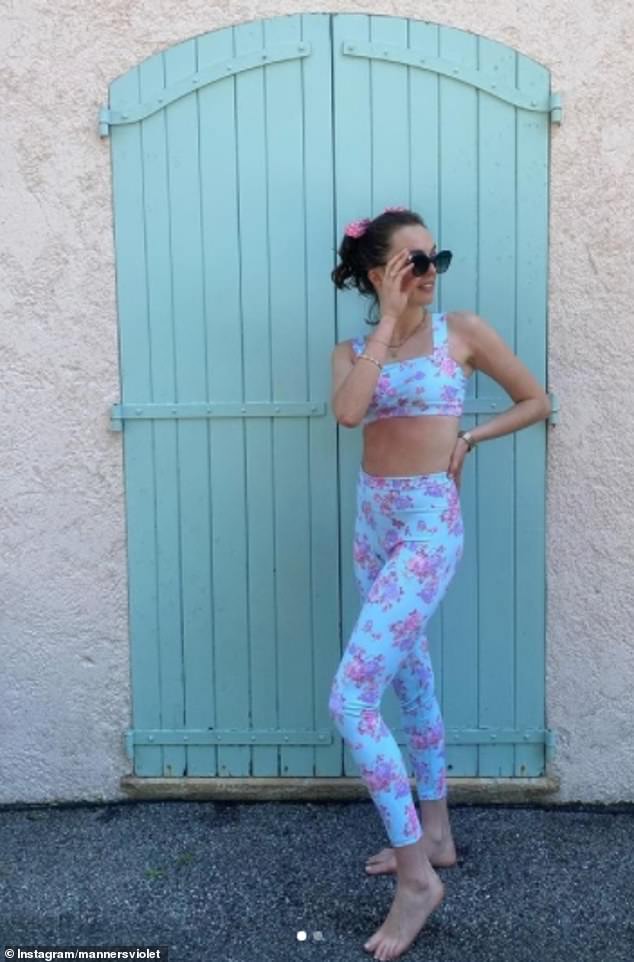 Strike a pose! Lady Violet has shared a number of snaps of her outfits and delicious meals

BFFs Lady Violet Manners and Hum Fleming have swapped the UK for the south of France where they are staying in a private residence with a pool.

The glam pair have shared snaps of poolside drinks, luxurious meals out and trips to local attractions including the village of Mougins, near Cannes, where Picasso spent his final years.

Lady Violet is the daughter of the Duke and Duchess of Rutland, who live at Belvoir Castle, in Leicestershire. The couple also share daughters Lady Alice and Lady Eliza, and sons Hugo and Charles, Marquess of Granby.

Violet and Hum are joined in the south of France by food stylist Lottie Covell.

France is on the UK’s amber list meaning the group will have to isolate for 10 days and take two Covid-19 tests on their return. 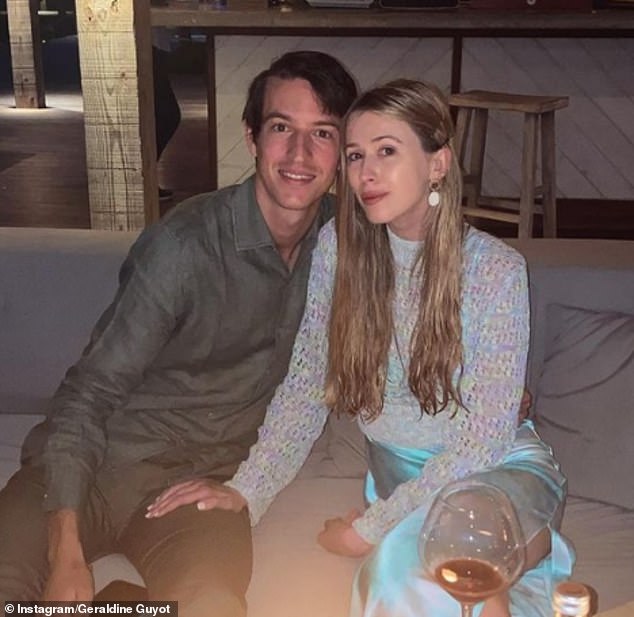 Bride and groom to be! Alexandre Arnault, 28, the second oldest son of LVMH chairman and CEO Bernard, 71, is on holiday with his fiancée Géraldine Guyot, founder of French accessories brand D’Estrëe. Pictured, the couple in a previous getaway snap shared on Instagram 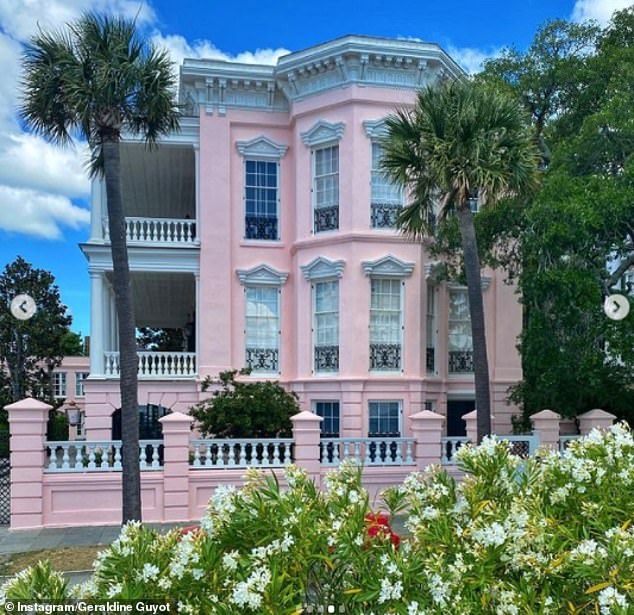 Taking in the sights: The couple are enjoying a visit to Charleston, South Carolina, and have shared snaps of the local architecture on Instagram, pictured

Alexandre Arnault, 28, the second oldest son of LVMH chairman and CEO Bernard, 71, is on holiday with his fiancée Géraldine Guyot, founder of French accessories brand D’Estrëe.

The couple have been dating since at least August 2019, when Alexandre first shared a photo of Paris-based Geraldine on Instagram, and became engaged shortly before Christmas 2020.

They are both enjoying a visit to Charleston, South Carolina, and have shared snaps of the local architecture on Instagram.

In January billionaire LVMH founder Bernard promoted Alexandre to the leadership team of Tiffany & Co. after concluding its $16billion acquisition of the American jeweller.

Alexandre, who has also held a position at Fendi, left his previous role as CEO of Rimowa, also owned by LVMH, to become executive vice president at Tiffany & Co., in charge of product and communication.

Meanwhile Geraldine was named to Forbes’ 30 Under 30 list for retail and e-commerce last year. 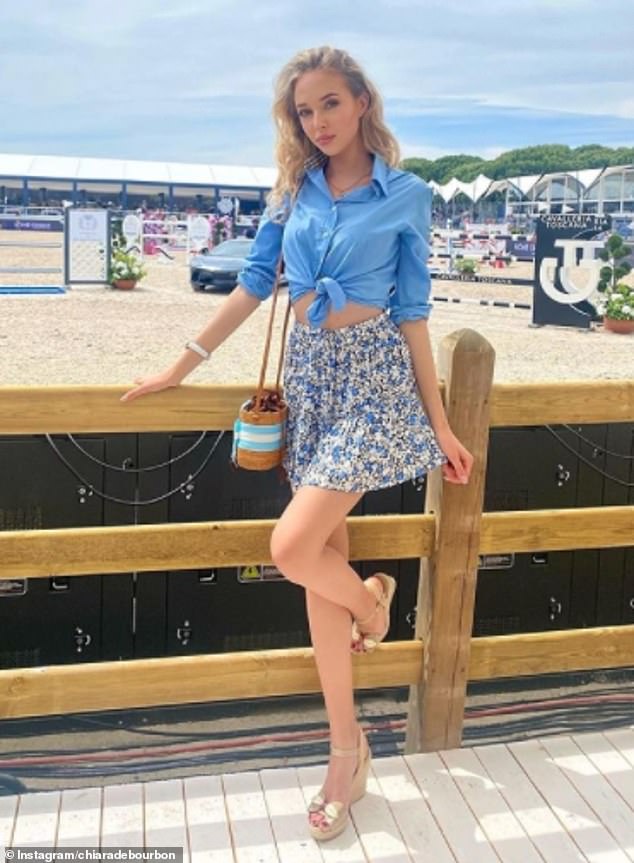 Day out! Princess Maria Chiara Di Bourbon-Two Sicilies, 16, pictured, is the daughter of Prince Carlo, Duke of Castro and Princess Camilla, Duchess of Castro. This weekend she was at the Athina Onassis Horse Show, a premier showjumping competitions, in St Tropez 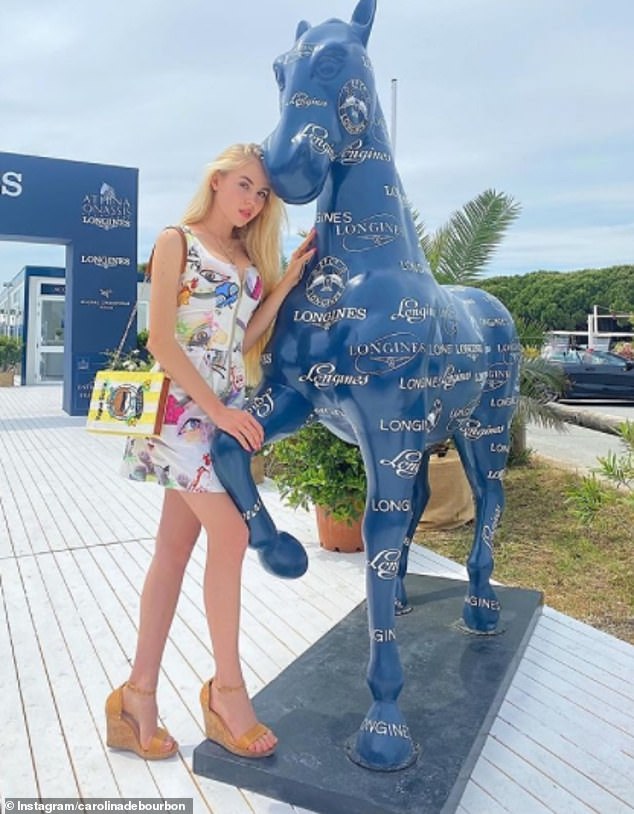 All out glamour: Carolina, pictured, and Chiara both shared snaps from the event on Instagram

Prince Carlo holds a claim to the now defunct throne of the former House of Bourbon-Two Sicilies, a cadet branch of the Spanish royal family, which descends from the Capetian Dynasty and ruled over Southern Italy and Sicily during the 18th and 19th centuries.

Although the family has no official remit, they spend their time doing charity work and promoting the interest of Southern Italy.

The prince’s daughters enjoy a life of luxury, spending their time between Italy, Monaco, Paris and St Tropez, soaking up the sun, sporting designer labels and making the most of their families’ wealth.

This weekend the sisters were in St Tropez for the Athina Onassis Horse Show, one of the world’s premier showjumping competitions. 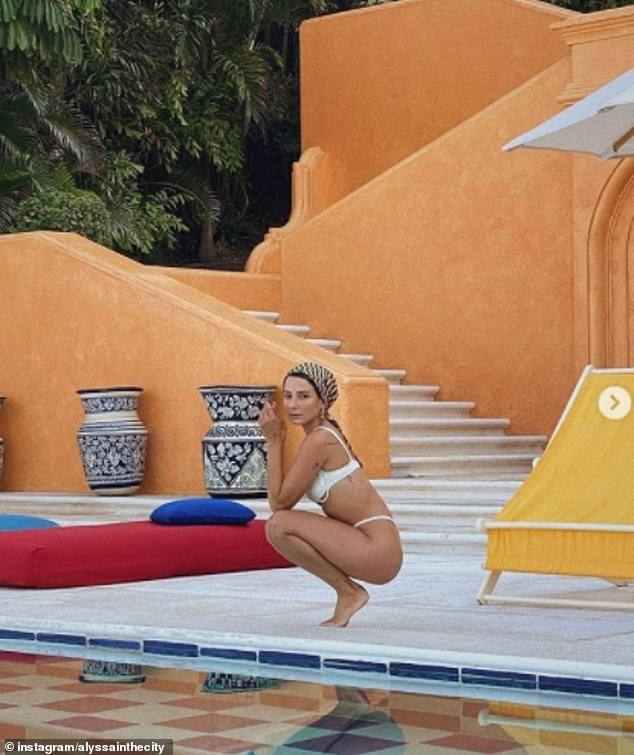 Exclusive getaway: Fashion writer and social media influencer Alyssa Coscarelli, pictured, who blogs under the handle @alyssainthecity, has jetted off to luxury eco-resort Cuixmala, on the west coast of Mexico. The fashionista is usually based in Los Angeles

Fashion writer and social media influencer Alyssa Coscarelli, who blogs under the handle @alyssainthecity, has jetted off to luxury eco-resort Cuixmala, on the west coast of Mexico.

The fashionista, who is usually based in Los Angeles, arrived in Cuixmala two days ago and has wasted no time in showing off her stunning surroundings – and beautiful beach-ready looks.

Cuixmala is comprised of a 30,000-acre nature reserve and was originally used as a private retreat for Sir James Goldsmith. 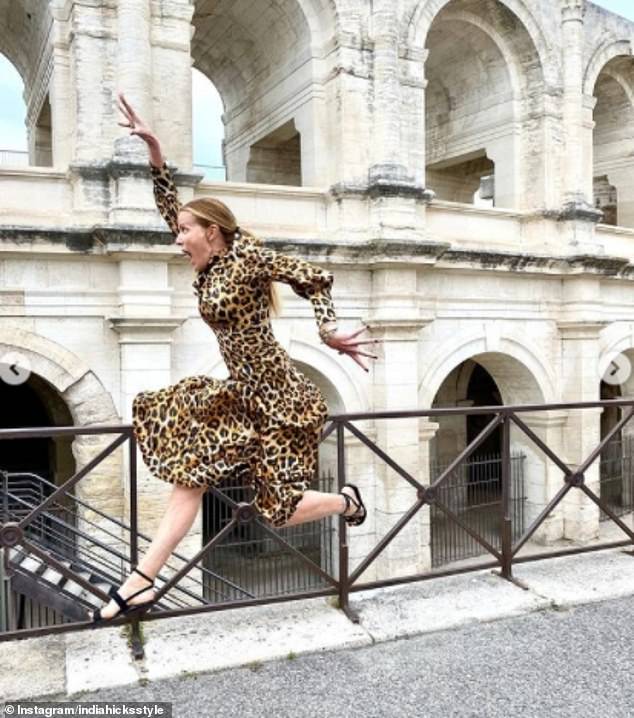 Jumping for joy! Prince Charles’s goddaughter India Hicks spent the weekend in Saint-Rémy-de-Provence, in the south of France, with her long-term partner David Flint Wood 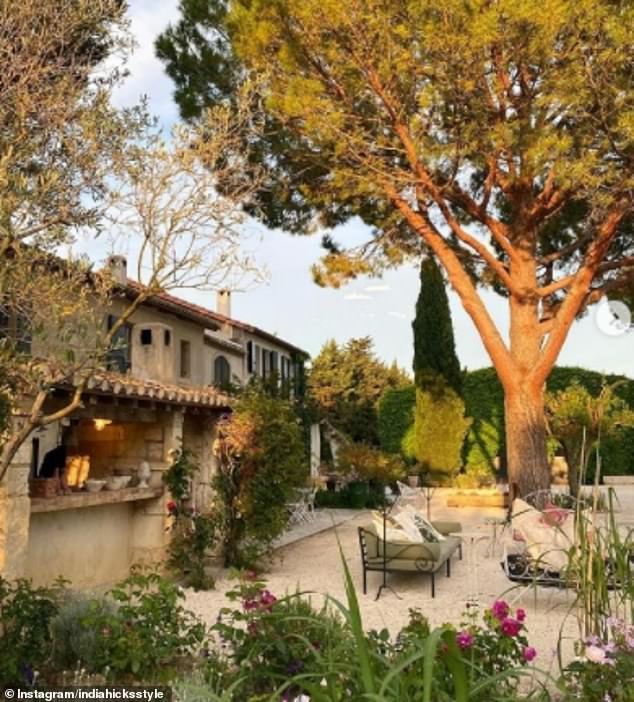 Idyllic: India shared snaps of her dreamy break in the French countryside on Instagram

Normally based in the Bahamas, India Hicks and David Flint Wood are currently in France and spent the weekend in Saint-Rémy-de-Provence.

The couple also enjoyed a stop in Paris.

India and David, who have been together in 25 years, are planning their wedding after announcing their engagement in November. They have already delayed the big day twice and it remains to be seen when they will rearrange.

India is the granddaughter of Lord Mountbatten, Prince Philip’s uncle, and her mother Lady Pamela Hicks was one of the Queen’s bridesmaids. 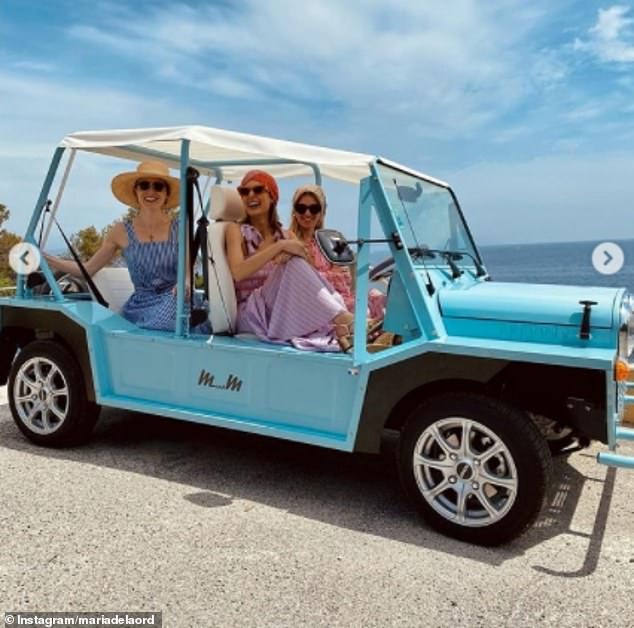 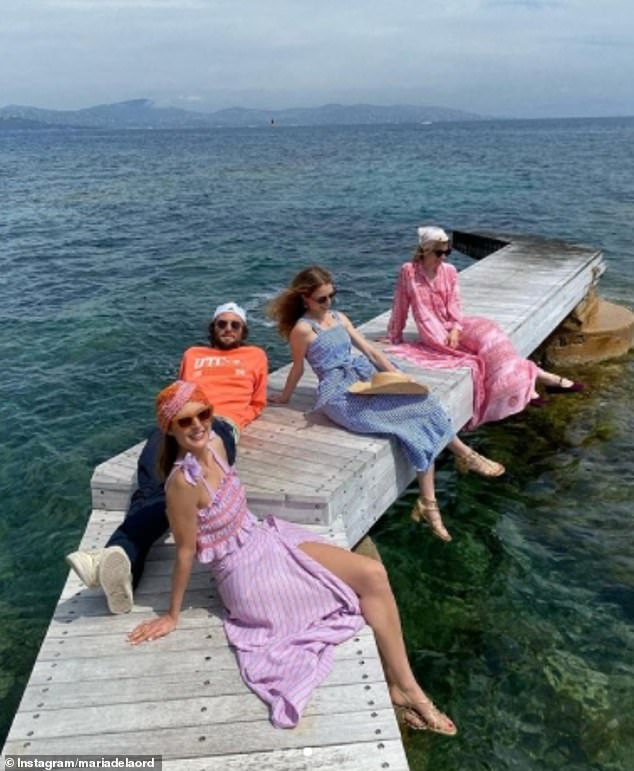 Enviably chic, even by lofty French standards, Maria de la Orden is usually based in Paris but has spent the weekend in the south of France where she posed up a storm with her equally stylish girlfriends.

The designer has founded not one, but two in-demand labels: La Veste and Maria de la Orden Studio, which are loved by well-heeled shoppers including Alexandra Tolstoy, Sabine Getty and Leah de Wavrin. 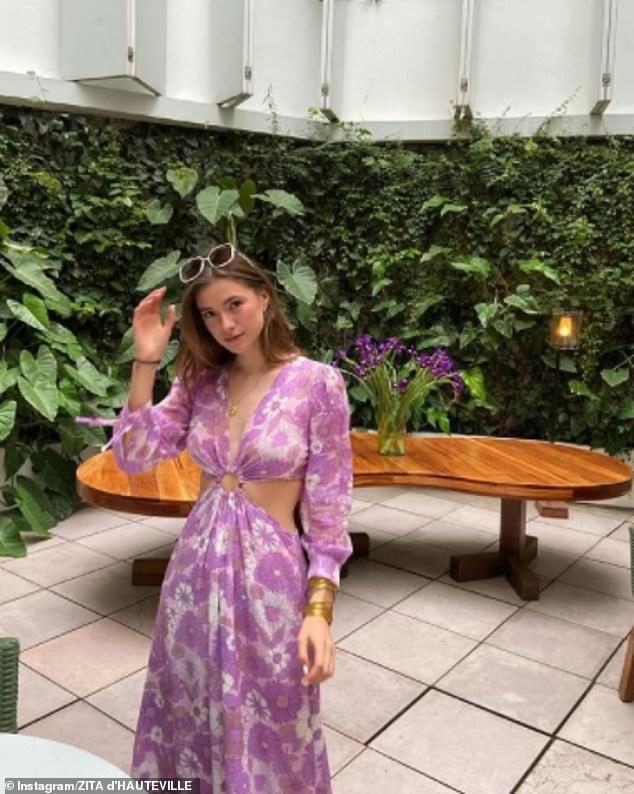 Oasis in the hubub: Zita d’Hauteville whose parents are the Count and Countess d’Hauteville, is currently soaking up the sun in Mexico City, Mexico, where she is staying at the exclusive Condesa DF Hotel. She shared this snap on Instagram yesterday

Her willowy frame and natural beauty led to Zita being model scouted through Facebook and she is now represented by Up Models and has secured brand partnerships with big names including Hermes.

Zita, who has 15,500 Instagram followers, juggles her commitments with a high-powered job at Google, where she works as an Account Strategist. She also holds a Masters degree from UCL.

The 24-year-old, whose parents are the Count and Countess d’Hauteville, is currently soaking up the sun in Mexico City, Mexico, where she is staying at the exclusive Condesa DF Hotel.