These days it’s considered a bit of a faux pas to ask a professional woman who is also a mother how she manages the juggle.

“You wouldn’t ask a man that!” is the common retort.

To which I say, who says? We should ask all parents with jobs how they manage. 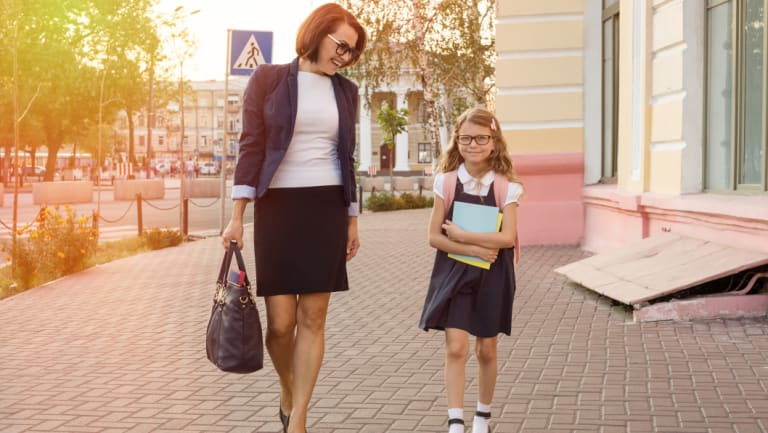 It’s possible to combine parenthood and a career, but you need to let go of perfectionism.Credit:Shutterstock

It’s no easy job to care for children and juggle a job, let alone a career. But one of the best ways to get better at it is to learn from how other people approach the challenge. Increasingly that’s most of us, as new figures from the Australian Bureau of Statistics show.

I’ve made a practice in my career of asking both men and women about work-life balance, especially when I was writing about entrepreneurs a few years ago.

A few times I interviewed male startup founders on stage at conferences. If I knew they were fathers, I asked – to applause from the audience – ‘reflecting on the sacrifices you’ve made, and your work-life balance, tell me can men really have it all?’

It always solicited good responses, though frustratingly often the answer was a wife holding the home front. Occasionally, but less often, female entrepreneurs told me they had a husband who stayed home with the children. But as Annabel Crabb observed in her 2014 book The Wife Drought, there’s a shortage of men in that role.

It’s also a fact that for modern families struggling with the cost of housing and everything else, it can be an economic necessity for parents to work. It’s less about having it all and more about keeping a roof over your head, food on the table, and if you’re fortunate, the occasional holiday and saving for retirement.

There’s also growing awareness that it’s a worthwhile investment for both parents to remain employable in case circumstances change. No one ever plans to become divorced or widowed, but life is unpredictable. 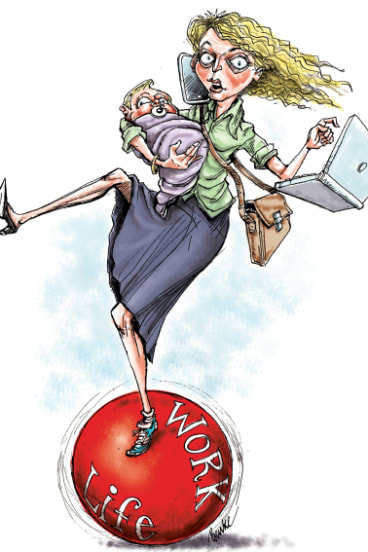 There are reasons why most parents work, but the juggle can be a struggle.

On Tuesday the ABS released new figures showing it’s now the norm for children to live in families where all the parents in the household work.

That applies to both children in couple families – where there are two parents living with the child – and single-parent families.

In June 2017, nearly two out of three children in couple families (64 per cent to be precise) had both parents working, up from 59 per cent a decade ago.

Meanwhile, 59 per cent of all one-parent families with dependent children living at home worked.

But there’s no denying the juggle can be a struggle. One way many people cope is by working part time, but even this strategy is declining.

In June 2017, one in four couple families with children had both parents working full time, up from 21 per cent a decade ago.

Single parents have to be both the main caregiver and the main breadwinner, competing roles that take priority at different times.

The notion that women can’t “have it all” – that is we can’t have a happy family and a meaningful career – remains culturally potent, despite the figures showing more of us are simply getting on with it.

I regularly read pieces about women trading in their high-powered jobs to focus on being the perfect mother. They’re often high achievers, head-girl types, which makes me wonder if the problem is perfectionism.

In my book, the secret to having it all is to not let the perfect be the enemy of the good. You can be a good-enough parent and good enough at your job, and that’s OK.

Yes, sometimes the demands of the job and family will be in conflict. Life is about choices. One day you might miss bedtime because of another day at work, another day you might take the morning off to go to school presentation day.

Frankly, sometimes I’ve felt overwhelmed by the challenge. Rather than give up, I found someone to coach me.

For me, it’s all about coming back to the present moment and focusing on the best thing I can do right now. Whether that’s drinking tea in the garden, practising pilates, folding laundry, playing with my children, or finishing this column the night before it’s due. (It’s rarely playing on my phone, so I’m loving the new screen time controls).

Having it all doesn’t mean doing it all. Let your partner, or a friend or family member do things, even if it’s not how you would do it, and remember there’s nothing wrong with outsourcing.

Just as a chief executive of a company does not need to be the receptionist and bookkeeper, children do not need parents to be the sole purveyors of cooking, cleaning, Christmas craft and chauffeur services. There are many ways to show love.

We need to be present for both our jobs and our children – but the secret is to make our presence consistent rather than constant.