The Chilling Adventures of Sabrina returns Friday with a yuletide special — meaning the weather outside isn’t the only thing that’s frightful. But the last time we saw our favorite half-witch, her relationship was on the rocks. Could a little Christmas magic bring Sabrina and Harvey back together in the Chilling Adventures holiday special?

At the end of Chapter 10, the finale of the show’s recently debuted first season, Sabrina did the classic hero thing of breaking up with her significant other in order to protect him — but hey, at least she stopped keeping secrets from him, something else that heroes with supernatural powers are wont to do. She and Harvey were already in rough territory because she tried to bring his brother back from the dead with traumatizing results.

Newly devoted to the Dark Lord, Sabrina then dyed her hair white and sashayed into the Academy of Unseen Arts ready to embrace all things wicked, even tossing a wink at the flirty and definitely-into-her Nick Scratch.

That said, in the promo for "A Midwinter’s Tale," the two do share a sweet moment (above)! So, at the very least, they’re on, or attempting to be on, gift-giving terms. Maybe they aren’t done for good. Fingers crossed for some kind of reconciliation, though since the episode is set between Season 1 and Season 2, it’s likely that nothing major will go down.

In an interview with Entertainment Weekly, creator Roberto Aquirre-Sacasa said that the holiday episode does stand alone, but will connect some of those dangling narrative threads. "There are elements that we serialized through the first part of the season that we did have to carry through and help us set up the second part of the season," he said. "We see a little bit more of the aftermath of Harvey and Sabrina, their breakup at the end of Part One. We see how Sabrina’s relating to her mortal friends."

Ross Lynch, who plays Harvey, also discussed where Harvey and Sabrina could be heading during a recent press set visit, according to TVLine. "Harvey and Sabrina’s relationship just isn’t […] the same,” he explained of their status in the Sabrina special. "They’re not spending as much time together. I’m there, but it’s pretty minimal. There’s not a lot for me in this particular episode because of those circumstances." 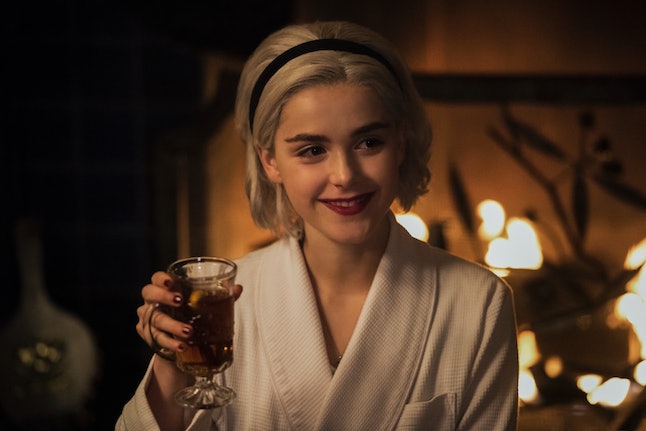 Luckily, The Chilling Adventures of Sabrina will return for Season 2 and has already finished filming, so fans likely won’t have to wait long for more. As much as Harvey and Sabrina are #endgame, don’t you kind of want to see what happens with Nick? Just a little bit?

"I think that with these kinds of TV shows or shows for young people, it never hurts to have a love triangle," creator Roberto Aquirre-Sacasa teased to EW. "It never hurts. That’s what I’ll say about that."

Christmas, like love, is all around. Maybe Harvey and Sabrina won’t be back together in the Chilling Adventures holiday episode, but spring is coming and hopefully by then, things will be less chilly for these lovebirds.