Australians will be asked to accept a new “risk framework” that opens the economy as millions of people are vaccinated against the coronavirus, ending an era of state border closures, shutdowns and sudden social controls.

Prime Minister Scott Morrison is urging states and territories to accept a new outlook that puts a priority on the economic recovery, declaring “the risk has changed” since the tough restrictions of last year. 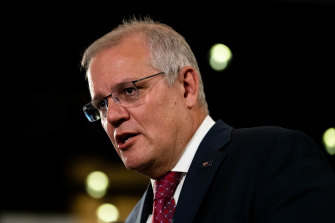 Prime Minister Scott Morrison: “The 2020 response to COVID-19 must be different in 2021. Why? Because the risk has changed.”Credit: Janie Barrett

NSW Premier Gladys Berejiklian is also pushing for an end to the “embarrassment” of state border closures, while Victoria’s acting Premier, James Merlino, said the goal depended on the speed of the vaccine rollout.

The federal approach emphasises the strength of the economic recovery and means key industries such as travel and tourism will have to wait for further assistance rather than gaining immediate help to replace the $101 billion JobKeeper scheme when it stops at the end of this month.

Mr Morrison and key cabinet ministers oppose the idea of extending the wage subsidy for selected industries and will offer targeted grants for sectors suffering from international travel bans.

The new risk management framework is meant to guide federal, state and territory decisions this year on border controls, shutdowns and other measures that restrict economic activity in the name of protecting health.

The work, ordered by National Cabinet four weeks ago, is being led by Phil Gaetjens, the secretary of the Department of Prime Minister and Cabinet, with his counterparts in each state and territory.

While the work is in its early days, federal officials said the states and territories appeared to be amenable to the proposals, which could lead to a more unified approach to easing restrictions and avoiding state border bans.

“It’s not just about health because the health risk is diminished,” Mr Morrison said at The Australian Financial Review Business Summit.

“And it’s important that all premiers, chief ministers, prime ministers make decisions that are very commensurate with the new risk framework that we are facing this year, which is different to last year.

“And so for that reason, I expect the decisions made this year should be different to last year.”

Mr Gaetjens told a Senate inquiry on Tuesday his goal was to ensure consistent responses to the lower risks as the vaccines prevented people going to intensive care units at hospitals.

“As the vaccine delivery goes forward, as more data becomes available from overseas, we can, if you like, replace the way we are looking at things,” Mr Gaetjens said.

“If we’ve got the vaccine, if we’re not getting community transmission, if we’re not getting huge case loads within hospitals and ICU units, how can we, most effectively for the benefit of the country … open up as quickly as we can to actually get Australia back running wherever possible?

“If the risk of community transmission is decreased, then we can actually not resort to measures that have been used previously.”

The federal message is in line with the stance taken by Ms Berejiklian in recent days on living with COVID-19 in the same way the community has become accustomed to living with annual flu outbreaks.

“But imagine the economic opportunities for us moving forward, and the freedom of our citizens, if we just assess risk in a reasonable way.

“When you’ve vaccinated a large chunk of people who are high risk of getting the virus, well, then you do need to consider what is next in terms of easing restrictions and even considering beyond Australia’s borders what that means in the future.”

Ms Berejiklian called the internal border controls an “embarrassment” and said she wanted national consistency so employers could have confidence about the future.

“Imagine the economic opportunities for us moving forward, and the freedom of our citizens, if we just assess risk in a reasonable way.”

Mr Merlino said the Victorian government wanted to take the state to a “COVID-normal” condition but emphasised the task for the Commonwealth in getting millions of people vaccinated.

“How quickly we get to that point will be based in large part on how quickly the Commonwealth’s vaccine program is rolled out, building that important line of defence across frontline workers and vulnerable people in the community,” he said.

In a step towards bringing more Australians home from overseas, the federal government is planning to expand the Howard Springs quarantine facility near Darwin to take at least 1500 people a fortnight by May and 2000 by June.

The expansion would have to wait until cyclone season was over in April, Deputy Secretary Alison Frame said in the Senate committee hearing.

“We’ve taken the opportunity, as soon as it’s allowed by the climatic conditions, to increase the capacity of that facility,” she said.

About 39,000 Australians are registered with the Department of Foreign Affairs as wanting to return. Since December 23, 20,567 people have returned, and nine federal charter flights have brought home just over 1700 in that time.

Labor senator Kristina Keneally said citizens were being left behind by the government.

“The Prime Minister announced 20 charter flights, that we were going to have them all home by Christmas, but what we know from the COVID committee today is there’s no actual plans,” she said.

“If you’re a stranded Australian, you’d be watching today’s hearing and pulling your hair out in fury and frustration.”