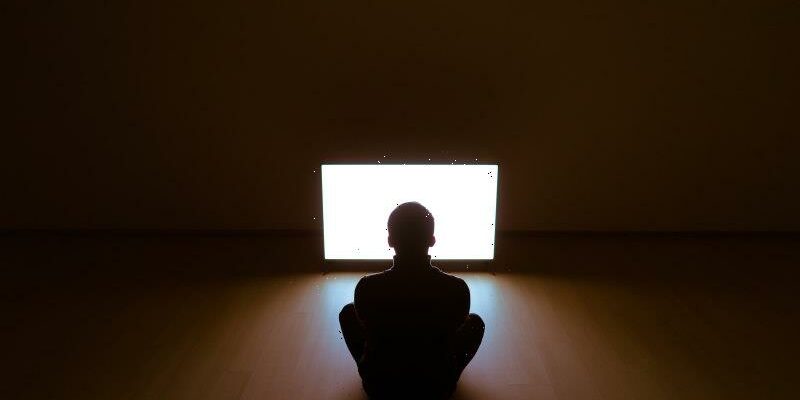 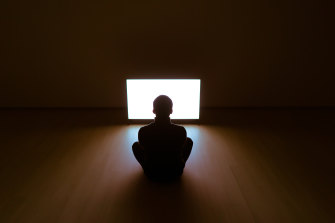 Why is there a general COVID blackout on our screens?Credit:iStock

It is 2070, and my future grandchildren have just been told by my son that he grew up during a global pandemic that killed millions of people. Tens of millions, actually. In this vision of my family’s future, my grandchildren, who worship the moving image as much as their long-dead grandpa once did, have never seen any reference to this lethal pandemic in any of the classic early-21st century films and archaic 2D television series still popular on the holo-net. It’s impossible for them not to think my son is taking the piss. “Good one, Dad,” they laugh. “Tens of millions dead, yeah, right.”

Increasingly, I fear this outcome is inevitable. And if it’s not, then a realistic alternative is that any future whisper about the pandemic will be accompanied by fantastical inaccuracies since perhaps the only record in popular culture about it will be found in books (good) and on social media (bad).

Rewind, back to the present. Or rather, the global pandemic we are, in fact, living through despite its near-total omission from film and TV series.

I’m a novelist and screenwriter who works in the United States, United Kingdom and Europe, and Australia where I now reside. Desperate to come to terms with the pandemic and the deaths of family and friends, I’ve developed a thriller TV series on the subject. Unfortunately, agents in all three countries inform me there is no appetite in their markets for any COVID-related projects. Producers soon concur; networks and streamers – and audiences, by implication – are only looking for “escapism”. “It’s just too soon,” is repeated from different mouths. Variations of, “We need some perspective first” are expressed. When I vent about the absurdity of this to fellow screenwriters, they tell me, almost without fail, that nobody wants to watch a series about COVID, we need some perspective first. 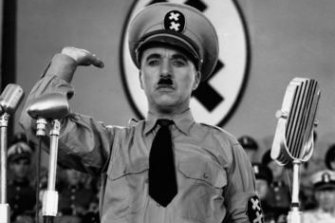 Charlie Chaplin in the 1940 film The Great Dictator.

Here’s the problem, from my point of view: in the history of film and television, there just isn’t much evidence to support the argument that audiences don’t want to immediately engage in narratives about culture-shaking global traumas.

As the Great Depression dragged on, Charlie Chaplin, Preston Sturges, Frank Capra, and numerous others produced film after film about it in real-time and continued to explore the subject further following the global economic recovery. Hollywood even birthed the gangster genre in response to the institutional decay and hard-scrabble poverty that devastated its audiences around the world – don’t worry, immigrants, you too can end up on top of the world!

During World War II, literally hundreds of films were produced in the midst of the war and hundreds more afterwards. They were a form of catharsis for audiences at home, a way to connect with their loved ones’ experiences thousands of miles away, and, of course, as recruitment and fundraising tools.

The Cold War similarly produced scores of films and, with the advent of television, incalculable hours of scripted TV about nuclear and communist anxiety. During the 50s, most science-fiction films existed in dialogue with this anxiety, in fact, and by the 70s and 80s some of these titles, including The Thing from Another World and Invasion of the Body Snatchers, were already being remade because their relevance had not waned.

For a more recent example, consider 9/11 and the War on Terror. In the Aughts, a slew of films and TV episodes and even whole series were produced discussing both, starting with a special episode of The West Wing shot and aired less than one month after the World Trade Center buildings fell. Many films and hours of TV reflected the moral ambiguity of the global trauma, helping us understand and develop a shared vocabulary, even mythology about the experience. 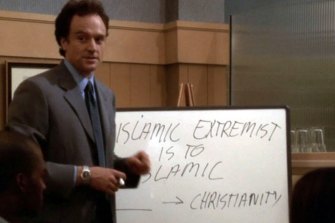 Bradley Whitford in the 2011 Issac and Ishamel episode of West Wing.

Whether Mr Deeds struggling against the machinations of scheming big money types or the Dark Knight being challenged about his abuse of surveillance technology even if for apparently noble ends, storytellers have long used the moving image to help us confront the worst of the 20th and 21st centuries and question how we feel and what we think about it.

That is, until COVID.

In the early days of the pandemic, you wouldn’t have thought this would be the case. Audiences flocked to older films about pandemics, especially Outbreak (1995) and Contagion (2011), transforming them into streaming hits. There have been many theories as to why, but if history has any say in the matter, it’s safe to assume it was so people could vicariously stare down the potential of dying horribly from what might yet turn out to be a modern Black Death and experience the triumph of collectively overcoming such impossible odds.

But as the pandemic failed to quickly resolve itself as so many hoped it would, new and original work for the screen failed to materialise to satisfy this need on the part of audiences. 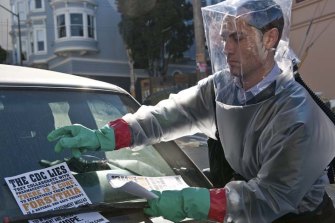 Exceptions exist but are so rare they immediately stand out. Grey’s Anatomy and other US medical procedurals tackled COVID head-on, in part because, I’ve been told, many worried it would be disrespectful to the medical profession if the pandemic wasn’t depicted honestly. In the UK, Jack Thorne’s Help met with universal acclaim. COVID has appeared elsewhere on film and television, sure, but most typically as either a plot gimmick (COVID caper Locked Down), what amount to episodes of the week on the subject before getting back to COVID-less narratives (The Morning Show), or blip acknowledgements to quickly move past (such as And Just Like That… where just like that a quick reference lets audiences know COVID isn’t relevant to their good time anymore). In a strange twist, one of the most emotionally confronting series about a pandemic to air during the COVID pandemic is Station Eleven, a limited series about a civilisation-ending virus; adapted from Emily St. John Mandel’s 2014 novel, it went into production before the pandemic, finished production after an initial shutdown, and, in its completion, now provides audiences with a powerful allegorical way to interrogate their own anxiety and loss from COVID. 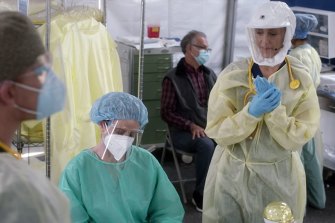 This general COVID blackout on our screens means that for the first time in the history of the moving image, thousands of hours of film and TV are yearly being produced depicting fictional realities that either completely pretend away or only passingly acknowledge some of the most significant facts of our own. No characters we love die from COVID, no characters’ loved ones die, and nobody must make sense of a death toll that dwarfs any suffered by combat in any war ever waged. It’s the Disney-fication of all filmed pop culture, with no room for the greatest global horror of our time.

So, is the absence due to COVID itself as a subject or something more culturally problematic that preceded it and, perhaps, even shaped how we talk about the pandemic today?

I think that by the start of the 21st century, something began to shift in how we, as a society, sought out an understanding about our reality. It’s not difficult to make the leap to social media and for-profit news, both of which excel at providing curated distortions of objective reality to individuals that are either marketed as or mistaken for just that, as to why. Fox News has even successfully argued in court that much of its so-called reporting is “rhetorical hyperbole” that cannot reasonably be interpreted as facts. The advent of “fake news” on social media platforms further confounded the veracity of ‘facts’ provided by these former truth-tellers.

Today, instead of relying upon a multitude of artists challenging our preconceptions or interpretations of world events, more and more of us turn to an echo chamber we’ve carefully created for ourselves thanks to Twitter, YouTube “experts”, for-profit news networks, and so on.

The result is an increasingly fractured society.

It is no surprise, in such an increasingly polarised world, that the bean counters driving film and TV production would seek to minimise their financial risk by avoiding any subjects that could violently divide – and cost them – potential audiences.

It’s also no surprise that those creating art might seek to avoid grappling with such a contentious mob mentality from many who seem to have become dissociated from reality. Thanks to social media, even a small minority can now monopolise conversations, attempt to cancel films and filmmakers, and impact box office success or TV ratings. In other words, the audiences with the most warped view of reality now define what is acceptable “reality” for the rest of us.

The failure of film and TV to interrogate global traumas like COVID-19, events so big that no individual can make sense of them without help, has real-world consequences. 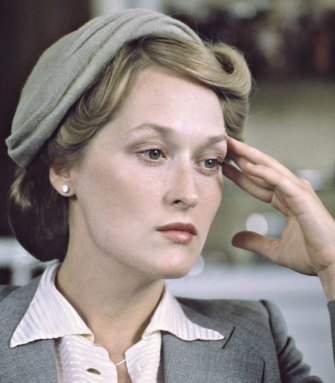 For example, the 1918 Spanish Flu pandemic that killed 50 million people doesn’t have any appreciable presence in early film history, which is probably why most of the world has no idea it happened or could happen again. Ignorance is bliss…until it’s too late. Or consider the Holocaust, which was essentially “denied” by a virtually inviolate cone of silence that Hollywood and Europe’s film and TV industry imposed regarding the mass murder of more than six million people. By 1979 when the landmark TV series Holocaust aired to upwards of 120 million viewers, generations that had grown up largely ignorant of the genocide began to wake up to its horrifying dimensions. There were even some on director Marvin Chomsky’s production team who believed he was making up facts. Holocaust re-educated much of the world and led to a wave of films and TV projects that helped us develop a broader understanding of the tragedy.

Today, there appears to be a real risk of diverting the role of cultural mirror away from film and television to social media and for-profit news networks, both of which are, by their very nature, incentivised to tell their audiences whatever they want to hear to keep engagement high. “Confirmation bias,” as it’s more appropriately called.

Art has been human beings’ most consistent way to see through these biases and develop a better understanding of the world. It has been a constant since our only canvases were cave walls and throughout the pantheon of gods’ constant shape-shifting.

What happens to us if it entirely divests from reality and begins to primarily or even solely provide escapist simulacra of our world and our experience of passing through it? And how would that collective rejection of reality – of trauma as significant as a global pandemic and whatever traumas surely follow – be any different from any individual denying a serious personal trauma? If psychotherapy has taught us anything in the past century, it is that trauma doesn’t disappear simply by not naming it. Eventually, it rears its ugly head.

I hope this current trend changes quickly, not only so I can one day explore my own experiences during this pandemic, but because I need to watch others’ interpretations of it, as well. If it doesn’t, I worry that in 50 years, my grandchildren will still be paying the price for this blackout. “Good one, Dad – tens of millions dead, yeah, right.”

Cole Haddon is an Australian-American film, television, and graphic novel writer. His first novel Psalms For The End Of The World is published by Hachette on August 30.