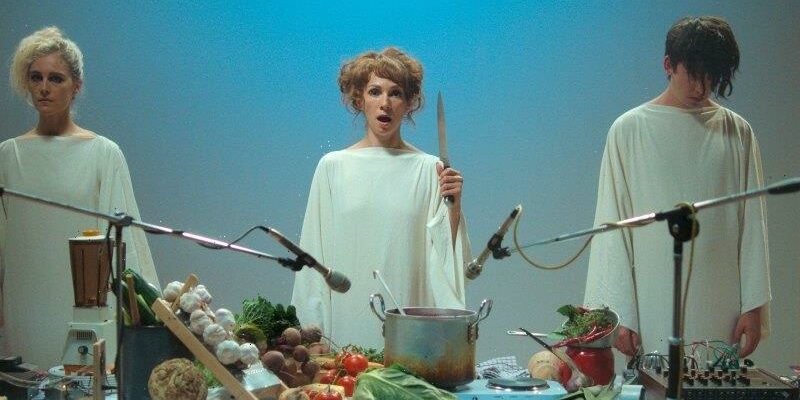 Talk about playing with your food. English writer and director Peter Strickland has for some years been part of an experimental band that makes music by recording the sounds of cooking. 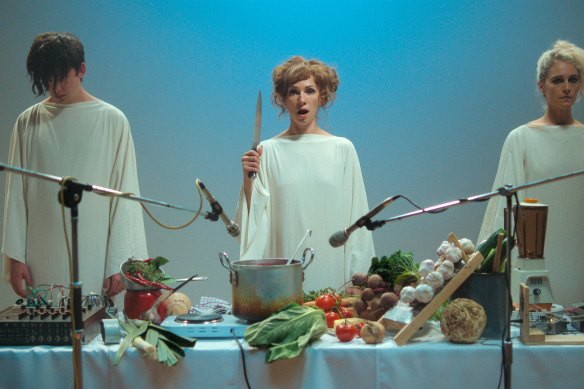 He jokes about the origins of the Sonic Catering Band being the result of a bout of food poisoning and a dream in which a Tory health minister was in telepathic alliance with a tapeworm sect.

That he has a wicked sense of humour is never in doubt: “The Sonic Catering Band formed, striving to perform a new working practice in electronic music whilst not having to worry about where their next meal would be coming from…”

Unless you know this, Flux Gourmet makes no sense. Even when you do know this, it makes little sense. It’s a strange piss-take on the theme of artists and their art, benefactors and their demands, and the public’s inability to distinguish shit from Shinola.

If you thought Tracey Emin and Damien Hirst had already said all that with their unmade beds and their cows in formaldehyde, think again.

Flux Gourmet is art school cool, flipped and fried, its cleverness only outdone by its desire to shock. On this last bit, filmmakers have to be careful. John Waters had Divine eat a dog turd on film 50 years ago: after that, there’s not much point unless you eat the whole dog, and this being an English film, there is none of that nonsense. Everyone has their limits.

That point is made early on. At a large country house, the Sonic Catering Institute, artists compete for residencies, which is really just a bed and a place to do some wacky recording, presided over by the marvellously overdressed patron Jan Stevens (Gwendoline Christie, in panda eye make-up). 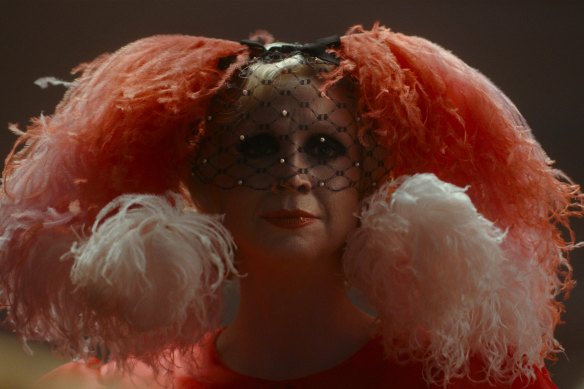 An as yet unnamed collective is in residence, doing their stuff. Another group, the Mangrove Snacks, bitter at missing out, throw stuff through the windows, disrupting meals at which no one ever actually eats. Jan Stevens explains why they didn’t get the residency: “I don’t like what they do to terrapins”.

The no-name group consists of a brittle domineering egotist called Elle di Elle (doctors will see the pun about bad cholesterol), played by Fatma Mohamed; a withdrawn just-out-of-school youth called Billy Rubin who hides behind a filthy fringe (Asa Butterfield) and an enigmatic, somewhat vulnerable young woman, Lamina Propria (Ariane Labed), who used to be Elle’s lover, but is now her antagonist.

The medical puns continue in those names, but you can look them up yourself.

On the fringe, observing everything with notebook and camera is the writer Stones (Makis Papadimitriou), the only likeable character in this whole foody farce. Stones has terrible flatulence.

Controlling it makes him sick with discomfort and shame. He needs to fart to live – which is probably about as profound as the film gets. Stones narrates his woes in an amusing voice-over in Greek, the one person onscreen with any perspective. I guess that makes him the Greek chorus.

Strickland has a formal rigour about his repetitions, but who cares? The scenes are beautifully mounted and excessive, in a Greenaway way, but again, who cares?

If you have something to say, audiences will listen.

What most of us find it harder to endure is nudge-nudge wink-wink undergraduate humour dressed up as satire. At least I think it’s satire, but given that he does actually spend his time sticking microphones into bowls of suet pudding, who can say?

To be fair, there are some funny bits, in between the overly loud close-ups of sizzling liver and pureed I-dunno-what. It’s a comedy baked into a heavily crusted pie. It takes some getting to, but it’s in there somewhere.