Matt Healy, the frontman of British band The 1975, made international news last year when he pulled a male fan onto the stage during one of his gigs and kissed him — a move which earned him both praise from some corners as an LGBTQ+ ally, and also criticism for potentially exposing that man to legal persecution (the gig was in the notoriously anti-gay Dubai).

This week, Healy spoke at length about his gay fans in an interview with Attitude, recalling how the first kiss he ever saw was between two men, and how he has grown up surrounded by queer culture. It’s worth noting for American readers that Healy’s mother, Denise Welch, is a soap actress and low-key gay icon in the UK, so he does come from camp lineage.

“I tend not to talk about my sexuality that explicitly because I don’t really have to and all things are subject to change,” he said in the interview, adding: “I’m an aesthete. I see things as objectively beautiful, so men can be objectively beautiful. Sometimes, I see men and I’m like, ‘Fuck me, he’s peng!'” 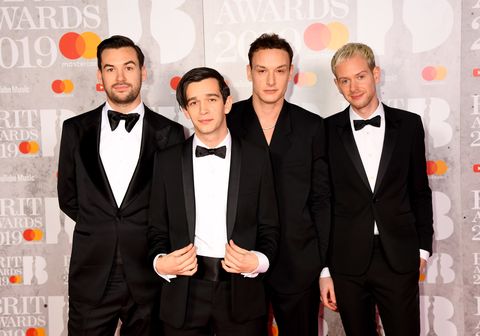 An aesthete is defined as somebody who appreciates art and beauty. Which, let’s be honest, can be applied to pretty much anyone and everyone. Describing yourself as an aesthete, as opposed to just someone who notices when people are attractive, is the kind of pretentious self-mythologizing you might expect from somebody in their first year at liberal arts college.

Healy followed this with a quick “no homo” disclaimer, saying that for all his love of his gay fans, and his ability to use his eyes and observe pleasing features in other guys, he is still attracted to women. “Then sexuality gets changed for me because I would, and have, kissed beautiful men, but I don’t want to fuck them. It stops for me when it comes to [sex].”

But kissing a man in such a heightened context—on stage, in the middle of a set, in front of an enraptured audience—is still something Healy was able to do from a position of privilege, as a straight-presenting celebrity. It’s “I Kissed a Girl” for the indie crowd.

A number of media outlets reported on Healy’s “aesthete” comments as if he were coming out, or expressing some kind of hitherto unknown sexual identity, in much the same way that an offhand remark made by music producer Mark Ronson earlier this year resulted in him becoming the temporary face of sapiosexuality.

But what must be remembered when discussing terms like “aesthete” and “sapiosexual” is that they refer to looks and personality, areas where we all have certain preferences when it comes to dating. They don’t relate to sexual or gender identity, and it’s highly unlikely that somebody who says they’re a sapiosexual or aesthete would find themselves being discriminated against in the workplace, harassed in the street, or even physically attacked, as so many individuals within the LGBTQ+ community do.

Nobody ever saw a pair of beautiful, attractive opposite-sex partners holding hands and thought, “that’s unnatural.” It’s perfectly fine to be attracted to smart, good-looking people. But please, let’s not make out to be something it’s not.