“What’s the weirdest thing people don’t know about you?”

We’re running low on small talk and fast approaching tipsy. Normally, I’d brush it off, or say something flippant in keeping with the playful second-date vibe.

For once, I have a proper answer – only I’m not sure whether she really knows she’s asking for it. She’s angling for a fun fact, not a dealbreaker. I hesitate. And of all the pauses I could have presided over, this one is pregnant. 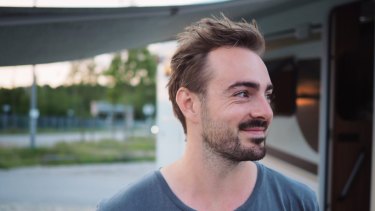 ‘It feels incredibly odd to ever disclose this to someone I haven’t known for a lifetime,’ says Charlie Lawry.

The honest answer is: I’m a sperm donor.

It feels incredibly odd to ever disclose that to someone I haven’t known for a lifetime. The select few currently in the loop (prior to this article) are either family or close friends. When I told my parents prior to doing the deed, it went less than brilliantly. I can’t blame them.

Wrapped up in their shock was the knowledge that neither I, nor my older sister, have come close to producing grandkids. Add to that their steadfast commitment to orthodoxy. Tattoos, piercings – even adventurous haircuts – were always a no-no in my upbringing. Even now, at 31, the hangover of these expectations persists.

However much we might play it down though, dating basically boils down to strangers trying to fast-track some kind of intimacy, be it emotional or physical.

Getting to know someone is delicate in any circumstance. We start off with a sanitised version of ourselves, gradually drip-feeding more personal info as both parties build trust and rapport. By the time we’re comfortable enough to showcase our full three-dimensional weirdness, the hope is that our partner has already bought in sufficiently to take it in their stride.

We all start off with a sanitised version of ourselves, gradually drip-feeding more personal info as both parties build trust and rapport.

I'm not embarrassed by my choice to donate. It’s just not something I ever thought I would do. Nor is it something I take lightly. With the amount of paperwork I've had to wade through, I couldn't possibly. And then there's the stigma. I hold those judgments myself a lot of the time, even after the fact. I certainly wouldn’t have donated to a sperm bank of my own volition for random or repeat use.

For me, the opportunity arose to make a one-off gesture for close friends – a female same-sex couple who live in Germany.

I previously shared a flat with one of them and we grew close. We’ve since spent multiple holidays together. Their wedding was the most heartwarming I’ve ever attended. And, crucially, I’ve never known two people more loving or better equipped to raise children.

We had a number of brutally honest discussions over several months to get all our concerns and motivations out in the open. Now, the papers are signed and they’re aiming to start the process around September this year. Whenever the baby does arrive, I’m absolved of any financial and legal responsibility. The child is free to know exactly who I am, but, in practice, I’ll function more like an uncle who lives far away.

Sperm donation is still incredibly weird to me. In all honesty, if I’d been in a committed relationship of my own at the time, it probably wouldn’t have eventuated.  Knowing that I was never naive enough to think it wouldn’t have some bearing on future relationships. At this stage, at least, I’m at peace with it.

Now that I’m back in Sydney and back on the dating apps, the issue is one of timing. At some point during the clumsy tango of courtship, my "business" becomes their business. Too early and it's a monumental overshare – the admission as likely to scare someone off as the act itself. Too late and it starts to feel like a breach of trust. In any case, I’m quickly learning that there's no smooth segue.

I pride myself on being pretty candid on the dating scene. People deserve to know who they’re spending their time with. In the age of dating apps, clear expectations become increasingly vital.

Access to an endless stream of suitors heaps pressure on our early impressions. You see it on some Tinder dates – one person gets up to go to the bar or the toilet and within seconds the other is already back to swiping and chatting to their competition. Truly galling to witness.

It's a tightrope act, but you know that the moment you step into the area. If you’re going to play it cagey and non-committal, greener grass is only ever a swipe away. At the same time,  the potential for rapid-fire rejection hardly fosters an atmosphere conducive to truthbombs.

And so I smile, listen, iron my good shirt, and ask how many siblings she has, just hoping I’ll recognise the right moment.