IT'S like something out of a Carry On film: Tesco is selling packs of veggie sausages called Little Willies.

We can't think why, but the meatless bangers are making shoppers giggle in the aisles and on social media too. 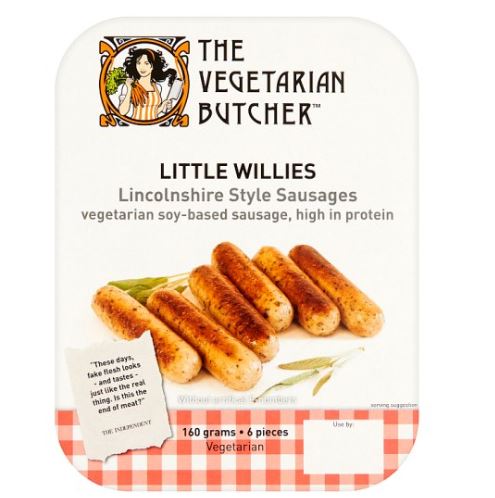 In case you didn't know, a sausage is probably the most common euphemism for what a man keeps in his trousers.

And Dutch sausage brand The Vegetarian Butcher has really gone there and named one of its meatless sausage products Little Willies.

The pork-free porkers are made from soy and are designed to taste like Lincolnshire-style sausages.

A lot of shoppers rave about the taste on social media.

But that's not the main reason they're receiving lots of attention, of course.

Customers can't believe the cheeky name the sausages are sold under – and they're loving it.

One joked: "I grew up in Lincolnshire and sure I saw some willies, but buddy. They weren't sausages." 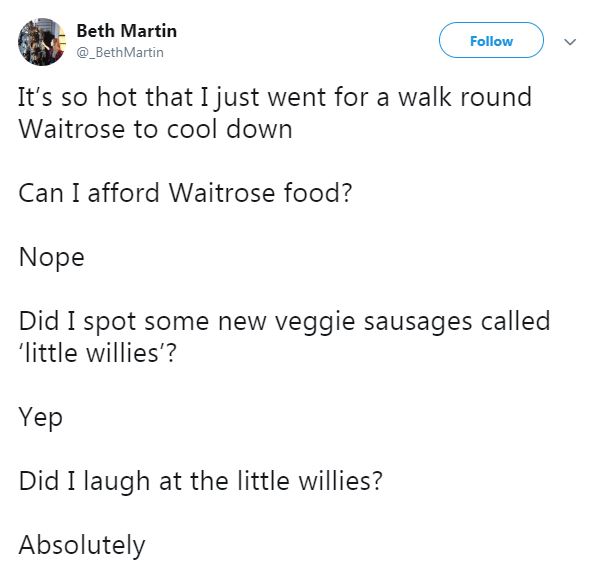 Another cheekily added: "It's a fact, vegetarians have little willies."

A shopper tweeted: "Who on earth decided to call sausages little willies. And why are my parents so immature that they bought them for be just because of it?"

Another said: "It’s so hot that I just went for a walk round Waitrose to cool down.

"Can I afford Waitrose food? Nope.

"Did I laugh at the little willies? Absolutely."

The sausages have been on sale in the UK for a couple of years but it's only recently that shoppers have started to pick up on the hilarious name.

The Sun has asked Tesco and The Vegetarian Butcher to comment on the cheeky name and we will update this article if we hear back.

Sainsbury's is selling a 1.8metre sausage that comes rolled up, making it easier to barbecue.

Morrisons and Aldi have previously also had a foot-long sausage price war.

Meanwhile, we've found out how much pork is really in your supermarket sausage – and it might shock you.