Opposition Leader Peter Dutton has accused government frontbencher Andrew Leigh of departing from convention in casting doubt over whether King Charles III will replace Queen Elizabeth II on the $5 note.

Leigh, the assistant minister for treasury, signalled this week that swapping the Queen for the King on the $5 note was not an automatic transition, saying her effigy on the note was not connected to her status as the monarch. He said the government would make “an appropriate announcement in due course” about who might replace her on the note. 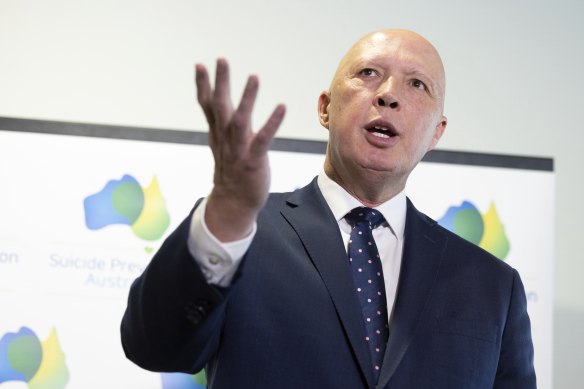 Opposition Leader Peter Dutton has accused government frontbencher Andrew Leigh of taking advantage of the Queen’s death to suggest King Charles might not replace her on the $5 note. Credit:Alex Ellinghausen

Dutton, in an interview with 2GB’s Ray Hadley, said Leigh’s view was “not based in fact” and accused him of departing from a convention whereby the reigning monarch has traditionally appeared on the lowest denomination of Australian banknote.

“It’s trying to take advantage of the circumstances that we’re in at the moment. I’d be surprised if the prime minister supported Andrew Leigh,” Dutton said.

“I’d be disappointed if he did because if we’re a republic at some stage, then that’s a decision for the Australian people to make, but we’re with our current arrangements at the moment and we should honour those arrangements and that includes in relation to the $5 note.

“There’s a protocol that’s in place and again, I don’t understand why he would feel a need to come out at the moment and to make, what is a unilateral decision – something that he’s decided by himself without consultation.”

Coins bearing the image of King Charles will start entering circulation next year, but Leigh’s remarks have spurred a debate about whether someone other than the monarch should be on the $5 note.

Prime Minister Anthony Albanese has been reluctant to discuss the potential redesign of the banknote, saying instead that he was focused on the Queen’s funeral.

“We will deal with these issues appropriately, in an orderly way, in a way that is respectful, so I have not turned my attention towards that matter,” he said this week.

Greens senator Lidia Thorpe said Indigenous elder and celebrated actor Jack Charles, who died this week, was a “great candidate” for the $5 note.

“We just lost a king in our own country, who was subjected to colonial violence from the moment he was born. We owe it to him, and First Nations people, to remember King Jack Charles and end the Stolen Generation once and for all,” Thorpe said.