In many ways, Olivia Ansell seems unwittingly to have been preparing herself all her life for her biggest gig to date – artistic director of Sydney Festival which opens on January 6.

In person, Ansell, 43, exudes positivity, perhaps one of the most important traits required to drive the behemoth that is Sydney’s annual cultural hooley. She also has a wicked laugh.

And while no cultural event of this size ever goes off without a hitch or two, Ansell could be forgiven for thinking the universe has targeted her first festival more than most. Among the slings and arrows headed her way so far are the Omicron outbreak, the relentlessness of the La Nina weather pattern threatening to play havoc with the schedule and, more recently, calls for a boycott of the festival from a coalition of Arab groups objecting to $20,000 in funding the festival received from the Israeli Embassy. Ansell hasn’t personally commented about the impact of the boycott, relying instead on a statement from the festival board.

Our lunch takes place before the boycott and Ansell suggests we meet at the upbeat restaurant Esteban. I figure I know Sydney pretty well but the address of this newish Mexican joint threw me. Temperance Lane, it turns out, is in the centre of the CBD, running off George Street, adjacent to the RM Williams store. Given Esteban’s vast collection of tequila on display the irony of its address is not lost. 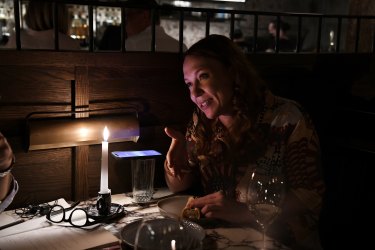 The restaurant, in a refitted print shop, is all concrete floors and dark wood panelling. On this particular day it is jam packed – COVID-19 be damned – and VERY NOISY.

Just as well then that my lunch companion is, on her own admission, loudly spoken. It comes she supposes from years spent sleeping in her bedroom next to the home recording studio, with her pianist father working late into the night alongside a who’s who of popular musicians of the time.

This was in the decidedly un-hip suburb of Gymea Bay in the Sutherland Shire. But Ansell most decidedly was not part of the Puberty Blues/Surfer Chick set growing up. 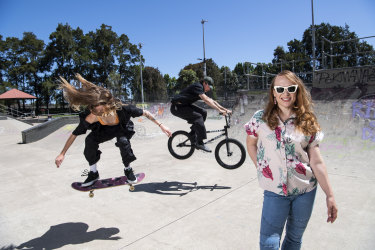 Olivia Ansell could have been preparing for her latest gig her whole life.Credit:Louise Kennerley

“I was a fair-skinned, red-headed modern dancer,” she says. “You weren’t going to find me at the beach. I’d just fry!”

Her father was Tony Ansell, a legendary musician, who died aged 55 in late 2000. Hugely popular among his peers, he played with luminaries including Don Burrows, the Daly Wilson Big Band and Galapagos Duck. He also co-wrote TV themes for shows including Lateline, A Big Country and the ABC Nightly News. 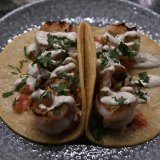 Her mother, Joanne, is a choreographer, dancer and dance teacher who is still teaching at “71 going on 50″.

“I grew up in a household full of the most incredible musicians like Kerrie Biddell and Su Cruickshank,” says Ansell. “There’d be film and TV producers asking my father to compose scores and my mother would be there with all sorts of artists choreographing shows. I’d run from the recording studio downstairs to upstairs to where the dance studio was with this amazing world around me. And then the dining table was often used for production meetings.”

However, despite being surrounded by dancers, it took a little while for that particular gene to awaken in the young Ansell.

As a six- or seven-year-old coming home from school there would be ballet classes going on at home but all she wanted to do was jump in the pool.

“Ballet looked very arduous and exhausting to me,” she says. “I was a little bit of a ratbag so I’d be swimming and waving to all the children taking their ballet classes.” 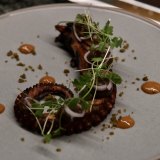 As she became a little older she discovered a taste for drama, which gave her a chance to “be expressive” and decided to give dance another go. At that point the discipline of the artform all began to make sense.

“I suddenly fell in love with it,” she says. “I loved matching the movement to the music. I loved what that felt like. And I suddenly developed this discipline. Ballet requires artistry but also a physical perfection you can never achieve. Nothing can ever be perfect in dance but you’re constantly striving for this aesthetic. You keep wanting to perfect it – to go back the next day and approach it differently to achieve that aesthetic in a better way than you did the day before.”

Surprisingly, however, her parents were less than keen for their daughter to follow them into showbusiness. Their ambitions for young Olivia tended more towards traditional careers such as the law or science.

“That was exciting to them because showbusiness was something in my family that they always did,” says Ansell, whose great-grandfather was a circus ringmaster and her grandparents on both sides were musicians, opera singers, puppeteers and jugglers.

“For me to have a career in something other than showbusiness was exotic to them.”

They even enrolled Ansell in Danebank, a private girls’ school in Hurstville, in a bid to remove the stars from her eyes. But true-to-form, she was not to be denied.

“I’d get on the train and sail straight past Hurstville and get off at Redfern,” she says. “I’d have my dance tights and leotard and ripped t-shirt in my backpack, walk up to Bodenwiesers [dance centre], take modern dance classes all day then get back into uniform and catch the train home.”

Eventually there was a “family meeting” and a tearful Ansell negotiated with her parents to study dance full time and complete her HSC by correspondence (even then, she scored an ATAR of 93).

At 17 she took herself off to study in the US, spending time at the legendary Alvin Ailey School in New York. She then studied dance at Brisbane’s QUT.

However, one of the most important lessons she learned around this time was outside the classroom and came from dad Tony.

“There was this audition I went for and I didn’t get it,” she says. “I came home upset and my father got very stern with me. He said, ‘Rejection is part and parcel of being in this industry. If you can’t handle it you need to get out’. Suck it up, basically and grow a spine.”

After a decade or more dancing for a living, Ansell began branching out. In particular, a gig working on a Glynn Nicholas sketch show inspired her.

“He was writing, performing and producing,” she says. “I thought, ‘Wow! How does your brain compartmentalise so many roles’. I started writing my own material and really enjoying that. Then I was invited to curate a little independent festival and I started to love being on the other side and curating and producing. Then I began getting a lot of phone calls.”

The phone kept ringing and eventually she found herself helming one of the nation’s biggest and most prestigious arts festivals.

Inevitably, with such a high-profile position, there are plenty of critics – armchair or otherwise – waiting to pass judgment on her judgment as festival director.

But the lesson from her father on toughening up as well as the extraordinary discipline acquired from working as a professional dancer have equipped her well.

“You wouldn’t be human if you didn’t have your own doubts and nerves but you need a bit of a thick skin in this role,” she says. “I get opening night nerves just like everybody else but I also like to program for various demographics. I get such joy watching audiences engage with work. I’ve tried to make this year’s program as diverse as possible to speak to as broad an audience as I can.”

She also takes the long view on individual reviews of works she has programmed.

“It’s great to have a review and that opinion of the work but I’ve seen times when one reviewer has given something two or three stars and another has given it five. I’d always encourage audiences to make up their own mind and give the work a chance.

“We also have a habit of homing in on each work mutually exclusively – that work at that time. But I’ve seen people whose work is so radical and out there and people didn’t know how to interpret them. Then, many years later those works become retrospective – that artist is experimenting and on a journey.”

The pandemic in particular has forced Ansell to remain adaptable in her programming choices.

“If you read the literature on pandemics it’s quite possible I will not see a COVID-free festival in my tenure,” she says. “But we’re outdoor, we’re indoor, we’re online … I really feel we are ready for anything.”

She’s also very aware that, after two years of lockdown and uncertainty, audiences are seeking something to lift their mood.

“We want to be responsible for challenging our audiences but we really want to bring some joy and fire imaginations with works that incite hope and a sense of the future.”