Viewers left ‘heartbroken’ as nurse talks to man, 62, who died from coronavirus after beating cancer ‘out of respect’ as he cleans his body – adding it’s a ‘privilege’ to be there because it’s his ‘last moment’

Viewers were left ‘heartbroken’ as a nurse talked to a man 62-year-old man who died from coronavirus after beating cancer ‘out of respect’ as he cleaned his body.

Last night’s episode of Channel 4’s Surviving Covid followed the stories of four patients at London’s King’s College Hospital who had been struck down by Covid-19 – including builder David, 62, from the UK, who was unresponsive.

His childhood sweetheart and wife of 42 years, Gill, refused to believe the worst would happen, but devastatingly, David didn’t make it – and viewers were left with the harrowing image of his body being covered by a shroud by CCU nurse, Douglas Dillard, who said it was a ‘privilege’ to be there in his ‘last moment.’

‘The care given to those on #survivingCOVID AND special shout out to that gentle nurse who bathed and spoke to David every step of the way after his death; is breathtaking. I hope staff get a lifetime of mental health support. This must be so tough on them,’ wrote one.

A second added: ‘The staff nurse who bathed David and spoke to him every step of the way after his peaceful death was just breathtaking, I take my hat of to these amazing people.’ 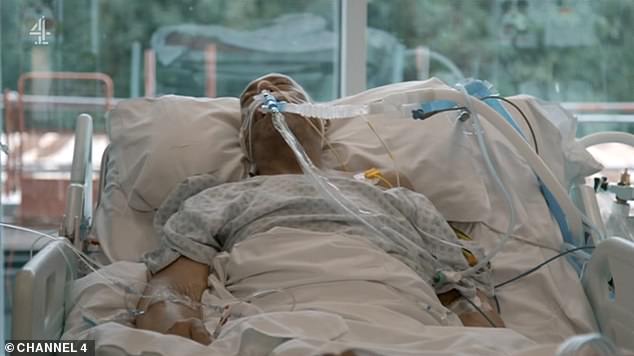 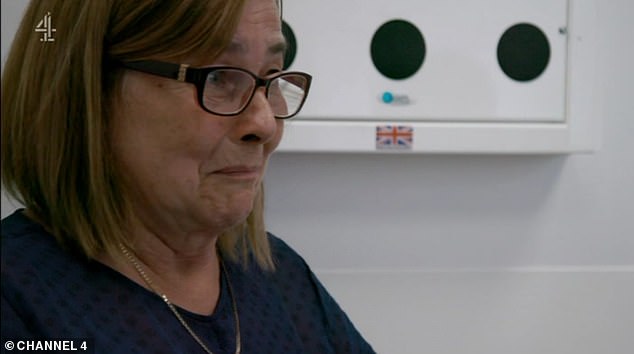 David’s wife and childhood sweetheart Gill (pictured), refused to believe the worst would happen, but devastatingly, her husband didn’t make it 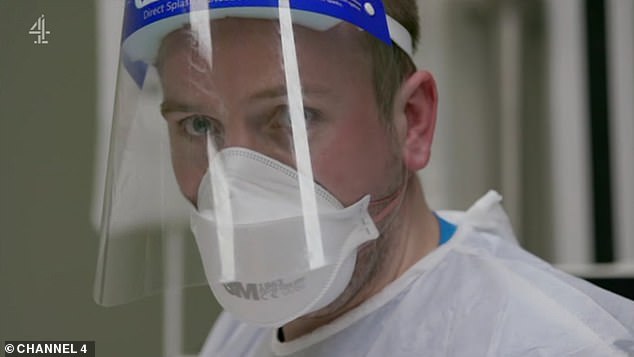 Viewers praised CCU nurse, Douglas Dillard (pictured), who insisted talking to David as if he were still alive to ‘show respect’

The film followed David and his family over a six-month period, revealing a candid look at how devastating the Covid-19 virus can be.

Speaking to the cameras, Gill explained that when they first heard about coronavirus, they thought it was ‘just a made up story.’

But David caught it at the end of January, when his immune system was weakened by previous cancer treatment.

‘He was diagnosed with cancer and we went in 24 January,’ explained Gill. ‘We started the conditioning treatment and the news from that was that he was cancer free.

But he went into hospital with some infections from the bone marrow, which is normal, and that’s when the Covid-19 has hit him hard. We are confident and positive he’s going to come through it.’ 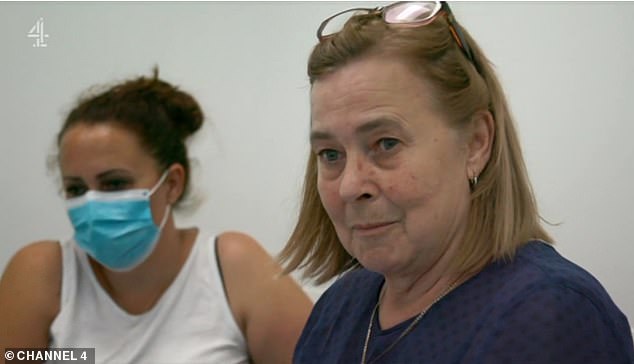 Gill (pictured right, with Kelly, left) explained that when they first heard about coronavirus, they thought it was ‘just a made up story’ 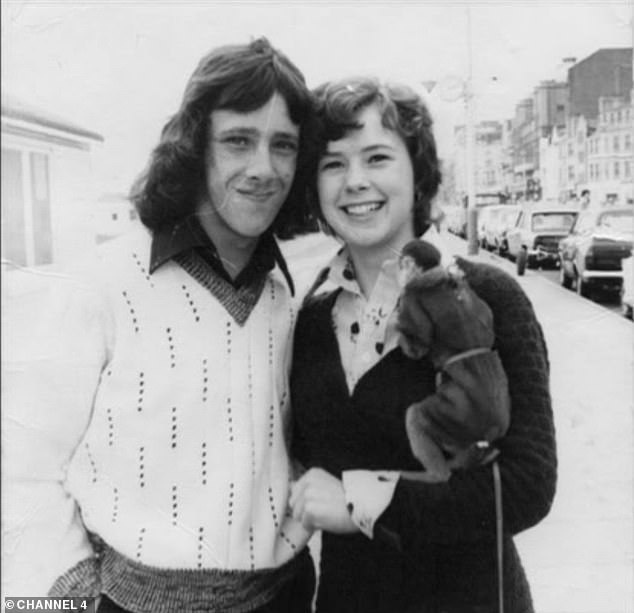 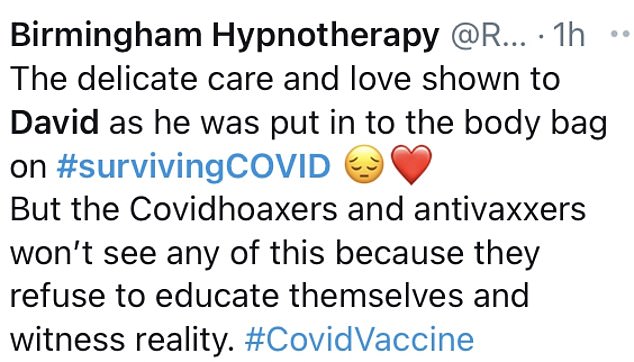 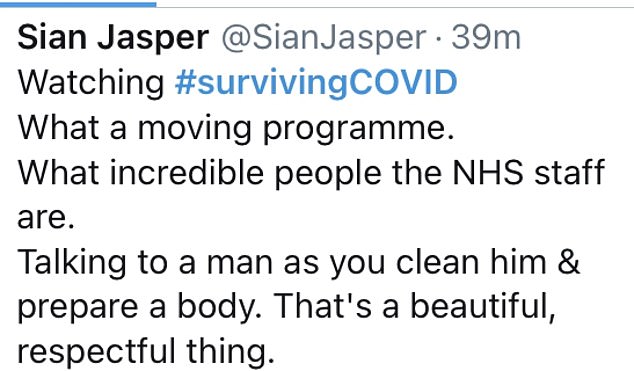 Taking to the comments section, one person penned: ‘The staff nurse who bathed David and spoke to him every step of the way after his peaceful death was just breathtaking’ (pictured)

And daughter Kelly went on to say how she thought being able to visit in person, with full PPE, would help.

‘It’s not a measurable science, is it, unconditional love? But there is a value to it,’ she said.

The childhood sweethearts found that David’s admission to intensive care was the longest period they had been apart for 48 years. 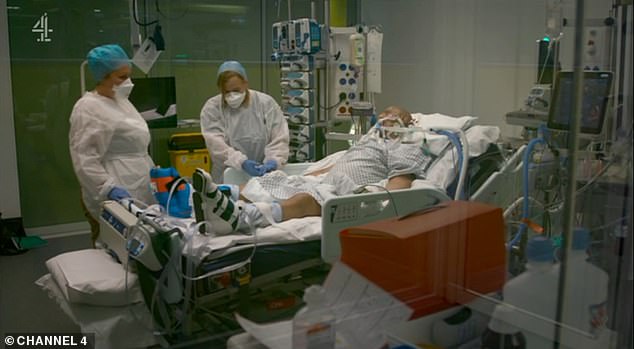 David’s daughter Kelly said how she thought being able to visit in person, with full PPE, would help. Pictured, with David and Gill 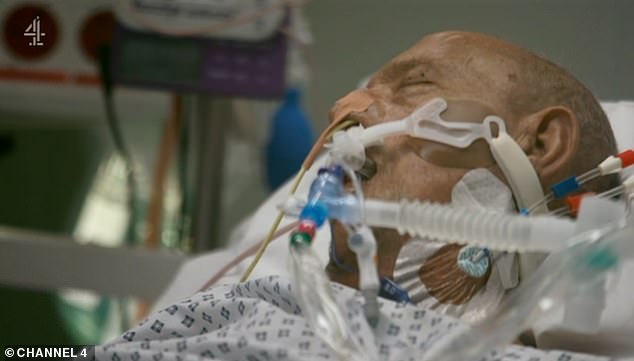 However, tragically David deteriorated and reached ‘the end of what ICU could offer him.’

‘There are lots of little hurdles we’re not quite clearing,’ said Dr Hurst.

After he gently explained David was showing no signs of recovery, she said: ‘I know what they’re trying to say, they have to prepare you. I’m not ready to be prepared yet, because he’s got fight in him.’

Sitting by David’s side as his machines were switched off, Gill told how she couldn’t believe he was gone.

In the next scene, CCU nurse Douglas could be seen cleaning and speaking to David’s body as if he were still alive.

Speaking to David, he said: ‘Right David, I’m just going to take your blanket off there. just going to give you a wee wash. Just drying your neck off there, and your shoulders.’

Douglas told the cameras: ‘I’ve looked after him for the last three shifts in a row. I always used to wash him in the morning. This is what we call last offices. We just treat them like they were there before – there’s no change. We still talk to them just to show respect. I’ve looked after him so much I feel like I know him.’ 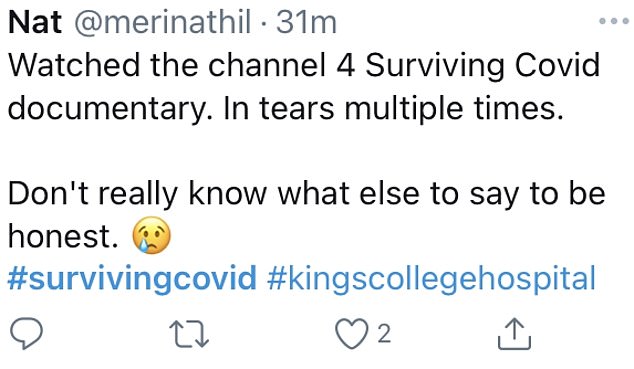 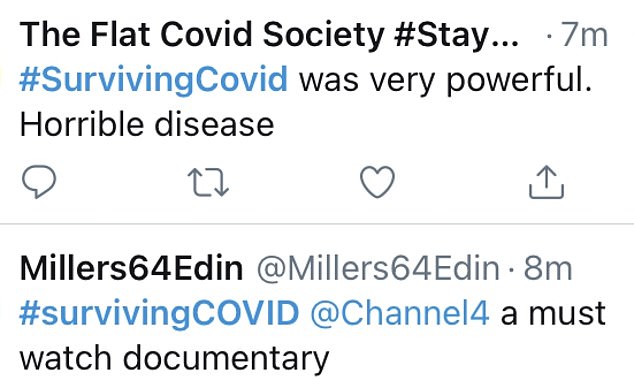 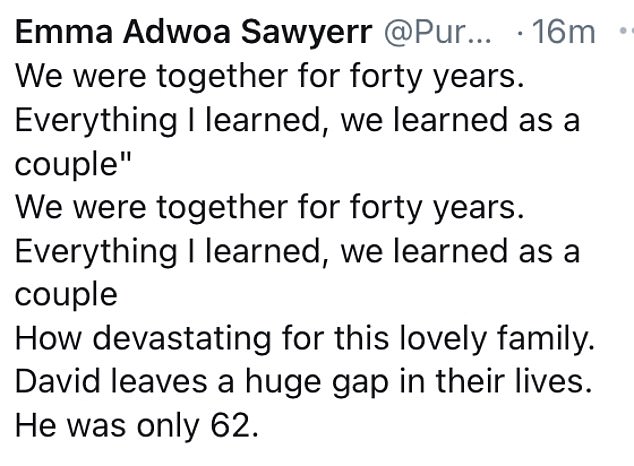 Because of the intensity of the situation, it’s always life and death – so you get to know them really well.

And heartbroken viewers who tuned in were quick to offer David’s family and loved ones their deepest condolences – with one even branding it ‘mandatory viewing’ to warn of the harsh reality of the virus.

‘Surviving Covid on Ch4 is brutal, heartbreaking stuff. I so hoped David would make it,’ wrote one, while a second penned: ‘Each patient and their families having to deal with life-changing, long-term effects. The brilliant NHS staff providing the most dedicated, caring treatment. It should be mandatory viewing.’

A  third added: ‘The delicate care and love shown to David as he was put in to the body bag,’ while a fourth wrote:  ‘#survivingCOVID was so hard to watch, deeply moving, best wishes to all featured, RIP David.’