The court’s action could push New York to reevaluate those restrictions, but it won’t have any immediate impact since the two groups that sued as a result of the restrictions, the Roman Catholic Church and Orthodox Jewish synagogues in Brooklyn and Queens, are no longer subject to them.

The justices split 5-4 to bar the state from enforcing the restrictions against the groups for now, with new Justice Amy Coney Barrett in the majority. It was the conservative’s first publicly discernible vote as a justice. The court’s three liberal justices and Chief Justice John Roberts dissented.

The justices acted on an emergency basis while lawsuits challenging the restrictions continued. In an unsigned order, a majority of the court said the restrictions “single out houses of worship for especially harsh treatment.”

The move was a shift for the court. Earlier in this year, when Barrett’s liberal predecessor, Justice Ruth Bader Ginsburg, was on the court, the justices divided 5-4 to leave in place pandemic-related capacity restrictions affecting churches in California and Nevada.

The court’s action was a victory for the Roman Catholic Church and Orthodox Jewish synagogues that had sued to challenge state restrictions announced by Gov. Andrew Cuomo on Oct. 6.

The Diocese of Brooklyn, which covers Brooklyn and Queens, argued houses of worship were being unfairly singled out by the governor’s executive order. It noted that in red zones, businesses deemed “essential,” from grocery stores to pet shops, can remain open without capacity limits, though “non-essential” businesses had to close. And in orange zones, most businesses can open without capacity restrictions. 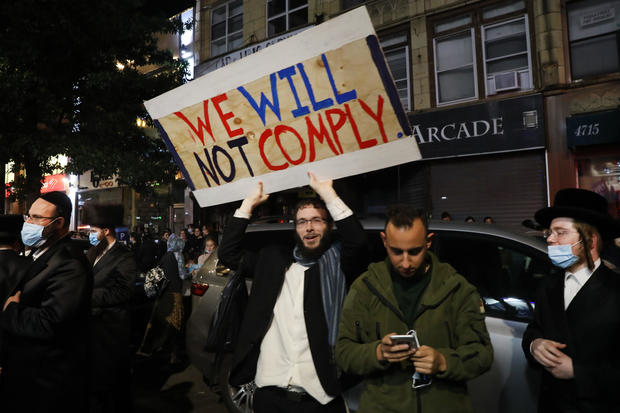 New York, for its part, told the court that religious gatherings were being treated less restrictively than secular gatherings that carried the same infection risk, like concerts and theatrical performances, which were prohibited entirely.

Two lower courts had sided with New York in allowing the restrictions on houses of worship to stand. There are currently several areas statewide designated orange zones but no red zones, according to the state’s website that tracks areas designated hot spots.