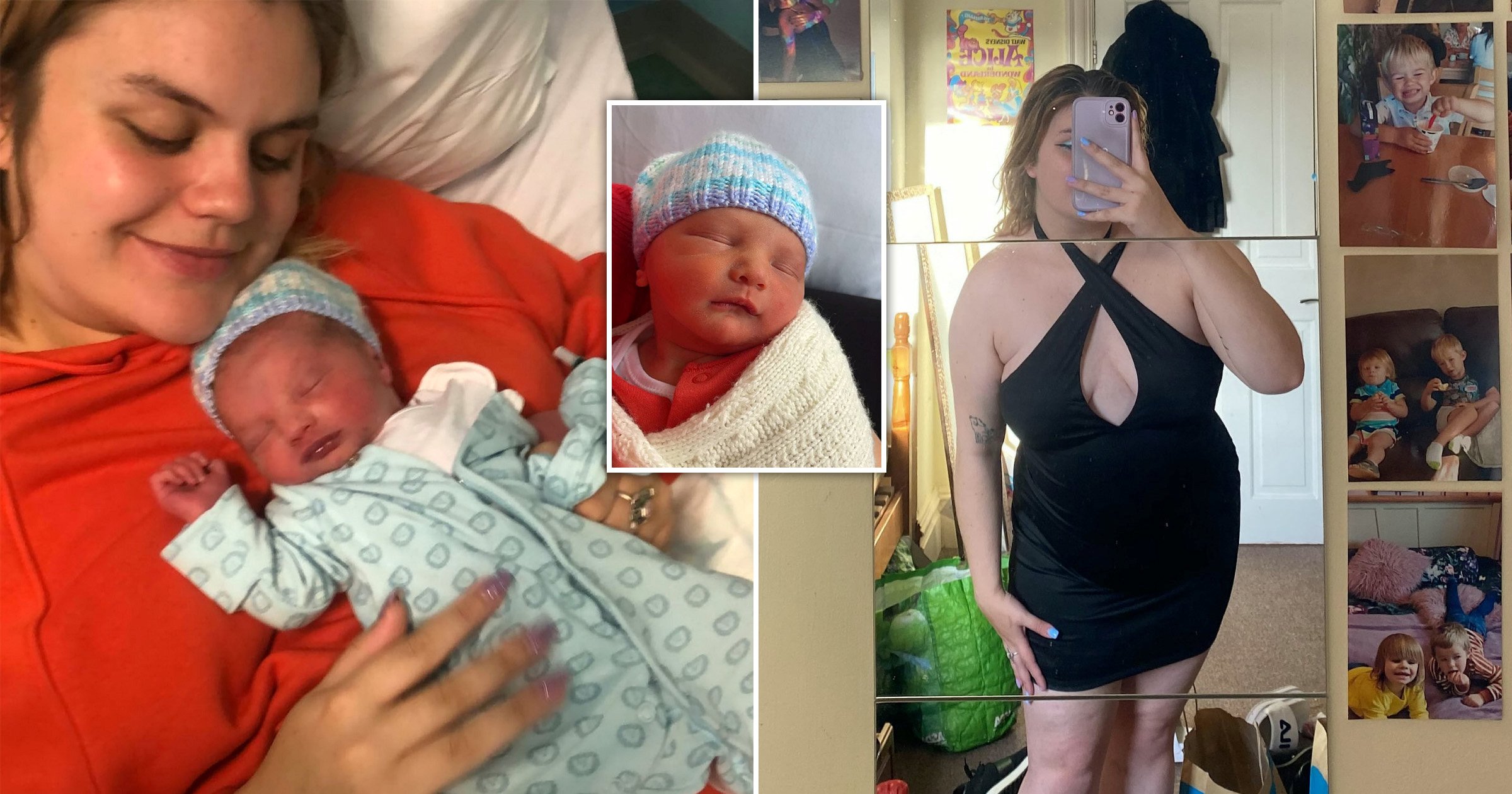 A university student was completely stunned after giving birth when she went to the toilet – having had no idea she was pregnant.

Jess Davis – who turned 20 the day after her shock delivery – had assumed her abdominal pains were due to her period.

The history and politics student from Bristol had no obvious pregnancy symptoms and didn’t have a baby bump. Her periods had always been irregular, so she didn’t notice that she hadn’t had one for a while.

Jess is now getting used to motherhood after welcoming son, Freddie Oliver Davis, into the world on June 11 at 4:45pm, weighing 5lbs 5oz.

The new mum, who is currently in her second year at the University of Southampton, says: ‘I sometimes felt nauseas, but I had started taking a new prescription so I just put it down to my new medication.

‘When he was born it was the biggest shock of my life – I thought I was dreaming at first. I didn’t realise what had happened until I heard him cry.

‘It suddenly hit me that I really need to grow up now!’

At first, Jess says she was completely shocked – which is understandable.

‘It took a little while to get over the initial shock and adjust and bond with him, but now I’m over the moon,’ she explains. ‘He is the most chilled baby ever. He’s known as the quiet baby on the ward.’

When Jess woke up in severe pain in June 2022, she assumed it was the start of her period and walked to her local Asda to buy a hot water bottle.

‘I could barely walk and couldn’t even lie down on my bed when I got home,’ she says.

‘I was supposed to be having a house party that night for my birthday the next day, so I had a shower and a bath to try and make myself feel better, but the pain just got worse and worse’

Jess claims she suddenly felt an overwhelming need to go to the toilet, so sat down and started to push.

‘At no point did I think I was giving birth – I just knew I needed to push,’ she explains.

‘At one point I felt tearing, but I didn’t know what it was. I just knew I needed to get it out.

‘Hearing him cry and realising what had actually happened was just so surreal.’

Unsure what to do, Jess, who was home alone, rang best friend Liv King, the inspiration behind Freddie’s middle name ‘Oliver’.

Despite initially thinking that Jess was making an elaborate excuse to get out of the upcoming night out, Liv quickly advised her to call an ambulance after Jess sent a photo of her newborn son to prove it wasn’t a prank.

Jess was taken to Princess Anne Hospital, Southampton, where baby Freddie was rushed away to be put in an incubator.

The doctors predict that he arrived at 35 weeks but despite his dramatic entrance to the world, both Freddie and Jess are recovering well.

The news of Freddie’s arrival was broken to Jess’s mum by Liv, who phoned her and asked, ‘Are you sitting down?’

Luckily, Jess’s mum was supportive and is excited to become a grandmother.

‘My mum is the best person in the world, she’s been so supportive and she’s over the moon to be a grandma!’ Jess adds.

‘Being a mum is a huge life change, but it feels natural. The love I have for Freddie is hard to explain, but it’s incredible. I just think about him all the time.’

Now, Jess is moving to a local university to continue her studies so she can be closer to home, which will make childcare easier.

She says: ‘I’m looking forward to watching him grow up and be there for him every step of the way.’