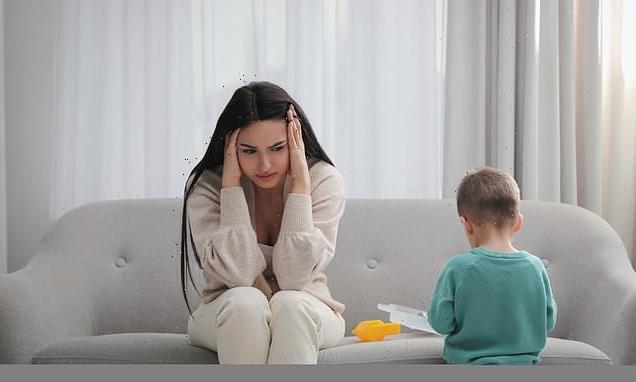 ‘I’m starting to even question if I love my son’: Exhausted mother whose toddler’s tantrums ‘trigger something awful in her’ asks if she’d be better off leaving so he can live with his father

A mother has opened up about her struggles with parenting, asking whether she should leave her family so her young son can just live with his father.

The woman, whose son is nearly two, discussed the topic on the British parenting forum Mumsnet.

In her post, she revealed that she thought that she would have adapted to life as a mother by now, but that her son has started having horrific tantrums that sometimes make her question whether she even loves him.

With her schedule of working 8am-5pm four days a week, as well as being the child’s primary caregiver, she said her days feel ‘stressful and rushed’, and she’s ‘not enjoying life right now’. 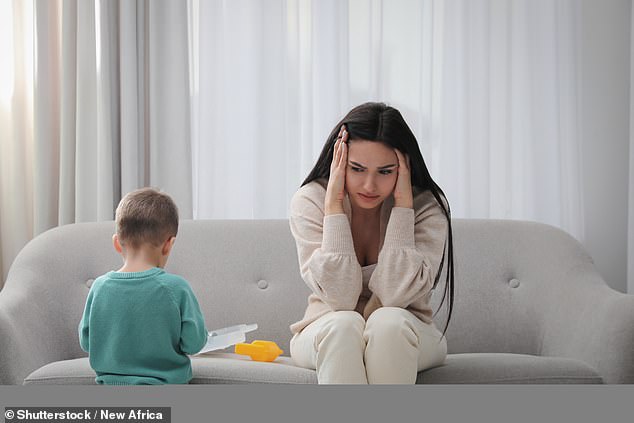 A mother – believed to be based in the UK – has opened up about her parenting struggles, and how her toddler’s tantrums sometimes make her dislike him (stock image) 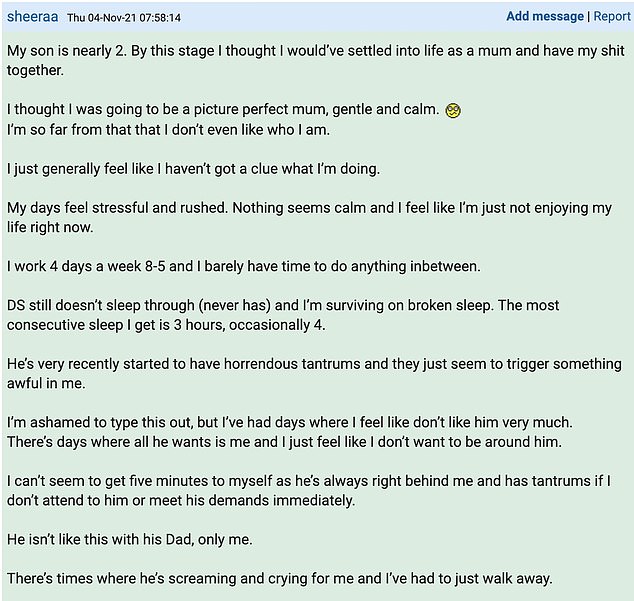 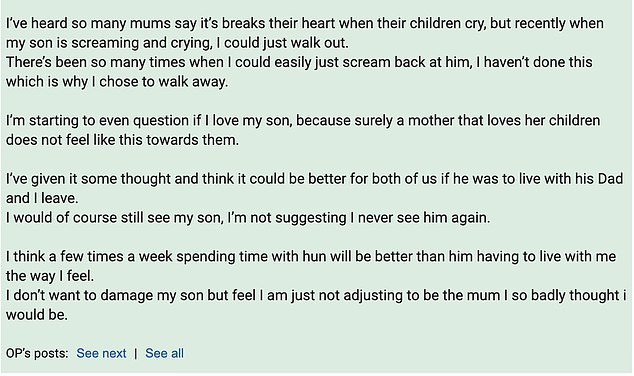 Working almost full time, and being a primary caregiver has resulted in the mother’s days feeling ‘stressful and rushed’, with her ‘not enjoying’ her life

The exhausted mother said that her son has never slept through the night, and that the most consecutive sleep she ever gets it three hours.

Then during the day, he constantly demands her attention and has tantrums if she doesn’t respond immediately.

She concluded her post, saying: ‘I’ve given it some thought and think it could be better for both of us if he was to live with his Dad and I leave.

‘I would of course still see my son, I’m not suggesting I never see him again.

‘I think a few times a week spending time with him will be better than him having to live with me the way I feel.

‘I don’t want to damage my son, but feel I am just not adjusting to be the mum I so badly thought I would be.’

The responses to the post were almost universally supportive – with other parents opening up and sharing their own struggles with looking after young children.

Some of the respondents thought the poster may have post natal depression, with a few opening up about their own experiences with the condition

A number of respondents thought the poster may have Post Natal Depression (PND), with one writing: ‘When I had similar feelings with my firstborn I had crippling PND, I was so sure I was just not supposed to be a mum and in total denial it could be PND.

‘I got help and now could not imagine my life for one second without my little boy, and my newborn. Get help, even if you think you don’t need it, you really might.’

Another added: ‘I also think this could be unresolved PND and you should speak to your GP about whether you decide to leave or not. Then think about a sleep specialist if you can afford it. Might not be too expensive and can be worth it for your mental health.’

A third wrote: ‘Sounds like PND, I was the same I used to tell my husband all the time she was better off with him and if I left! I didn’t get anywhere with my GP, but my health visitor was amazing!’

However, others revealed that they go through phases of not liking their children – and in fact consider it to be a normal part of parenting.

Others admitted that they too have sometimes disliked their own children, with some feeling guilty about it, and others saying it’s a totally normal feeling

One said: ‘This was me during half term and my son is 7 ! Love him to bits but there were a couple of occasions when I didn’t like him!

‘Totally normal, but the sleeping thing needs to be addressed. Once that is sorted you’ll feel so much more able to cope.’

Another was more explicit, saying: ‘And two year olds are generally a********. Unrelenting dictators. You are NOT alone.’

A further poster agreed, writing: ‘The toddler years are hard. Does your dp [darling partner] help? It sounds as if you need him to step up.’

For most of the respondents, the main issue was sleep deprivation – with a number of commentators branding it ‘torture’, and saying that if the mother could get some rest, should would likely feel more positive. 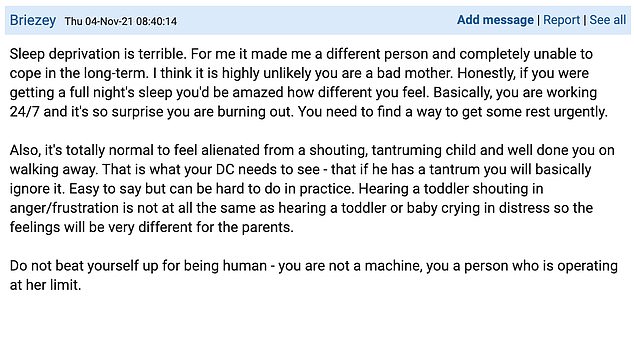 Numerous forum users discussed how sleep deprivation is torture, and that given the poster’s schedule and lack of sleep, the way she feels about her son is unsurprising

One Mumsnetter said: ‘You need a break. Do you have parents who could have him for a weekend? Could your partner look after him whilst you go away and have a break for a weekend? It’s relentless and exhausting. You need to ask others to help you out.’

Another added: ‘I don’t think it’s PND. I think you’re absolutely worn out. No one can think straight and act rationally on so little sleep. I often think that if new mums were able to sleep more, there’d be far fewer cases of PND diagnosed. Get his dad to have him this weekend, you go to a hotel and just SLEEP. No one will be harmed, you’ll start to feel like your old self and things will feel easier all round.’

A further poster wrote: ‘Also being prevented from sleeping is actually used as a means of torture, so no wonder it drives you to despair.’