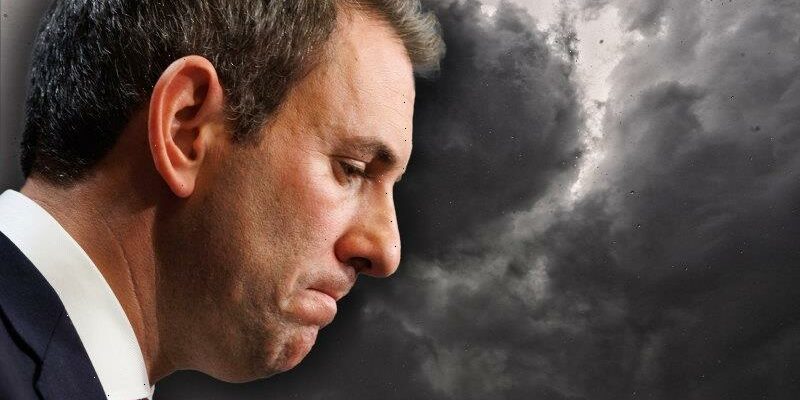 The economic and fiscal environment we face today is not just different to the picture painted in the March budget. It’s as if we are on another planet.

Treasurer Jim Chalmers sounded more like a meteorologist than a politician when this week he sought to explain the issues affecting his first budget.

“The storm clouds are gathering again in the global economy,” he said in a press conference called after the Reserve Bank lifted official interest rates to a nine-year high. 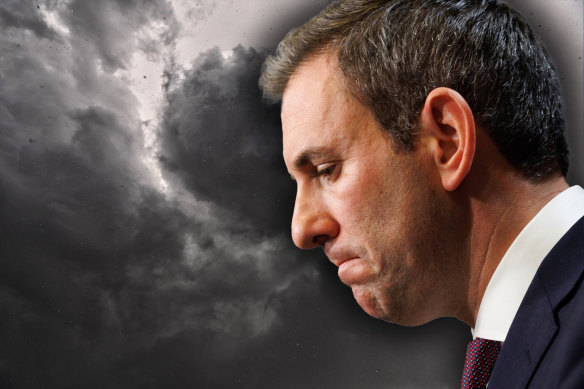 Jim Chalmers in the eye of the stormCredit:Nick Moir / Alex Ellinghausen

Twice more he referenced the dark clouds that threatened his budget, blowing in from the United States, from China, from Ukraine, from the EU and from Britain.

At the Reserve Bank headquarters in Sydney, bank governor Philip Lowe took the storm warning to its logical end, saying the RBA was intent on “keeping the economy on an even keel”.

That the two men who will have the biggest say about the state of the Australian economy used related metaphors highlights the difficult conditions the world’s policymakers now face.

Another time, another planet

Chalmers will deliver his first budget on October 25, a re-do of the effort produced for the 2022-23 financial year in late March by then treasurer Josh Frydenberg.

That early budget was set down in a markedly different economic environment. Russia had invaded Ukraine but the surge in commodity prices that has fed into global inflation had yet to materialise.

The US Federal Reserve had increased interest rates for the first time in two years, taking its key rate indicator from 0.25 per cent to 0.5 per cent. The Reserve Bank still had the cash rate at 0.1 per cent.

Treasury was forecasting inflation to peak around 4.25 per cent with real wages tipped to grow in 2022-23.

Today, inflation is expected to reach 7.75 per cent by year’s end. Real wages are forecast by Treasury to continue falling throughout the next financial year.

The Reserve Bank is in the midst of the most aggressive tightening of monetary policy since 1994 with the cash rate at 2.6 per cent and forecast to go higher by Christmas. 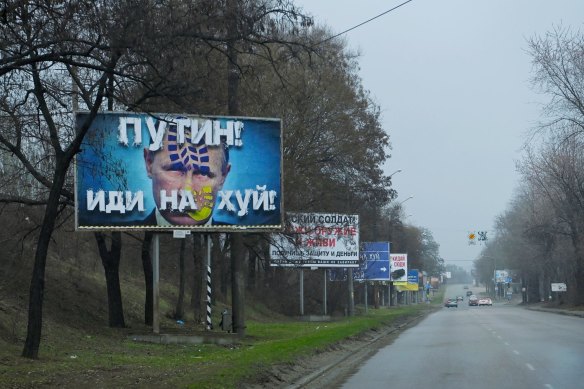 The Russia-Ukraine war had begun when the March budget was launched, but the economic impact has only worsened since then. Credit:Kate Geraghty

The Federal Reserve has interest rates in the US at between 3 and 3.25 per cent with markets expecting them to top 4.6 per cent by the end of next year.

Respected economic historian Adam Tooze this week noted that we are now “in the midst of the most comprehensive tightening of monetary policy the world has seen”.

While higher interest rates could drive down inflation, Tooze said there was also the risk of economic disaster.

“We are courting the risk of a global recession that at its worst could bring down housing markets, bankrupt businesses and states and throw hundreds of millions of people worldwide into unemployment and distress,” he said.

The economic and fiscal environment is not just different to the picture painted in the March budget. It’s as if we are on another planet.

The immediate problem is one to be dealt with by the new government.

Chalmers and Finance Minister Katy Gallagher have to squeeze approximately $2.4 billion worth of Labor’s various election promises into the budget this financial year, navigate economic parameters vastly different to those charted by Frydenberg, worry about a global downturn while laying the foundations of a series of structural changes to the nation’s finances. 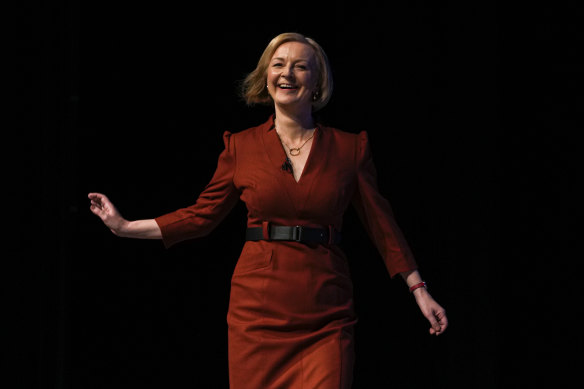 The politics of the budget have taken a turn over the past fortnight after Britain’s prime minister Liz Truss and her mini-budget almost brought the world’s sixth-largest economy to its knees.

Truss’ plan to slash the 45 per cent tax rate to 40 per cent for people earning more than £150,000 swung the focus in Australia back on the stage three tax cuts – due to start in mid-2024 – that were announced by then treasurer Scott Morrison in 2018.

Opponents to the tax cuts, including some within the government, used the political and economic disaster inflicted on Truss to ramp up their attacks.

Key differences between them were ignored.

Less than 2 per cent of Britons would benefit from the abandoned Truss plan. Australia’s stage three tax cut package will affect seven in 10 taxpayers, albeit with the largest benefits flowing to higher income earners.

One of the reasons for the harsh financial market response to Truss’ tax plan was the state of the British budget. UK government gross debt is about 100 per cent of GDP (in Australia it’s closer to 42 per cent).

The British budget deficit, three times that of Australia’s deficit, will get larger.

The stage three tax cuts have been incorporated into the Australian budget’s long-term forecasts.

Not that Australia is without budget problems.

They are tipping a deficit this year of between $35 billion and $40 billion. Next financial year, they reckon the deficit will increase to between $55 billion and $60 billion with deficits of a similar size in the two years beyond that.

The debate about tax cuts that won’t hit bank accounts for almost two years has clouded the more immediate issues facing the economy.

The Reserve Bank’s six consecutive interest rate rise means the cash rate has jumped by 2.5 percentage points since May. On a $750,000 mortgage, that’s a cumulative $1030 in monthly repayments.

Lowe and the bank are watching carefully two areas – the global economy and how Australian households are responding to the lift in interest rates.

The surge in house prices led to the biggest ever increase in household asset holdings. The ratio of housing assets to income reached 6.5 to 1 in March. But that has turned, falling through the June quarter (as almost half a trillion dollars was wiped from Australians’ net worth).

Even though interest rates are still historically low, they have never been increased so quickly on a population of mortgagors carrying so much debt. The economic repercussions are clearly unknown.

The Reserve Bank, according to some critics, has been too slow lifting rates to deal with inflation. Across the Tasman, the Reserve Bank of New Zealand this week took interest rates up another 0.5 percentage point to 3.5 per cent.

But there are some analysts who believe central banks might be loosening monetary policy this time next year to deal with the economic slowdown they helped create. 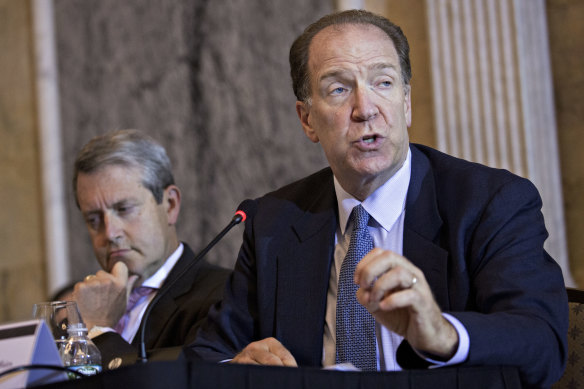 “For many countries, recession will be hard to avoid”: World Bank chief David Malpass is pessimistic about the state of the global economy.Credit:Bloomberg

Financial markets put the chance of a US recession by mid-2023 at about one-in-four. In Britain and across the eurozone, the chances are closer to 75 per cent.

Less than a month ago, Lowe used testimony to a parliamentary committee to focus attention on the state of the budget and the state of policy debate in this country.

Lowe noted that despite the highest terms of trade on record and a jobless rate at a 48-year low, the budget was still forecast to remain in deficit.

He said governments of all persuasions had consistently failed to deal with the growing demands of the community for high-quality services and infrastructure. They had also failed to find ways to pay for those demands.

Tax increases, spending cuts and economic reforms had to be on the agenda.

“Each of those are very difficult. Taxes, cutting back and structural reform. We have to do one of those three things, maybe all three of them,” he said.

Chalmers is more than willing to contemplate tax reform, saying there needs to be a “big national conversation” about the budget’s structural position and how it will continue to fund important government services.

He said it should not be a debate about whether we should have these cuts, but how tax reform drives economic growth.

“There is real question about the purpose of tax cuts and tax reform and this must be conducted in the light of the big structural issues we face,” he said.

“There is a deep question about size of government; what government actually does; the role of the tax system in incentivising and raising revenue efficiently.”

His argument is similar to that put by new independent MP for the Sydney seat of Wentworth, Allegra Spender, who used an address this week to note the dearth of real debate around tax and the economy. 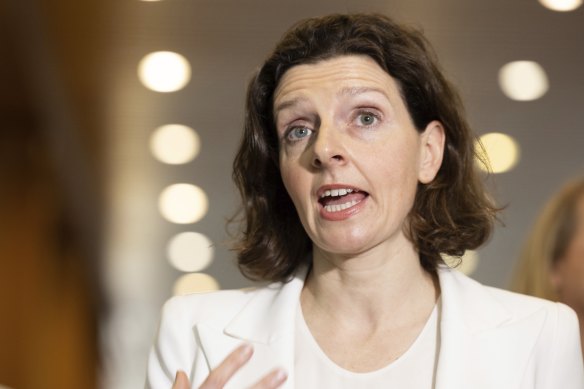 Independent Allegra Spender says a proper debate about tax and the provision of quality government services is required.Credit:Alex Ellinghausen

“Despite these challenges, our public debate is often unhelpful. One side calls for higher taxes – and the other side calls for lower spending. There is seldom any real discussion about the quality of our fiscal programmes. And that public neglect has led to policy neglect.”

While a full-throated tax and budget priority debate is yet to begin, a more immediate issue is where both the federal government and the Reserve Bank hope to land the economy.

New PwC chief economist Amy Auster says it is important that budget and monetary policy work in the same direction.

She notes that while government spending reached a high of almost 32 per cent of GDP during the depths of the pandemic, it is now starting to repair as certain COVID-related programs finish up.

While spending is still elevated – around 26 per cent of GDP – it could be reduced gently rather than through a rush of expenditure cuts that would cause broader economic problems.

“We still have a lot of fiscal resilience. We don’t have a fiscal emergency,” she said.

“The important thing is to make sure fiscal and monetary policy aren’t working against each other. ”

By Friday, as the east coast endured more rain, Chalmers was back in the weather business, using a speech in Brisbane to again warn of the “coming economic storm”.

This storm, he said, was being caused by the global inflation shock and a possible hard economic landing caused by rapidly increasing official interest rates. Treasury has knocked down global growth by $US2 trillion over the next two years.

If the storm hits, it would be the third major global economic crisis in the past 15 years.

Budgets, and central banks, had not properly recovered from the global financial crisis when they ran into the COVID pandemic. Now, with inflation high, central banks could end up creating even more long-term troubles.

No one is prepared to predict when these latest clouds will clear. 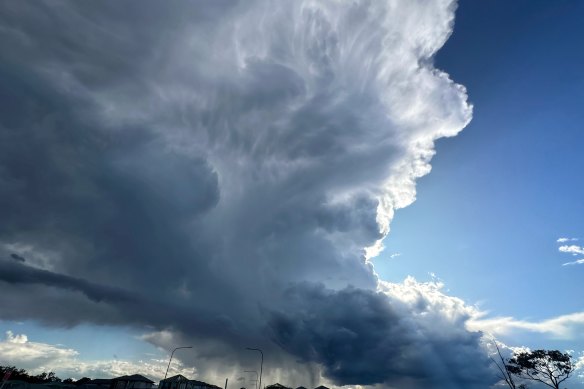 Economists are reluctant to predict when we will see the end of the financial gloom. Credit:Nick Moir