The big change comes on the heels of Batiste picking up a leading five Grammy Awards in April, including album of the year for "We Are."

There’s a big change at “The Late Show,” with Stephen Colbert having to make the announcement without a huge sendoff.

Unfortunately, Jon Batiste wasn’t at the taping of Thursday night’s episode or he would have been able to be there for his last episode. “Jon has decided to leave the show,” Colbert said of the bandleader who’d been with him since he took over as host in 2015. 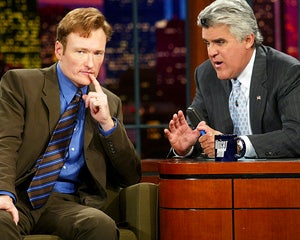 “But it’s for all the best reasons, including to continue sharing his art with the world,” Colbert continued. He went on to praise his friend and colleague, adding, “We have been so lucky to have a front row seat to Jon’s incredible talent for the past seven years.”

“But we’re happy for you, Jon, and I cant wait to have you back on as a guest with your next hit record,” Colbert continued. “I love you.”

And when he does come back, Colbert could always give Batiste a belated sendoff.

With Batiste’s departure comes change, and yet not change. Already busy this summer, Louis Cato has been filling in for the absent bandleader. Now, with an official change of name to Louis Cato and the Late Show Band, Cato is officially the show’s new bandleader. 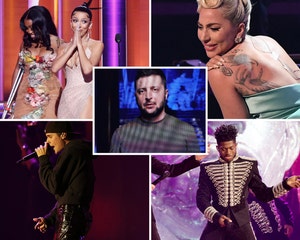 2022 Grammy Awards: The Most Viral Moments of the Night

Batiste’s decision to step away from the show comes on the heels of his biggest night yet. Back in April, he enjoyed an epic night at the Grammys, picking up five trophies, including album of the year for “We Are.”

He’s also scored an Oscar (and another Grammy) for his work as co-composer alongside Trent Reznor and Atticus Ross on Pixar’s 2020 film “Soul.” With this big shift in focus, Batiste is free to pour more of his time and energy into his music.

Since the first day of Colbert’s tenure as host of “The Late Show,” Batiste was seen smiling and laughing from the piano with the band. Even when Colbert took his show’s home during the Covid lockdowns, Batiste was still a regular part of the broadcast, joining in via video chat.