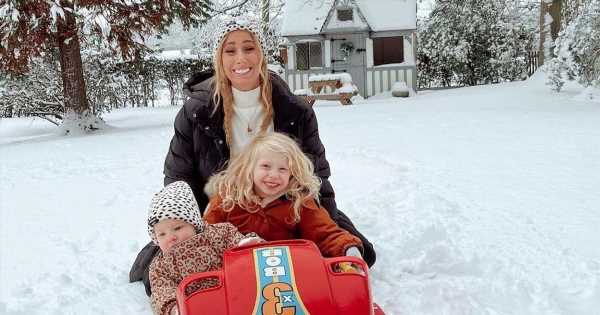 Christmas appears to have come two weeks early for Stacey Solomon and her young family, as Pickle Cottage experienced its first snow of the season in what proved to be a very special milestone for daughter Rose.

The adorable one year old experienced snow for the very first time on Monday, as several inches the white stuff coated the £1.2million home shared by Stacey and husband Joe Swash.

Taking to Instagram document the moment, Stacey could be seen flashing her trademark smile as both Rose and older brother Rex, 3, got to grips with the frosted offering.

Wrapped up warm for the occasion, Rose could be seen sporting a Dalmatian print hat by brand Another Fox, as she beat the chill in an adorable animal print snowsuit and cream mittens.

Wide eyed with joy at the sight of the snowy addition to her garden, Rose appeared to be loving every minute as she and Rex got stuck into a spot of sledding with Stacey at the helm.

For his own snowbound outfit, Rex opted for a burnt orange jumpsuit and fleecy hoodie as he cheekily posed with a snowball in hand alongside his mum and sister.

Stacey also made sure to dress appropriately for the dwindling temperatures, as she opted for a padded brown puffer jacket, leggings, snow boots and an oversized patterned reindeer jumper.

Alongside the collection of images, Stacey told her fans that it was like “Narnia” as she likened it to the snowy world from the C.S.Lewis classic The Lion, The Witch and the Wardrobe.

“The First Snow At Pickle Cottage & Rose’s first ever snow. We woke up to what seemed like Narnia outside the window and the kids have never been so excited,” she wrote to her 5.4 million followers.

Explaining how she and the kids had spent their snow day, Stacey continued: “Our roads hadn’t gotten round to being gritted so all school & work was snowed off! So we made the most of a very very rare snow day & spent all day in Joes childhood sleigh that he has had since he was 10, making snow angels & having snowball fights.”

The star also went on to admit that one of the reasons it was so special, was because nobody had predicted such a blanketing of white.

She concluded: “It was such a special day that none of us new was coming. Happy Monday everyone… Hope you’re ok, and not too snowed in! Lots and lots of love from all of us”