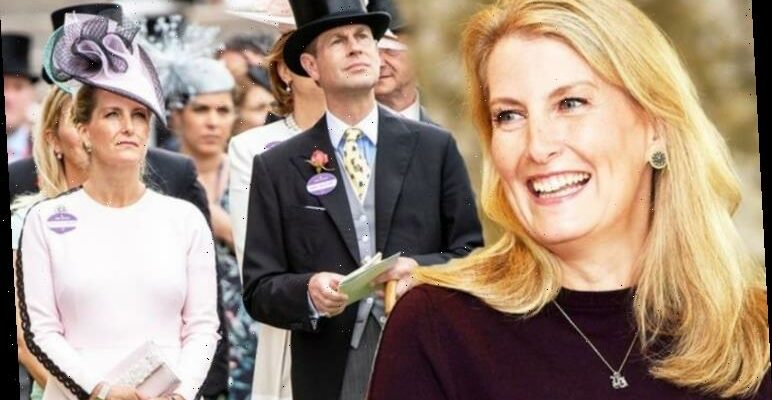 Sophie, Countess of Wessex and Prince Edward tied the knot at Windsor Castle on June 19, 1999. Since then, they have both had working roles within the Royal Family.

Prince Edward has more experience in the public eye and is the youngest child of Queen Elizabeth II, 94, and Prince Philip, 99.

While he is more familiar with royal life, body language expert Judi James suggested Sophie has grown in confidence.

Sophie swapped her career in public relations for a role working in the Royal Family after the wedding.

When the two royals have attended events together, the expert claimed the Countess of Wessex has “led the way”.

She explained this dynamic in their relationship could be seen as far back as their engagement photo call in 1999.

“Sophie’s superior levels of confidence and perhaps life experience showed here but the duo looked as though they shared the same goals and thinking,” Judi said.

“The way Sophie holds onto Edward’s arm suggested she would be his anchor in life.”

Commenting on the couple attending Royal Ascot, before the coronavirus crisis, Judi said Prince Edward positioned himself so Sophie could take the attention.

She continued: “Sophie’s body language suggests no active desire to scene-steal here as she stands with one knee bent in and some modestly-placed hand gestures.

“Again it’s Edward who seems happy to suppress his own royal status to make her the focus of his attention.

“The way he face-watches his wife suggests she’s not only the centre of his attention, she’s also the one he is amused by and takes his lead from.”

Like many members of the Royal Family, Sophie and Prince Edward have continued to make appearances with the help of video calls.

The Countess has made many virtual calls by herself and may be more comfortable being “socially active”, Judi continued.

The expert explained Prince Edward is happy to take a step back while Sophie takes control in public outings.

She added: “Edward’s non-verbal signals suggest he’s happily moved into a more low-key role in public, while Sophie’s confidence signals show her as being the more socially active one in the team dynamic.

“Prince Edward looks delighted to stand by his wife using glances of admiration and pride.”

While they have taken different approaches to their royal roles, Judi claimed the dynamic has worked for them.

The couple still shows “strong bonds of affection” after being married for more than 20 years.