“Do I really have to say? I’ve opened doors!”

Sofia Vergara is the latest celebrity to be put in the hot seat by Ellen DeGeneres for a round of “Burning Questions” — and her answers did not disappoint.

On Thursday’s episode of “The Ellen DeGeneres Show,” the “Modern Family” star participated in the daytime talk show segment, in which Ellen simply asks a celebrity a series of “burning” questions. The star must then answer the question and press the big red button in front of them.

During her round of the game, Vergara was asked a wide range of questions, such as the one thing she’s tried that she’ll never try again, what her husband Joe Manganiello makes fun of her for and what her hidden talent is. 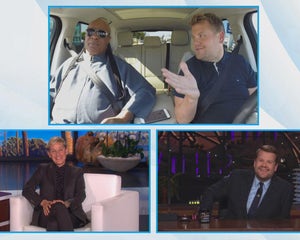 However, the best part came at the end when the 48-year-old actress answered the final question — and gave an absolutely hilarious response.

“What body part are you most proud of?” Ellen asked, to which Vergara immediately replied, “I mean, please, Ellen.”

Ellen and her audience erupted into laughter. “Oh, my God, I love you,” Ellen said.

“Do I really have to say?” Vergara asked, before jokingly adding, “I’ve opened doors!”

Since the “Chef” star forgot to press the red button when she answered the question, she asked Ellen if they could do it again.

However, when Ellen then proceeded to ask Vergara the same question, Vergara didn’t change her answer at all, making the moment even more humorous.

Watch it all go down in the video, above!

Meanwhile, also during her appearance on “The Ellen DeGeneres Show,” the “Hot Pursuit” star spoke to Ellen about how she’s often photographed by paparazzi while she’s eating.

“Well, first of all, I didn’t know I was doing that — I didn’t know I had a problem until people started posting pictures of me of paparazzi, eating,” Vergara said after Ellen showed a few of the photos. “And then I started to realize like, ‘What is wrong with me?'”

“But you have to give it to me that I’m always long hours, on a set,” she continued. “You get bored, you get a little anxious. And what else are you going to do?”

Fortunately, the star said she has a “technique” that makes it so she can eat while not ruining her lipstick.

See what it is in the full clip, below.