Four significant trees will be felled to make way for a mansion on one of Toorak's most exclusive streets because they clash with the design for a new family home and gardens.

Stonnington councillors on Monday vetoed a recommendation to protect the trees, despite officers' concerns about more than 1000 established trees being cut down on private land every year. 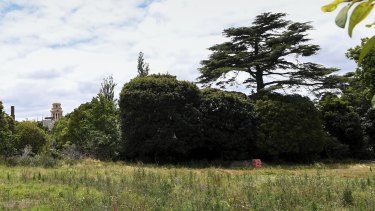 Four significant trees will be bulldozed on this St George’s Rd Toorak property against the advice of the Stonnington Council officers.Credit:Penny Stephens

The mansion, tennis court and swimming pool at 18 St Georges Road sold for $38 million in 2018 but was pulled down after a fire and vandalism at the vacant property.

Plans to rebuild on the 5000-square-metre lot hit a snag when Stonnington Council officers refused to allow removal of three magenta cherry trees and one Lebanon cedar on the edge of the property. The trees range from eight to 18 metres tall. 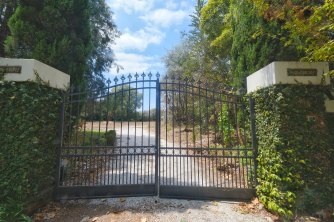 The gates of Mowbray remain after an almost $40 million mansion was knocked down in Toorak.Credit:Luis Enrique Ascui

In an appeal brought to councillors on Monday, council officers advised them to reject the permit because healthy and established significant trees should not be felled without a compelling reason.

The loss of more than 1000 trees a year on private land was taking a toll on the municipality, officers warned. "Over time, this will erode the extent of tree canopy cover over the city, diminish the positive values that trees provide in an urban landscape and increase exposure to urban heat island effect," their report said.

However, a motion approving removal of the trees put forward by councillor Matthew Koce passed with a majority.

There are no plans to subdivide the land and the owner intends to live in the mansion, which is expected to take up about 1300 square metres of the site. A pin oak in the centre of the property will be retained. 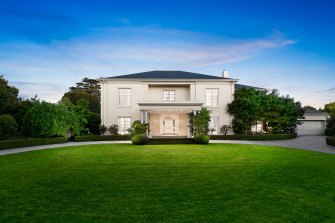 The former Mowbray mansion at 18 St Georges Road in Toorak.

"The appeal reiterated the intention of the property owner to construct a new house and garden and that the trees were incompatible with the proposed design," the council report said.

The property is owned Qi Yang, and construction on the new home is expected to begin in January. Building works had to begin quickly under a Foreign Investment Review Board ruling, requiring an immediate council decision.

Councillor Alexander Lew, who voted to save the trees, pointed out that the three magenta cherry trees (also known as lilly pillies) were endangered in NSW and listed as vulnerable nationally.

But Cr Koce said the trees were not native to Toorak.

His alternative motion to provide a permit for removal of the trees requires two trees to be planted for every tree removed.

The garden design proposes planting more than 300 trees and shrubs. "For me, the key thing was we're actually going to get a better outcome for the community," Cr Koce said.

The motion also requires the new development to be a single dwelling, for each replacement tree to be about 2.5 metres tall, and for the trees to remain for at least 10 years.

Cr Lew said there was no way to properly enforce the terms of the alternative motion and that prosecution was rare.

Councillor Marcia Griffin said she could not understand why the four trees on the boundary of the massive property needed to be felled in order to build a new home. "This is really something of great concern to me. We've seen a lot of destruction of the environment in this area," she told Monday's meeting.

Ratepayers Victoria and Ratepayers Stonnington president Dean Hurlston said the advice of council officers should have been followed.

His comments were echoed by Ilona Komesaroff, of the Toorak Residents Group, who said established trees helped form Toorak's character and should be protected from development.

Toorak Village Residents Action Group president Eddie Young, though, supported removal of the trees because the proposal meant the land would not be resold and redeveloped into apartments. "To have someone who wants to build a single residence is a prayer come true."

Design consultant Lorraine Bochsler, who appealed on behalf of the owner, said there may have been unfair and anti-Chinese assumptions about the owner’s intentions. "The idea is to create exactly what we understand is the best outcome for St Georges Road."

At the end of each day, we’ll send you the most important breaking news headlines, evening entertainment ideas and a long read to enjoy.  Sign up to The Age newsletter here, The Sydney Morning Herald’s here, Brisbane Times’ here, and WAtoday’s here.