In July 2016, Betsy Davis invited friends and family to participate in a celebration with a difference. At 4pm there were tamales, followed by cocktails. Guests then rifled through Davis's possessions, selecting keepsakes to take home. By 7pm, Davis had been changed into a blue and white kimono and wheeled up a hill to a ceremonial site. As the sun set, she consumed the pentobarbital solution that put her into a coma within minutes before ending her life.

Davis was an artist suffering from motor neurone disease who wanted to take advantage of the End of Life Option Act, which became law in California last June and allows for voluntary euthanasia. 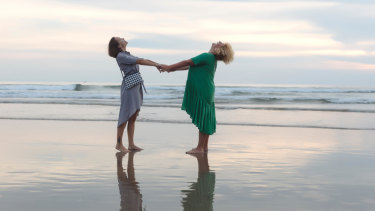 Lana Sussman: “There are celebrants who marry people and priests who christen babies, but what about someone who has had a miscarriage or a divorce? How do you mark that?”Credit:Alamy

"She did not ask to go quietly; she asked to go loudly and proudly, surrounded by beloved friends and family," her friend Kestrin Pantera wrote in the online publishing platform Medium. "Despite our collective uncertainty, we cheered her on."

The ceremony was an example of one among many new ways springing up to help people cope with their unfavourable circumstances. There are "living funerals" like Davis's, which choose to rejoice in life rather than mourn death. For cancer survivors, Pinterest contains batches of pink-hued mood boards created to celebrate mastectomies. There has also been a rise in divorce parties, the best-known being that of supermodel Karen Elson and Jack White of the White Stripes.

Lana Sussman, a clinical social worker and drama-therapist, believes such ceremonies are much needed. "We totally lack ritual, so people have trouble transitioning from one state of being to the next," she says.

Sussman maintains that ceremonies can help people process the grief and embrace a new way of being following life-altering events like amputation and divorce. "There are celebrants who marry people and priests who christen babies, but what about someone who has had a miscarriage or a divorce? How do you mark that?"

In 2012, Renée Catt, then a travel agent, was in the middle of a divorce when a life coach told her that she didn't have to frame it as a negative experience. At that stage she'd already thrown a "pity party", which involved drinking "copious amounts of wine". So at her life coach's suggestion, she went to Las Vegas for the weekend.

Once the paperwork for her divorce was finalised, Catt hosted a bash for her friends as a show of gratitude for their support and to mark the start of her new career as a life coach. "It had been a challenging year," she says, "and I wanted to celebrate more of what I had to look forward to."

While people may be able to see the silver lining of divorce, it is hard to see the bright side of dying, and few gravitate towards a living funeral. "We fear death, we don't face it," Sussman says. "Eastern religions have a completely different take on this."

Julia Handford, a celebrant from Victoria, advertised her availability for living funerals, targeted at the terminally ill. She's had little interest, though one elderly man has recorded a humorous video of himself to be played at his funeral. "It's full of one-liners he had obviously been working on for some time," Handford says.

However, he is still very much alive.

Despite this, Handford says people are gradually warming to the idea of living funerals. On a practical note, it takes the financial and organisational burden away from friends and family who are grieving. And emotionally, these ceremonies also have benefits.

It's such a healthy way of saying goodbye when you can do it in person with hugs and kisses," Handford says.

The lack of interest underscores Sussman's belief that our culture is not quite ready for this style of event. "We definitely shove death out of our minds and try not to think about it," Handford says. Perhaps, slowly, this will change. After all, death is something that happens to everyone.

This article appears in Sunday Life magazine within the Sun-Herald and the Sunday Age on sale April 21.