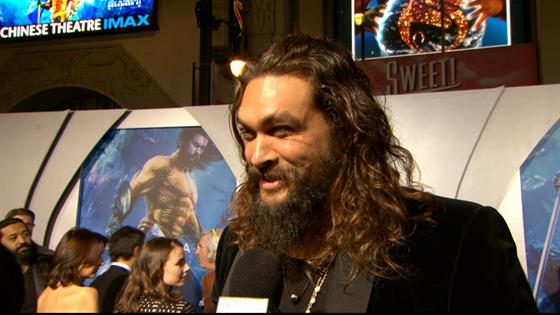 Fans know Jason Momoa can act, but did they know he can also dance?

The actor surprised everyone at the Hollywood premiere of Aquaman on Wednesday by performing a haka—a traditional dance in Māori culture.

The epic moment occurred after the DC star walked the carpet with his wife, Lisa Bonet, and their children, Lola and Nakoa-Wolf. He then grabbed his trident, stripped off his black jacket (showing off his physique) and summoned his fellow dancers to join him. Momoa seemed to put his heart and soul into each of the moves and the chant. Even his kids joined in on the fun as did his co-star Temuera Morrison, who plays his father in the film. At one point, Momoa smashed his trident over his knee, breaking it in half.

Of course, the crowd erupted with applause after the performance.

So, what inspired the star to break out into dance in the first place? Momoa told E! News he considered it an “offering” and that he had dedicated a lot of his energy to honoring the people and culture. As for his kids joining in on the fun, he suggested it was a total surprise.

Watch the video to see him dance and talk about the amazing moment.

Momoa wasn’t the only celebrity at the premiere. His co-star Nicole Kidman was also there with her husband, Keith Urban, and their children. Their fellow cast members Amber Heard, Patrick Wilson and Dolph Lundgren were there, as well.