An anonymous tip about criminal conduct in Parliament House sparked a security review last year to examine whether officials had interfered with a suspected crime scene later named in allegations of rape.

Former federal security inspector-general Vivienne Thom was called in to review the explosive claims and view footage of closed-circuit television to check serious allegations against officials in the building. 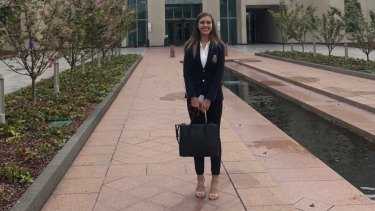 Brittany Higgins outside Parliament House on the first day of her job.

The anonymous warning fuelled concern that officials sent cleaners into the office of Defence Minister Linda Reynolds on Saturday, March 23, 2019, and destroyed evidence of a crime.

Former adviser Brittany Higgins says she was raped by a colleague in the office after security guards let her and the man into the building late on the previous night.

Prime Minister Scott Morrison has promised an independent review of the way Parliament supports its members’ staff after former staffer Ms Higgins accused him of victim-blaming her, and revealed she didn’t know many of the details about her own alleged assault until this week.

Dr Thom became one of a small group of people to view the CCTV footage, with the others being Australian Federal Police officers and authorised officials from the Department of Parliamentary Services, which runs the building.

No ministers or ministerial staff viewed the footage, according to statements given to The Sydney Morning Herald and The Age.

Dr Thom, who was Inspector-General of Intelligence and Security for five years and deputy Commonwealth Ombudsman before that, found no substance to the claim that a senior official within DPS instructed cleaners to have the suite cleaned.

Dr Thom also found no substance to claims that a senior official within DPS asked staff to amend incident reports to delete information about what took place on the Friday night and Saturday morning.

The extraordinary review was ordered by House of Representatives Speaker Tony Smith and Senate President Scott Ryan in June last year after the anonymous tip, which also made allegations on matters beyond the events in Senator Reynolds’ suite.

The two presiding officers, who are responsible for Parliament House, also sent the accusations to the Australian Federal Police, which checked with DPS on the way the incident in March 2019 was handled. 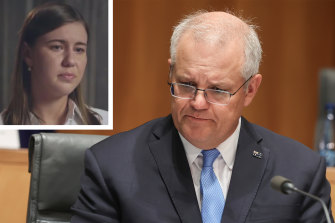 “As recently as Friday, 5 February, 2021 the presiding officers were advised by the AFP there was no active investigation into the events of 26-27 March 2019,” the department said in a statement late on Wednesday.

“On 12 February, following receipt of a media inquiry, the presiding officers contacted the AFP and were advised that Ms Higgins had since approached the police and indicated she wished to proceed with a complaint and it was an open investigation.”

The reviews by the AFP and Dr Thom shed more light on the handling of the CCTV files at a time when Ms Higgins fears many people saw footage she was not allowed to see.

“A current senior staffer to the Prime Minister and my former chief of staff refused to provide me with access to the CCTV footage from that evening and continually made me feel as if my ongoing employment would be jeopardised if I proceeded any further with the matter.

“The continued victim-blaming rhetoric by the Prime Minister is personally very distressing to me and countless other survivors.”

Senator Reynolds and her chief of staff at the time, who has since moved to Mr Morrison’s office, did not ask to see the CCTV footage, according to the review of the events.

The footage does not show Ms Higgins or her colleague inside the office of Senator Reynolds because cameras are not located inside suites. Those who know the rules over CCTV in the building said it was likely to show the two people entering the building on the Friday night and going to Senator Reynolds’ office.

Security guards saw the man exit the building while his female colleague remained in the minister’s suite. This led to a female security guard checking the suite on the Saturday and finding Ms Higgins.

The man was fired on the Tuesday over the security breach. Only on the subsequent Thursday did Ms Higgins tell Senator Reynolds’ chief of staff she had woken to find the man on top of her, the key point at which it was clear there was an allegation of rape.

Mr Morrison on Wednesday made an appeal to all sides of politics to back an independent review because it would be done at arm’s length from the government. It will run alongside a review run by Liberal MP Celia Hammond and another review by Department of the Prime Minister and Cabinet deputy secretary Stephanie Foster.

“It is my expectation that this review would be conducted at arm’s length of government, consult widely across parliamentarians and their staff, the departments and agencies that support our work,” he wrote to opposition parties and crossbench MPs.

Senators are divided on whether the Finance and Public Accounts committee should intensify its probe into the department that runs Parliament House, the Department of Parliamentary Services.

The committee launched its inquiry last year and received private submissions that drew attention to a March 2019 incident in a ministerial suite in which a woman was in a distressed state.

The submissions were not released because the inquiry was looking into confidential security matters, but they did not name individuals. It is not clear whether Senators knew this involved an alleged rape.

The committee chair, Tasmanian Liberal Senator Claire Chandler, declined to comment, as did the deputy chair, NSW Labor Senator Tim Ayres. The committee meets on Thursday to discuss whether to use the inquiry to ask officials about the events.