Prime Minister Scott Morrison has all but abandoned a national hotspot definition while insisting the Avalon coronavirus outbreak and the response from premiers meets it.

The states have scrambled to put travel restrictions on people coming from the greater Sydney region this week, throwing Christmas holiday plans into disarray for many Australians. 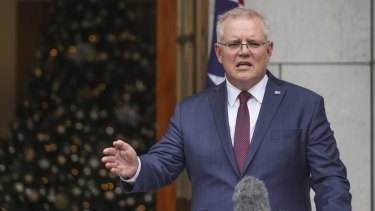 Prime Minister Scott Morrison says there is not yet a need for national cabinet to meet to discuss the Avalon cluster.Credit:Alex Ellinghausen

The Commonwealth had wanted states and territories to agree in September to a national hotspot definition both to trigger and ease restrictions such as border closures, but Mr Morrison failed to convinced other leaders to sign up.

Mr Morrison said at a press conference in Canberra on Monday the Avalon outbreak met that proposed definition but he had given up on its adoption.

"State premiers take their responsibilities for the public health of people in their jurisdictions very seriously. If they feel that they want to have a stronger rule or different set of rules … then that is understandable," he said.

"My door is always open to have those discussions but I can assure you the states have a strong view about retaining their decision-making power over those issues."

Victoria has closed its border to greater Sydney and the Central Coast, and given Victorians until midnight Monday to get home. Queensland has done similarly, while the ACT says anyone from Sydney, Wollongong or the Central Coast should not come to Canberra or must quarantine for 14 days.

Mr Morrison said the "precautionary actions" were understandable and offered a slim hope border closures could be eased by Christmas.

"It may well be that what we're seeing in the Avalon outbreak comes and goes the same way that the Adelaide outbreak went and it all comes and goes in that sort of period of time," he said. "We're not at that point yet to be able to make those judgments."

Chief Medical Officer Paul Kelly said the trend was good, with 15 positive cases out of 38,000 tests, but there was no guarantee the numbers would not rise again.

The Australian Health Protection Principal Committee is meeting daily to discuss the situation. Health ministers will meet on Wednesday, while transport ministers were called into a meeting on Monday by Deputy Prime Minister Michael McCormack to ensure border restrictions do not interrupt freight.

Mr Morrison said he had not received any "direct requests" to convene a meeting and urged patience for a couple for days to see how the situation developed.

"If there is a need to [meet], of course we can do that," he said. "Do it on Christmas Eve if necessary, we can do it on Christmas Day, but between now and then I think we allow those who have the job of advising and taking the operational decisions to just get on with it."