The year-end rush of movies might prove me wrong, but the biggest cinematic clash of titans in 2019 isn't the one between carmakers Ford and Ferrari dramatised by James Mangold, or the rematch between Rey and Kylo Ren in the forthcoming Rise of Skywalker. 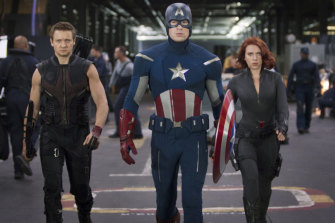 Rather, it's the brawl set off by director Martin Scorsese's declaration that Marvel’s superhero movies are “theme parks” rather than cinema. Even in our era of pitched culture warfare, it's rare for any argument to last this long. Scorsese fuelled the battle with an early November op-ed defending his position, prompting a response from Marvel chief Kevin Feige.

Scorsese's contentions – that the Marvel movies are formulaic, don't attempt to explore the full spectrum of human experience, and are crowding other movies out with all the relish of a world-devouring super-villain – are undeniably true. But it might not matter: Marvel's takeover of popular culture is already too far under way.

As movies, the entries in the Marvel Cinematic Universe are consistent, competent and rarely outstanding. It's as a piece of public relations that the franchise's diabolical brilliance really becomes apparent: The MCU isn't built merely to entertain you, but to anticipate and blunt your objections.

Vexed by the overwhelming whiteness of Hollywood? Not to worry, Marvel has paired up director Ryan Coogler and actor Chadwick Boseman to give you a fantastically Afro-futuristic Black Panther.

Uneasy about racial stereotypes in the Doctor Strange comics? Marvel avoided one pitfall (though the company stumbled into a whitewashing controversy), garnered a few feminist brownie points and appeased Chinese censors anxious about references to Tibet by recasting the Ancient One as a Celtic woman played by Tilda Swinton.

LGBT representation? The Asgardian Valkyrie (Tessa Thompson) and … some random guy in Captain America's post-apocalyptic support group … turn up to tick that box.

Never mind that the overall story arcs are managed from on high; that the action sequences are practically factory-generated; that these depictions of black superheroes or LGBT people or women never actually say anything about racism, homophobia or misogyny; or that the movies themselves rarely say much of anything at all.

Not only has Marvel lined up these arguments neatly, but it has pulled off the ultimate accomplishment by persuading a huge number of people to argue on the company's behalf, as if it's a beleaguered underdog. This inversion of the relationship between customer and company is a powerful reversal of current: not only have fans made Marvel box office champions; they're doing unpaid work as the franchise's publicists.