ST PETERSBURG (Reuters) – Most weeks, Roman Redman does a few extra hours in the kitchens of his ribs and burger joint in Saint Petersburg to cook for a less hipster clientele: the city’s poor and homeless. 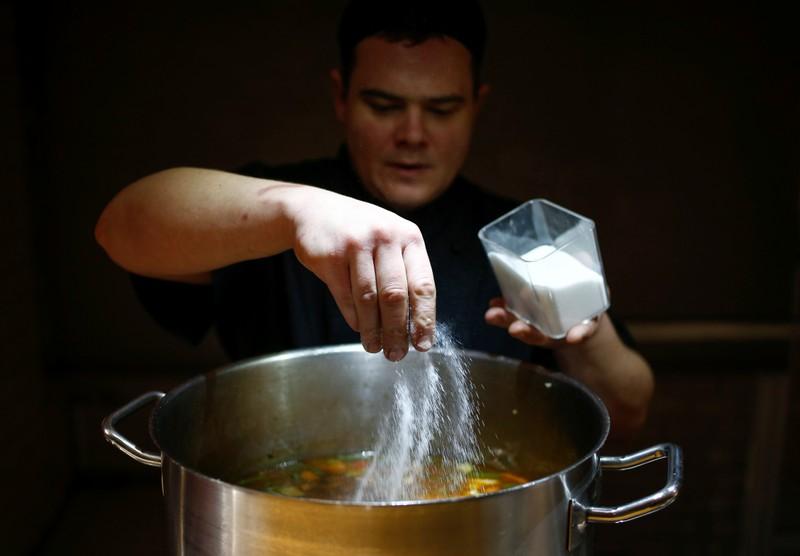 The traditional meat and cabbage soup is ladled into big flasks and driven by volunteers to places around the city where people live rough or subsist on small state pensions.

It’s then distributed free to enable people to eat and stock up on supplies and it’s particularly welcome in winter when city temperatures can drop to -20 Celsius (-4 Fahrenheit).

“It’s only because of this that I survive,” said one man after glugging down soup handed out from the back of a van on a frigid evening last month.

Homelessness existed in the Soviet Union, even though the government offered cradle-to-grave provisions, but since the collapse of the system in 1991 and its replacement by a free market the number of homeless people has risen.

Official statistics say there are almost 65,000 registered homeless people in Russia but others say the true figure is far higher.

The food supply van is run by the Nochlezhka charity and stops at four locations in the city almost daily, serving up soup and tea as well as contributions from partner restaurants like Holy Ribs, where Redman works, and others like Italia.

Nochlezhka is a charity that helps the poor and homeless in Moscow and Saint Petersburg. For Redman, cooking soup is the way to make a difference for people who often receive little state or community support.

“The city lacks these kind of projects, there need to be more of them,” Redman said.

The people queuing up for food outside the van are not just homeless, but also pensioners.

For another homeless man who identified himself simply as “the duke”, the hot soup and supplies help him get through the winter.

“You can’t cook anything in the street and Nochlezhka helps with warm soup and tea,” he said. “At least you can bring a bottle with you into the basement and put it on a radiator, to warm the tea up again.”