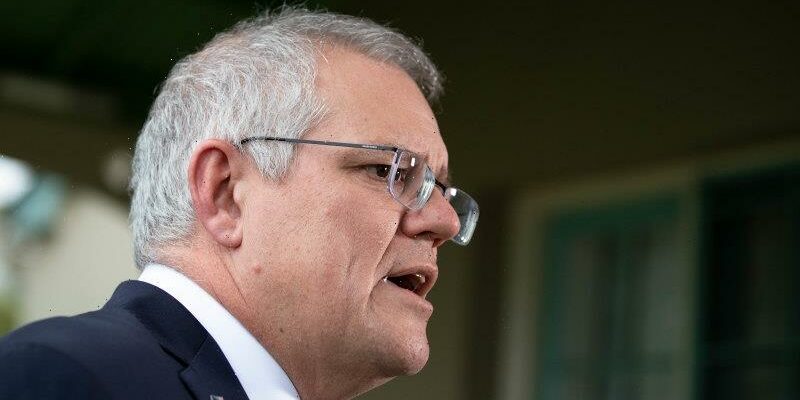 Scott Morrison faced an inevitable question in the hours after former prime minister Kevin Rudd confirmed he had spoken to the global chief executive of Pfizer two weeks ago to ask for more vaccines to be sent to Australia.

That question? When did Morrison speak to the Pfizer boss, Albert Bourla? 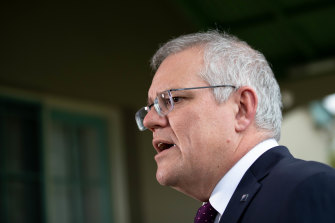 The vaccine rollout is so far behind other countries that Scott Morrison has to account for the decisions he did not make, just as much as the ones he did.Credit:Janie Barrett

The answer? Never. The Prime Minister told Sky News on Monday he had met one of Pfizer’s senior directors in Europe last month but had mostly spoken to the company’s Australian managing director.

When Health Minister Greg Hunt faced the same question, he said he had also dealt with the local subsidiary, as well as a company director he did not name.

It may seem a small point in a pandemic that has left Australia in a strong position compared to other countries, with low case numbers and fewer deaths. But the vaccine rollout is so far behind other countries that Morrison has to account for the decisions he did not make, just as much as the ones he did.

The comparison with other countries is crucial. Morrison names Israel as the only country with a vaccination rate of more than 65 per cent but does not mention one of the reasons.

“I was impressed, frankly, with the obsession of your prime minister,” Bourla told Israeli television in March. “He called me 30 times.”

Bourla has been frank about the way national leaders call him to secure supplies. In fact, he asked to deal with Japanese Prime Minister Yoshihide Suga directly in April to deal with fears about vaccine shortages. That phone call reportedly led to Japan gaining 50 million extra doses by September. 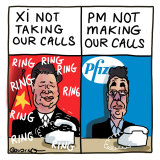 When Canadians worried about supplies in the northern winter in January, Prime Minister Justin Trudeau set up a phone call with Bourla. Canada has a vaccination rate of 41 per cent, about four times that of Australia.

The President of the European Commission, Ursula von der Leyen, called the Pfizer boss “dear Albert” at a meeting in April while United States President Joe Biden held a press conference with him at the G7 summit last month. Bourla, the son of Greek parents who survived the Holocaust, has talked several times with Greek Prime Minister Kyriakos Mitsotakis.

This would not matter if Australia had the same vaccine supplies as other countries, but it has been left in the dust. Morrison has swerved all over the road with his messages, from putting the country “at the front of the queue” to assuring everyone it was “not a race” and then promising results by Christmas.

The government has had to respond to huge setbacks under extreme pressure. First the call to drop the University of Queensland vaccine, then European Union vaccine export restrictions and concerns over rare blood clots linked to AstraZeneca. Medical advice in April, telling people under 50 to take Pfizer instead, was devastating to the rollout.

To his credit, Hunt adapted quickly. He secured more Pfizer doses in February and again in April, increasing the total to 40 million this year, and then gained 25 million of the Moderna vaccine in May.

But each setback raises the same concern. Did Australia put its eggs in too few baskets? Were Australian political leaders too comfortable when they should have been doing everything possible to secure as many options as possible as early as possible?

Every political leader can be judged on the numbers in this pandemic. If Morrison wants the credit for low case numbers and deaths, he gets the blame for low vaccine supplies.

This is the real importance of Rudd’s intervention. There is no evidence his phone call with Bourla changed anything in the past few weeks, but it highlights there was no similar call from anyone in charge. That looks complacent and embarrassing.

Rudd, in other words, has intensified the attack on Morrison to a level Labor leader Anthony Albanese often struggles to reach. While the official opposition takes its time, Rudd and another former prime minister, Malcolm Turnbull, grab the headlines with their assertions of a massive government failure.

The questions are bigger than the argument over whether Australia turned down an offer from Pfizer in July last year.

The events at that meeting are disputed and covered in-depth by Rachel Clun here, but there can be no argument about Australia’s sluggish approach. The United Kingdom, the US and Japan struck deals with Pfizer in July, Canada in August and the EU in September. Australia took until November.

Morrison says the demand for vaccines has been lower in Australia because the country has done so well in fighting the virus. “To a sense, we’re prisoners of our own success,” he says.

Yet there are queues at vaccine hubs. Doctors want more doses at their clinics. Pharmacies want to offer the jabs, too. And younger Australians are told to wait months to be protected.

The problem is supply, not demand. The failure to buy more vaccines sooner, from more suppliers, is fundamental. Australians may decide they are not prisoners of success at all, but prisoners of failure. That is a question for the ballot box.