ROBERT HARDMAN: Triumph of the Tree Angels! School orchards funded by £500,000 raised in Mail campaign are being planted and already bringing a harvest of joy

Though the poor old fir tree can’t be having much fun at the moment – uprooted, dragged indoors and wreathed in tinsel – this is, nonetheless, a great weekend for treekind in general.

And that is thanks, in no small part, to the Mail’s magnificent Be A Tree Angel campaign.

For only now we can finally start to see the full impact of what you, our readers, have achieved for Britain.

It was exactly this time last year that we urged you to join our fresh appeal to give the UK’s permanent tree population a boost.

You responded with such eagerness that inspired some of our best-known business leaders to contribute more than half a million pounds to the cause.

Working hand in hand with the Tree Council, we provided tens of thousands of willow, holly, birch and oak trees for planting everywhere – in public spaces or in your own gardens. For example, more than 20,000 spruces were donated to Forestry Commission Scotland.

Network Rail joined in with a pledge to spend £1million on community tree planting, by way of replacing all those which must be removed to keep tracks clear and safe.

At the centre of it all, however, was our flagship programme, Orchards for Schools. And what a difference it is now going to make.

The idea was not merely to add some pleasant landscaping to the playground. It was to instil a sense of curiosity, wonder and love for the role which trees play in our lives; it was to show that trees are not just for climbing – and that they may also provide some tasty results along the way.

Yet just as the results of this great campaign were about to take root – literally – then along came the coronavirus.

The only really good time of year for planting trees is between now and March.

Thanks to Covid-19, however, that was never an option last winter. By the time our trees were ready for planting, schools were shutting down and teaching staff, very understandably, had other priorities.

A primary school in London has added to its edible playground by planting ten fruit trees as part of the Mail’s campaign.

Pupils including Surrayah and Max, both seven, pictured, at Woodmansterne Primary School in south-west London braved the cold this week and planted plum, cherry, apple and pear trees.

Michael Dinsmore, head of outdoor learning at the school, said the children also had lessons about the importance of tree planting and protecting the environment.

He said: ‘The weather was a bit grim but the children were so excited to plant the trees it was hard to calm them down for their lessons afterwards.’

The trees will grow alongside other fruits and vegetables in the school’s ‘edible playground’ which the children help to maintain. It already includes vegetables such as lettuce, kale, broccoli, tomatoes and potatoes.

The school’s caterers serve what is grown there to the pupils for lunch and the children also have lessons on the importance of healthy eating.

Mr Dinsmore said: ‘Ordinarily it can be quite hard to get the children… to eat their vegetables. But they seem to enjoy it more if they’ve grown them themselves and seen where they’ve come from.’ 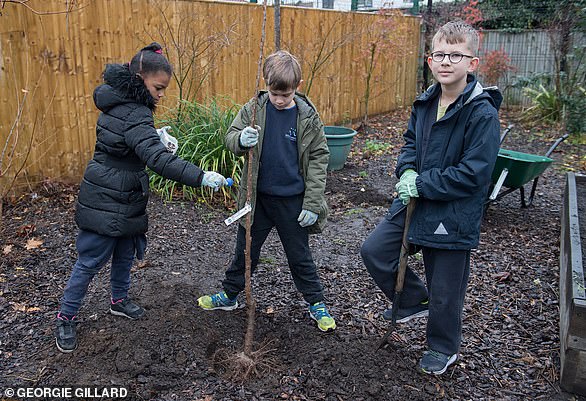 Pupils including Surrayah and Max, both seven, pictured, at Woodmansterne Primary School in south-west London braved the cold this week and planted plum, cherry, apple and pear trees

However, many of those schools are now itching to get planting now. After all, we are in National Tree Week. Our partners at the Tree Council, the charity which champions all things tree-related, have been co-ordinating several new initiatives. Yesterday, for example, the Government announced 850,000 new trees for flood zones.

And, in the last few days, schools across the United Kingdom have been getting out the tools and digging. So I have come to one of them, the Capital City Academy in Brent, one of London’s most densely-populated boroughs. According to the national league tables, it has some of the worst air pollution in the country, too.

‘It was thanks to the Daily Mail that we got involved. Our sponsor, Sir Frank Lowe, saw your Tree Angel campaign in the paper and suggested we get involved,’ said principal Marianne Jeanes. And they have done so with gusto.

A patch of previously out-of-bounds wasteland at the back of the main school building has been cleared, dug up, turned over and is now ready to welcome much more than a few saplings.

‘We’re having the fruit trees here. We’re putting in a pond with frogs and wildlife here – we’ll be using that for science lessons – and we’ll have herbs, flowers and strawberries over there,’ explained PE teacher Stephan Hastings, proudly giving me a guided tour ahead of yesterday’s main tree-planting ceremony.

‘It’s about learning how you can make something out of nothing.’

At the centre of it all will be a new tulip tree in memory of a much-loved former member of staff Mr Hassan, who died after contracting Covid-19 early on in the pandemic.

When the new orchard is in full bloom, it will be a very handsome addition to what was London’s first new-look academy, opened by then-prime minister Tony Blair in 2003.

Like all projects of this sort, the orchard idea simply needed someone to take a lead and a few determined enthusiasts.

‘We had wanted to do an allotment but then the Mail’s tree campaign came along and it’s grown from there,’ says Mr Hastings.

Although the coronavirus initially forced plans to go on hold, he never gave up.

With help from the Tree Council, the original plan for an orchard of apple, pear, cherry and plum trees has gradually expanded.

There will now be a new hedgerow, too.

The pupils have been given 120 blackthorn, quick thorn and dogwood plants plus several raspberry bushes.

Since the school had no gardening kit of its own, the Tree Council decided to throw in some new spades, forks and gloves, too.

The first task was to clear the site of all the litter lobbed over the fence from an adjacent park. Someone had even hurled a shopping trolley.

Mr Hastings hired a rotorvator to turn over the soil and, gradually, interest grew. Some pupils would stay for hours after school to muck in.

Their enthusiasm would prove infectious as I find more than a dozen volunteers from Year Nine and the sixth form cheerfully digging away in a freezing downpour.

Most explain that they have little or no outside space at home but have high hopes for the school’s new orchard. Plans are afoot for a mural on the adjacent wall.

Yahya Ahmed, aged 17, said: ‘We only have a tiny community garden at home and that is overgrown – but I want to learn how to grow things.’

An A-Level student with plans to read maths at university, he said that he was also inspired by the memory of Mr Hassan.

‘I wasn’t in one of his classes but he was just one of those teachers with time for everyone. He was a kind man and this is a good way for us all to remember him.’

The group call themselves the Orchard Remembrance Conservation Society – ORCS – a nod to Tolkein’s fictional orcs, a menacing tribe of underground warriors whose one redeeming feature is their love of nature.

Many more of Capital City Academy’s ‘Orcs’ would be here today, were it not for a couple of cases of Covid-19 in two other classes closely involved in the project. Much to their irritation, they have all had to self-isolate.

Mr Hastings showed me the colourful magazine they have all produced for the opening ceremony, thanking all their supporters, including the Mail and the chairman of the governors, former England footballer Garth Crooks.

Some of the articles are by refugees from the war in Syria whose fondest memories of their homeland include the gardens left behind.

‘In Syria, my grandparents’ garden was full of trees like fig, pomegranate and amazing hibiscus flowers,’ wrote Buchra Alhawamdeh, adding that the new school garden will be a place to ‘meet, cultivate love, grow food and share with friends’.

Just like Capital City Academy, more than 750 schools right across Britain are finding that a new orchard can bring all sorts of unexpected benefits.

From Five Islands Academy in the Scilly Isles to Dyce Academy in Aberdeenshire; from Benhall St Mary’s Primary in Saxmundham to Ysgol Penrhyn Dewi in St David’s and Ebrington Primary in Londonderry, new trees – and, with them, new adventures – are now taking root.

A further 750 schools are looking forward to embedding their trees next winter. Sara Lom, chief executive of the Tree Council, explained that as a result of the pandemic, some schools and some tree nurseries will not be ready until then.

And there is still availability for new schools or community groups (including Scouts, Guides and others) who may want to sign up.

‘Trees are one of the best warriors in the fight against climate change and planting more of them is essential to slow down this crisis,’ said businessman Lord Sugar, a major backer of our Be A Tree Angel campaign.

Best known for his role in BBC1’s The Apprentice, Lord Sugar donated £100,000 towards school orchards in the hope of inspiring thousands of ‘green apprentices’.

He was joined by the entrepreneur Richard Caring, the Apple design guru Sir Jonathan Ive, banker Vernon Hill and an anonymous donor who all gave the same amount to generate a legacy which will be enjoyed by millions of schoolchildren for years to come.

What’s more, thanks to a further donation from Mr Hill, schools can now apply for hedging plants and other trees (not just the fruit variety) for their orchards.

All told, well over 60,000 trees will now be donated over the course of the programme.

At the same time, as we reported yesterday, Network Rail this week has just embarked on their tree-planting campaign, laying down the first of more than 20,000 trees which will be in place by the end of the year, rising to 80,000 in March. Many times that number are coming in the years ahead.

All of this could hardly be more timely. For if we can draw one upside from the mayhem wreaked on our lives and on the economy by the wretched coronavirus, it is a renewed and deeper fondness for the natural world – and, in particular, for the trees – around us.

A new Forestry Commission survey of more than 2,100 people showed that a third feel an increased appreciation for woodland trees while over half said that they have started to appreciate trees in their local streets and parks.

It follows a recent Natural England poll showing that 47 per cent of people have been spending more time outside than before the pandemic started.

And now, children all over Britain are about to discover something new and inspirational taking root in a schoolground from which, for so much of this year, they have been excluded.

You weren’t to know it when you signed up to Be A Tree Angel all those months ago.

But your contribution has been even greater – and more important – than any of us could possibly have imagined.