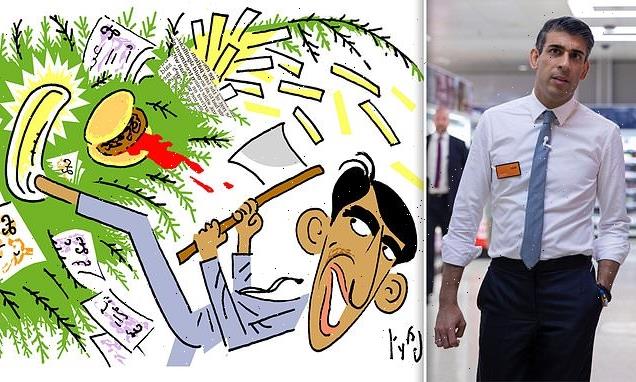 RICHARD LITTLEJOHN: Rishi Sunak took an axe to the Magic Money Tree, and it fell on his head… Sporting a pair of three-hundred quid plus trainers while presiding over a seismic cost-of-living crisis is not a good look

Who spends £335 on a pair of trainers? A Kardashian, perhaps. A Russian oligarch’s daughter? Someone with more money than sense?

Mike Ashley’s Sports Direct will knock you out a pair of natty Adidas pumps for a very reasonable £35. Tesco has some perfectly serviceable sneakers priced at just £16.

So what possessed Chancellor Rishi Sunak to blow more than a week’s minimum wage on a pair of Achilles grey leather jobs from designer label Common Projects?

And why on earth would he choose to parade them in public just days after imposing the highest tax burden on the rest of us since the doodlebugs were raining down on London during World War II?

His trendy trainers are apparently a ‘favourite of the fashion pack’, including supermodel Gisele Bundchen and rapper Jay-Z, whoever they are. 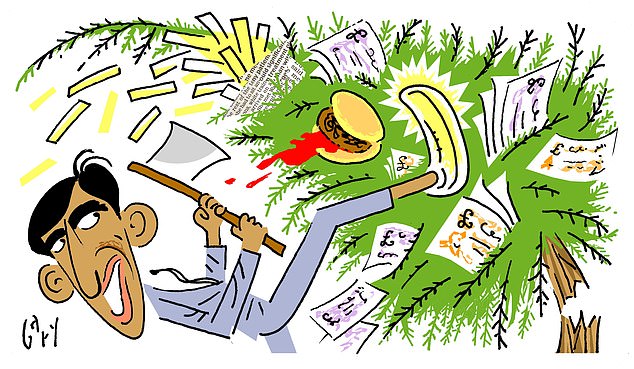 Made in Italy from the finest leather, they have a gold foil serial number on the heel and are considered perfect for ‘weekend city looks’. Ideally, they should be paired with rolled-up jeans and a lightweight knit for ‘understated flair’, according to the fashionista website mrporter.com.

Lightweight knit, or rather Lightweight Nit, would appear to describe Rishi to a T-shirt — presumably from Armani and costing several hundred pounds. The Chancellor was photographed at the weekend in his pristine Achilles trainers and trademark half-mast strides, which look as if they came from Mothercare, like his Norman Wisdom suits.

No doubt he thought he was the dog’s wotsits. To the neutral observer it was an exercise in excess. To anyone waking up to a 100 per cent increase in their energy bills and hoping for some significant help from Sunak’s mini-budget last week, he was taking the proverbial.

Sporting a pair of three-hundred-quid plus trainers while presiding over a seismic cost-of-living crisis is not a good look in anyone’s book.

Talk about tone-deaf. This was full-on deaf, dumb and blind kid — sans pinball.

Still, we are talking about a man who uses a ridiculous £180 self-heating coffee mug while poring over the nation’s finances. If you want to be seen as a master of fiscal rectitude, Argos will do you a nice line in mugs, coffee or tea for the use of, starting at seven quid for a set of four.

Two years ago, Sunak was the nation’s darling, ladling billions of pounds of borrowed money in furlough payments. 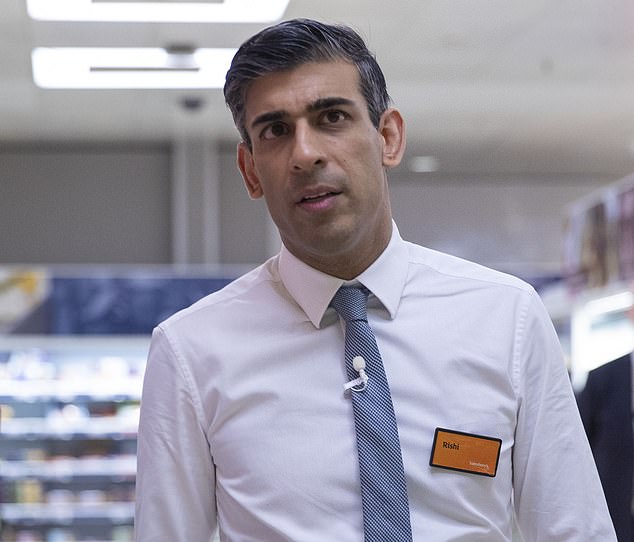 What possessed Chancellor Rishi Sunak to blow more than a week’s minimum wage on a pair of Achilles grey leather jobs from designer label Common Projects?

All well and good at the start of the Covid pandemic. But I did warn you as early as May 2020 that he was living on borrowed time.

The largesse couldn’t last. The £400 billion debt would have to be repaid somehow. And that would inevitably lead to higher taxes.

But instead of gradually weaning people off state-subsidised idleness to soften the blow, Rishi went into drunken sailor mode.

Remember Money For Nothing And Your Chips For Free, his insane scheme for paying us to eat out? People who were told it was too dangerous to go into work were encouraged to flock to crowded restaurants to take advantage of half-price burgers.

Complete madness. If he’d wanted to help the hospitality industry, which was crippled by lockdown, he could have announced a VAT and business rates holiday. Instead he chose to bribe voters with cut-price cheeky Nando’s.

As some of us suspected at the time, this was mostly to do with courting popularity and building Brand Rishi at taxpayers’ expense. Needless to say, the Boys In The Bubble bought into this shameless sleight-of-hand, bigging him up as our next PM In Waiting.

For a while, Sunak seemed to have discovered the bright elusive Magic Money Tree, the gift that kept on giving. In doling out the dosh, he single-handedly created the pernicious entitlement culture which is blighting Britain’s economic recovery prospects.

Once you start paying people to sit at home watching Netflix and eating Hobnobs they come to take it for granted.

The ruinously expensive furlough scheme should have been wound up within a few months, not extended long past its best- before date.

As a result, it is proving virtually impossible to persuade people to return to their offices, especially those in the feather-bedded civil service, who are stubbornly resistant to abandoning their Pelotons and pyjamas and rejoining the daily grind.

There was always going to be a day of reckoning. It came last week, as he presented the bill for two years of hosing down the country with ‘free’ money.

Sunak had to take an axe to the Magic Money Tree. And it came crashing down on his own head.

Just as I warned at least 18 months ago, he was riding for a fall. Giving away cash was the easy part. His popularity was never going to survive the difficult process of clawing it back.

His fall from grace has been pretty spectacular. By all accounts, after last week’s financial statement he doesn’t have a friend left in Cabinet. The carefully cultivated public image is crumbling fast.

Voters will overlook the £335 trainers and £180 coffee cups when things are going well. But when the solids hit the air conditioning, all bets are off. Sunak should have seen it coming and trimmed his sails accordingly.

But he has become hooked on image and self-promotion. Suddenly, he looks less than invincible.

Borrowing a Kia from a supermarket worker for a photo call and trying to pay for petrol by offering up his Coke can to the barcode scanner was staggeringly inept and rightly led to accusations that he was out of touch with everyday life.

I’m not going to criticise him for having risen from fairly humble beginnings to making a small fortune in finance before becoming an MP. That’s a big plus, not a minus. Nor am I going to drag in his wife’s vast wealth. The politics of resentment has no place in this column.

But there’s something unsettling about the way in which Sunak and his minders have manipulated his image. Close your eyes and you could be listening to Tony Blair. Open them and he’s even adopted those irritating New Labour finger and thumb hand gestures.

After initially appearing to be a refreshing new broom at No 11, he’s now gone native. All Chancellors eventually get captured by the Treasury, but Dishi Rishi has gone the full Patty Hearst.

His mini-budget was a dog’s breakfast, over-complicated and unnecessarily confiscatory. He could have afforded to scrap the National Insurance increase and make good on the Brexit promise to remove VAT from fuel. Instead, he blew it.

His ‘jam tomorrow’ carrot of a 1p income tax cut before the next election is little more than a cheap gimmick, a political stunt.

My guess is that he’s also blown his chances of moving next door to No 10. Those inappropriate, gold-plated £335 designer trainers will come back to haunt him.

What shall I do?

I wanted to be Prime Minister,

Provide your own rhyme. 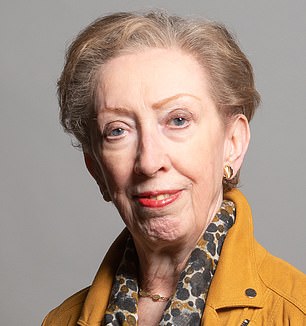 The news that Margaret Beckett is standing down from Parliament made me feel ancient.

I covered her first attempt, as Margaret Jackson, to become an MP in Lincoln in 1974.

She was narrowly beaten by Dick Taverne, who had resigned from Labour and was standing as an independent.

Back then, part of her popularity was said to be the fact that she looked just like Princess Anne.

Come to think of it, she still does.

Former Equalities minister Maria Miller complains that she has been ‘cyber-flashed’ by a man on a train who sent her a photo of his penis via mobile phone.

As Miller is someone who long campaigned for people to be able to self-identify their gender, how can she be sure that this wasn’t a woman sending a picture of ‘her’ penis?

Following Friday’s column, in which I mentioned seeing a middle-aged man wearing a mask in an open-top car, a number of readers have emailed with similar absurd sightings. Martyn Sharpe spotted a masked man in a canoe paddling along the Chesterfield canal in Retford. In Dorset, Val Dalton saw a woman on horseback in a mask on a remote country lane near Bridport. The woman, that is, not the horse.

Prisoners are preparing for ‘Working From Home’ after being released by slobbing about all day in their pyjamas. It’s a matter of necessity, mind you, because inmates at HMP Eastwood Park have put on so much weight during lockdown they no longer fit into their prison uniforms. Hang on a minute, how did that happen? Isn’t prison, by definition, supposed to be lockdown?