A single mother-of-three was left overwhelmed with tears of joy after taking part in Rich House Poor House.

Tanya Buck, who lives with her three children Dylan, 16, Faith, 10, Esmé, three months, in a housing association property in Basingstoke, returned after the Channel 5 house swap to find her entire home had been carpeted.

The cash-strapped mum, who spent last Christmas homeless in a B&B with her children, was stunned to find that the bare floors she left behind had been transformed.

The Hogan family, who have a £1.9m home, a weekly budget of £3,336 and spend Christmas in Thailand every year, wanted to help kick-start the redecoration of the Tanya’s family home just in time for her daughter starting to crawl. Noel and Lisa Hogan, who have been married for 26 years and live in Farnham, were in awe of what Tanya had achieved as a single mother hoping that the new carpets would take some pressure off her.

‘It will be lovely for Esme just in time for her to be crawling,’ Lisa said.

‘It’s a strange one for Santa to come up with but hopefully they’ll all be happy,’ added Noel.

‘Money is lovely but its family that matters the most. I really do think she’s done a fantastic job.’

Tanya wept into the arms of her son Dylan before reading a letter from the Hogans pledging their help to finish off the rest of the house: ‘I can’t believe it.’

Tanya, who runs her own small domestic cleaning company and usually has £143-a-week budget, explained the family had been through a lot after they were forced to live in emergency accommodation the previous Christmas.

She said during the programme, which sees families living below the breadline swap with their richer counterparts for a week: ‘We had to live in a B&B for six weeks, you feel like you’ve failed them.

‘This is the first home we’ve felt safe and secure in. Christmas was a difficult time last year, I was really stressed.

‘Not only is it financially difficult, but to find out you have got to move and you’re also having a baby. This Christmas is the opposite end of the spectrum.

‘This week is going to be one Christmas that I think we will ever forget.’ 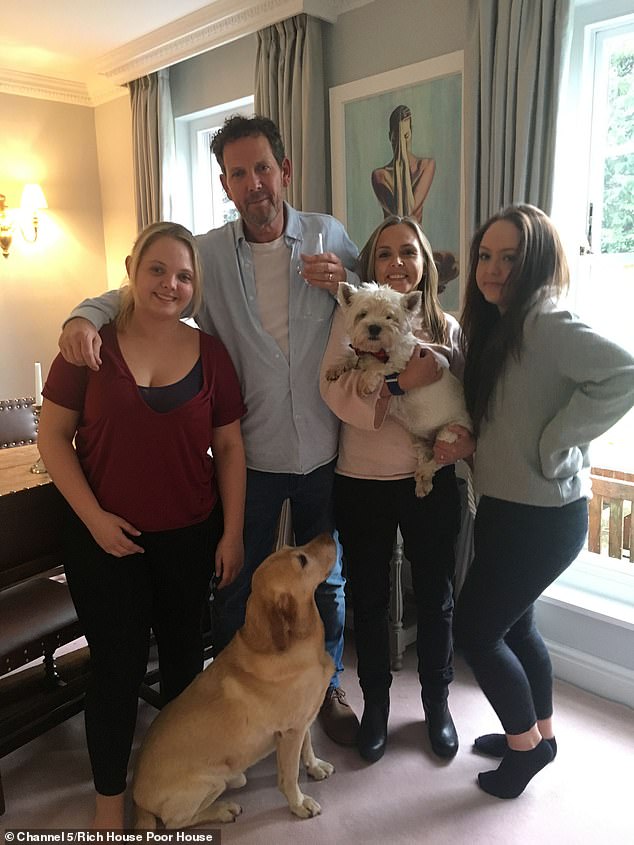 Noel and Lisa Hogan (centre) with their two daughters Amber, 21, and Aysha, 17, live in area with average house prices of £1.9m, have a weekly budget of £1,336 and spend every Christmas in Thailand

Tanya admitted she often struggles at Christmas, getting herself in debt so that she can make sure her children have gifts to open.

She made sure to take advantage of the Hogan’s £3,336 budget, going on a shopping spree for presents and treats.

Carting enormous bags down the street while pushing Esmé’s pram she commented on the feeling: ‘Going in to nice shops that I wouldn’t normally go in, looking at the size and not the price, it’s the best feeling ever. I feel like a spoilt little girl.’ The single mum put the Hogan’s £3,336 budget to good use by going on a shopping spree, but not all the presents were for her family; she also made sure to buy gifts for the ‘forgotten homeless’ families who were staying in emergency accommodation

But Tanya wasn’t just shopping for her family, she also bought gifts for homeless families.

Enlisting the help of Dylan and Faith they wrapped up board games, toiletries, and chocolates before dropping them off at a local charity.

‘It’s very easy to see the sleeping bags in the doorways but actually there are going to be a lot of homeless kids this Christmas in B&Bs up and down the country.

‘It’s almost like the forgotten homeless. It’s nice to let them know, “we’re thinking about you and we’ve been there”,’ she said.

Noel and Lisa both grew up in a council houses themselves, and have two daughters Amber, 21, who works in a nursery with children and Aysha, 17, who is about to go study law. Former police officer Noel, who spent 30 years on the force, runs his own private investigation company, while Lisa is an artist.

They reflected on their own situation compared to the single mum after living on her tight budget for the week.

‘I’m amazed she can do it and that’s with three kids.’