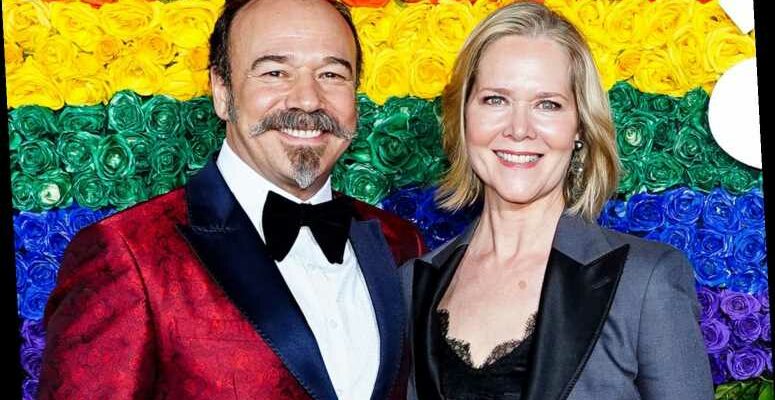 Broadway star Rebecca Luker's husband, actor Danny Burstein, is opening up about the actress's death in a moving new essay.

Burstein, 56, revealed in an essay for The Hollywood Reporter that Luker died from ALS complications on Dec. 23 at the age of 59 just 13 months after receiving her diagnosis in late 2019.

"There is a void," Burstein wrote of Luker's death. "Becca was complicated and serious, insanely beautiful and silly, and funny and sexy and strong and stubborn and brilliantly talented."

Burstein said Luker's diagnosis came after she began feeling weak in her ankles and feet. "She had spinal stenosis surgery and we were sure that would solve the issue," he wrote. "But her whole leg started getting worse."

The Moulin Rouge actor said Luker, whom he married in 2000, experienced a "steady decline" in health after she was diagnosed.

"Her hips, her diaphragm, her shoulders, her elbows, forearms," Burstein said of the loss of mobility Luker experienced. "When her hands stopped working she screamed in frustration." "She fought so hard and held onto every muscle for as long as her body would allow," he wrote. "And despite her body failing so obviously, she was still hopeful. The doctors told us that she "had the slow-moving kind of ALS." But they'd obviously been mistaken. She was progressing so ridiculously fast that it took everyone by surprise."

He added, "But still she was hopeful for some new trial medication to come along and save her life. She kept saying, 'I see myself growing old, being an old woman. I just know it.' "

Burstein said Luker accepted the possibility she might die two weeks before her death, rejecting her doctor's offer of a tracheotomy that — while it would have helped her breathe — would have prevented her from speaking or swallowing.

He recalled Luker said of the decision, "'If I don't have my voice, I don't know who I am. My voice is everything I am. I'll take my chances.' "

The actor said Luker inevitably lost "two things that she loved more than anything: her ability to speak and taste food."

"And so, in a way, she lived and died on her terms. If she couldn't do the things she loved the most, then she was ready to go," he wrote. "She'd fought so hard for so long. And she didn't complain, she remained positive and kind until the end."

Burstein was able to say final words to Luker, his wife of over 20 years, writing he "told her that she'd been the most amazing wife, a wonderful mother to our sons, and that she's left the world a better place because of her music and her beauty."

"She heard me. I know she did. Her eyes focused directly on me," he wrote. "She tried to respond as tears ran down my face and she did manage to acknowledge what I'd said with a sudden push of breath from the very back of her throat — which must have taken every ounce of strength she had." "The amount of love we received during her battle was unbelievable. A rotation of about 25 friends were here almost 24/7 for months," he said. "They stayed late into the evening to help me put her to bed and arrived early every morning to help me get her ready for the day. There is simply no way I could ever properly thank them. Angels all. Our community really showed up for my girl. I'll always be grateful."

He added, "Since Becca's passing the outpouring of support and love still continues. It's a testament to the kind of person she was."

Luker's agent Sarah Fargo confirmed to The New York Times in December the actress had died in a hospital in Manhattan.

In February 2020, Luker revealed on Twitter she had been diagnosed with ALS, commonly known as Lou Gehrig's disease.

"Hello friends. I have some tough news. Late last year I was diagnosed with ALS," Luker tweeted at the time. "I have the best medical care in the world and the greatest support.

She thanked her "dear husband" calling him "an angel."

Luker stayed positive, writing, "I will get well. In the meantime, we fight and go forward. Keep us in your thoughts."

The actress made her Broadway debut in 1988, joining the cast of the Phantom of the Opera as an understudy for the original star Sarah Brightman and taking over as Christine in 1989.

She was a three-time Tony Award nominee, receiving her first nomination in 1995 for her role as Magnolia in Show Boat and her second in 2000 for her leading role in The Music Man. Her third nod came in 2007 for Mary Poppins.

Luker is survived by her husband and her stepsons, Zachary and Alexander.