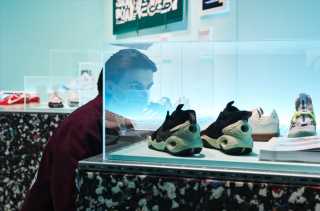 LONDON — Look down and check out those kicks.

Slightly delayed due to the COVID-19 pandemic, the long-awaited exhibition “Sneakers Unboxed: Studio to Street” at the Design Museum on Tuesday opened its doors to London’s museum- and art-hungry residents.

With the goal of attracting a younger and more male audience to the museum, and to make the history of design and culture more approachable, the exhibition provides an in-depth look at how sneaker culture took the world by storm, and how sneakers blended fashion and art to become hot assets for investors. It also examines the innovations in the product category, and gives the audience a preview of what the future of sustainably made sneakers might look like.

Ligaya Salazar, curator of the show, told WWD that the exhibit is a prime example of the role “young people from diverse backgrounds have played in making individual sneakers into style icons and in driving an industry now worth billions.”

Derek Morrison, senior director of Europe at the global resale platform, said StockX and the Design Museum will “build on their partnership through a number of additional activities, from product collaborations to immersive public program events, all aimed at championing the design and integrity of sneakers to as wide an audience as possible.”

He added that StockX decided to support the exhibition because it is in line with one of its core values, which is to “provide people with access to the products and passions they love.”

“From OG sneakerheads to fashion enthusiasts and people fascinated with performance through design…We’re excited for visitors to find out more about something we’re incredibly passionate about,” he said. 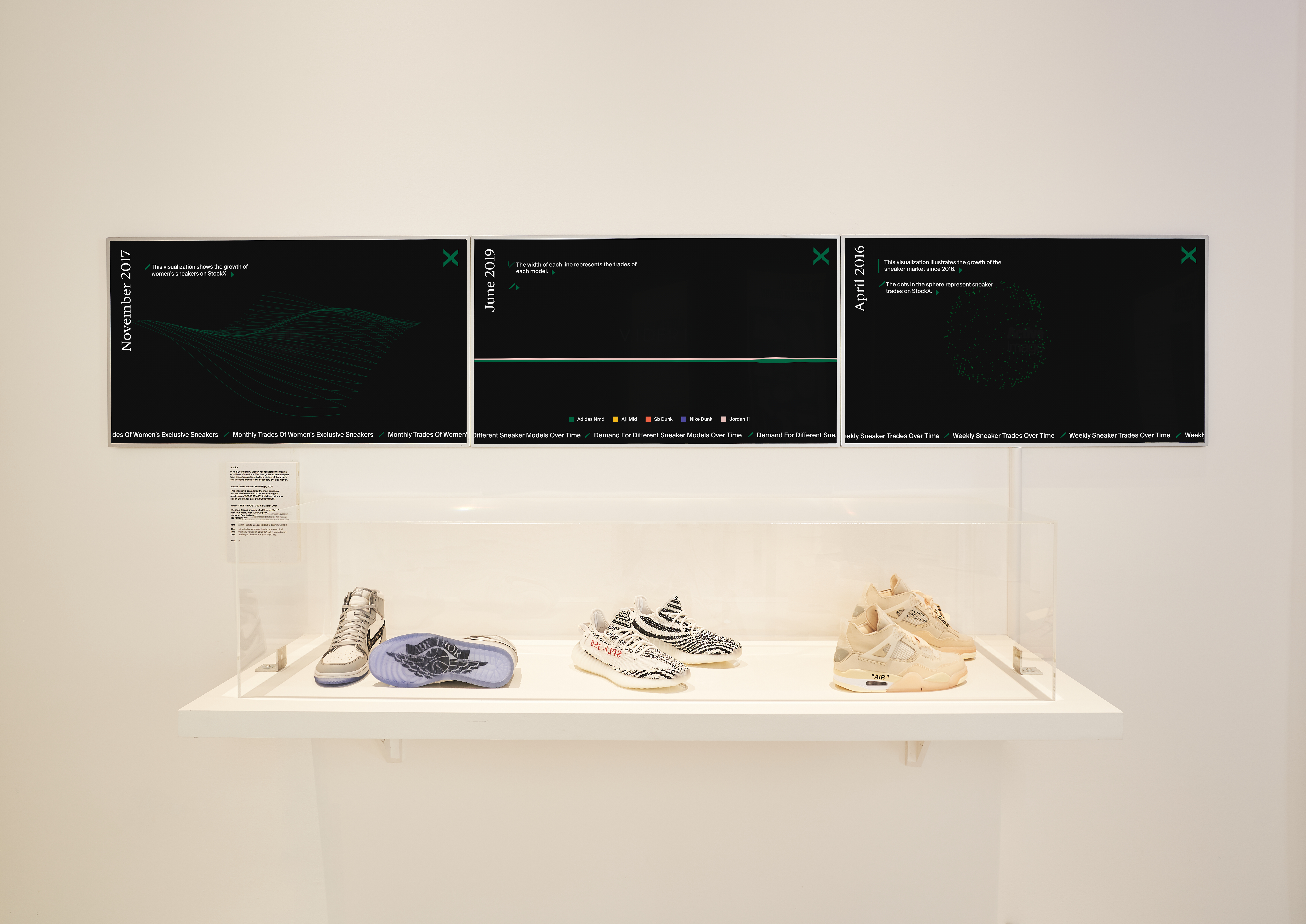 The exhibition features some of the hottest models among the resale community, including three sneakers that StockX deemed culturally important and have had a financial impact on the sneaker market. They are the most valuable sneaker release of 2020, the Jordan 1 Retro High Dior; the most hyped women’s sneaker release of 2020, the Jordan 4 Retro Off-White Sail, and the most-traded of all time, the Yeezy 350 Zebra. 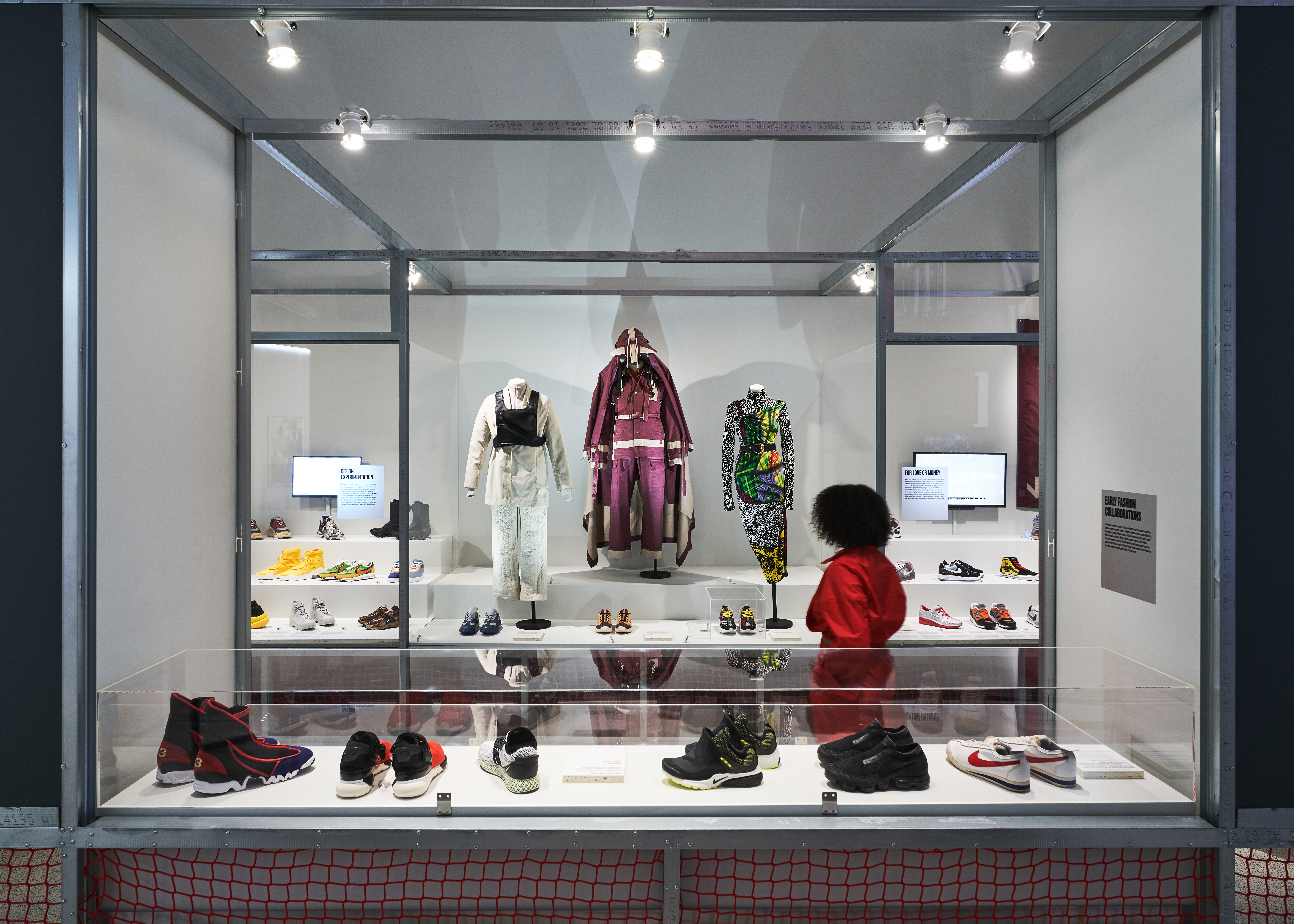 Salazar’s personal favorites are the sculptural Martine Rose x Nike collaboration, and the Nike SB Dunk High “Flom” model with a money pattern on it, released in 2004 in collaboration with street artist Futura 2000 to celebrate the opening of his store in Fukuoka, Japan. At that time, Japan was the center of sneaker culture and became a hub for experiments between select small retailers and progressive artists and designers with a cult following.

“The comments he made with that shoe, questioning whether members of the sneaker community were in it ‘for love or money,’ was kind of at the tipping point where sneaker culture was changing from being just about their own community, to people who are just queueing to sell them, which was the early beginning of the resell culture,” she said.

The show highlights how social movements and youth cultures — such as the West Coast Skaters, the Casuals, Grime, and the Bubbleheads in Cape Town and key small retailers around the world such as Footwork, Reed Space in New York, and Patta in Amsterdam — pushed the sneaker culture forward.

On top of sneaker culture, Salazar puts a heavy emphasis on sustainability in the exhibition.

“I think it is the most important design concern for the industry right now, which is why brands are dipping in and out of that, some are more committed to it than others, but it really is the place where the future of the industry lies. Solving that in a way both associates the need to have other things and also not harm the environment in such a significant way,” she said. 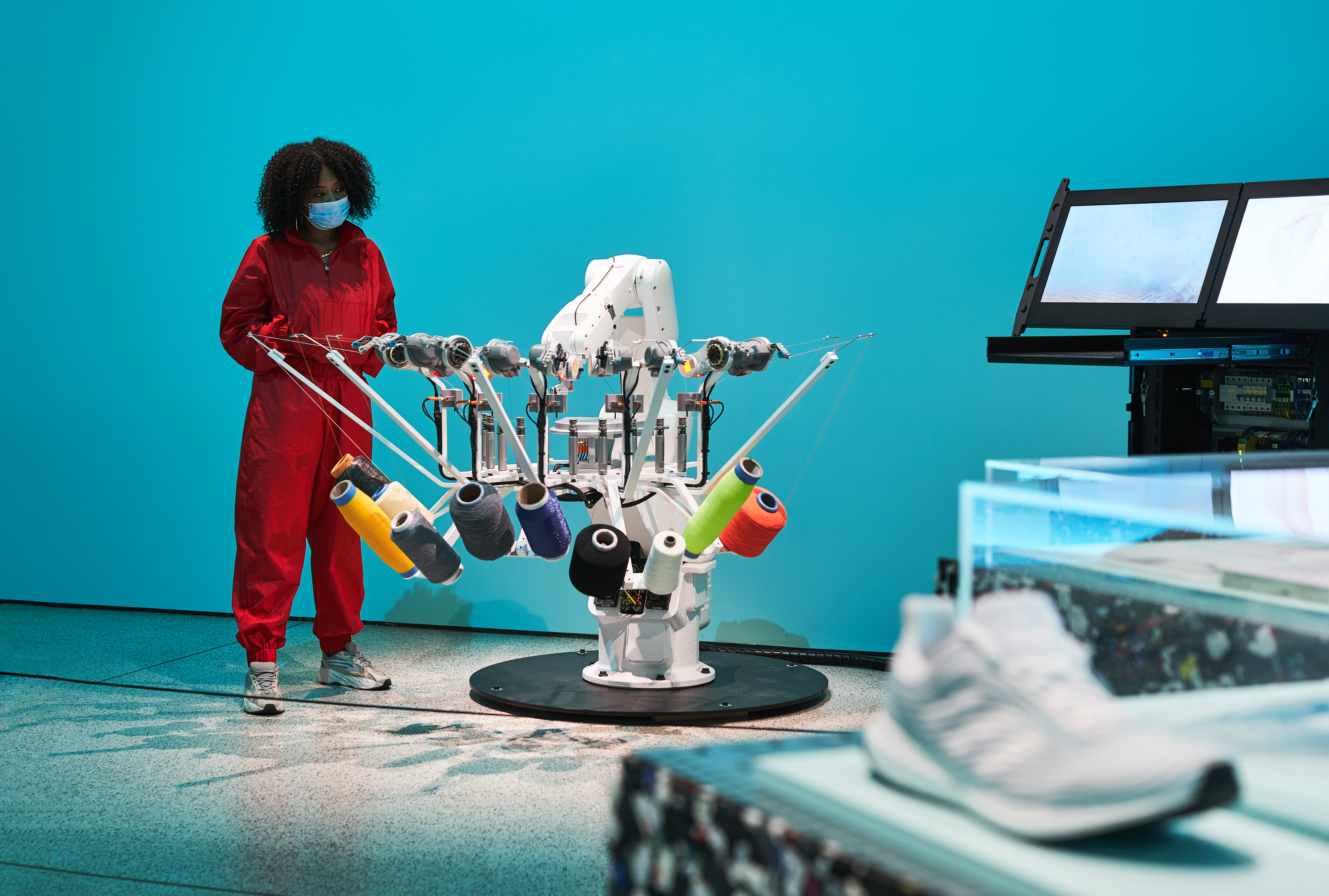 The centerpiece of this part of the exhibition is the futuristic-looking shoemaking robot FutureCraft.Strung from Adidas designed by Kram/Weisshaar, which is capable of making an upper out of just one piece of yarns.

This section also showcases some of the most technologically advanced and innovative footwear styles throughout history, from early experiments by Nike, such as the classic blue and yellow “Waffle” sneaker and Reebok’s signature “Instapump Fury,” to the marathon record-breaking Nike “Alphafly NEXT%” and self-lacing “Fit Intelligence” shoe by Puma.

To further engage with today’s mobile-first generation, the Design Museum taps into the NFT trend in partnership with Snap by offering a pair of virtual sneakers for visitors and everybody around the world to try on.

Josephine Chanter, director of audiences at the museum, said the collaboration allowed it to “explore the emerging world of sneakers designed only to be worn virtually and, in a world, first, use machine learning to create the ultimate sneaker.” He can’t wait to see “how sneakerheads around the world react to the design.”

Sneaker Resale Sites: A Hot Category in Midst of Pandemic

StockX: Global Sneakers Resale Market to Reach $30B by 2030

Luxury Brands Are Running Fast With the Sneaker Trend

What Are NFTs, Why Should Fashion Care and Will This Bubble Burst?